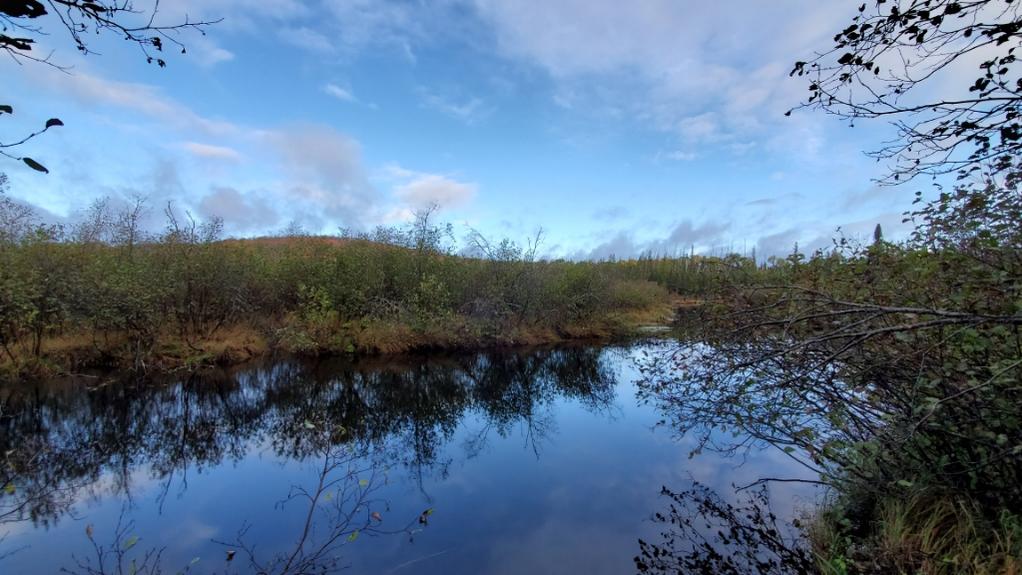 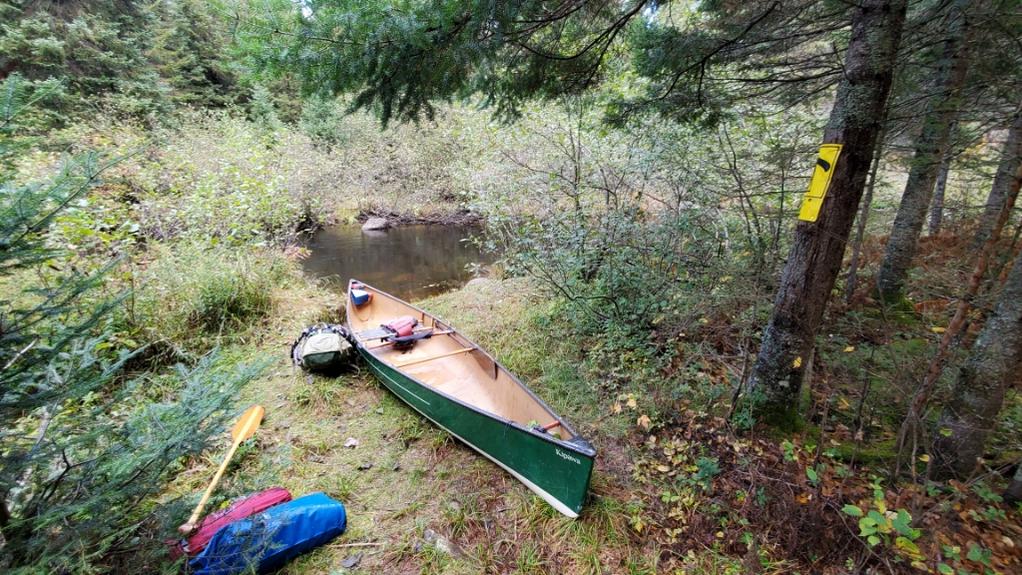 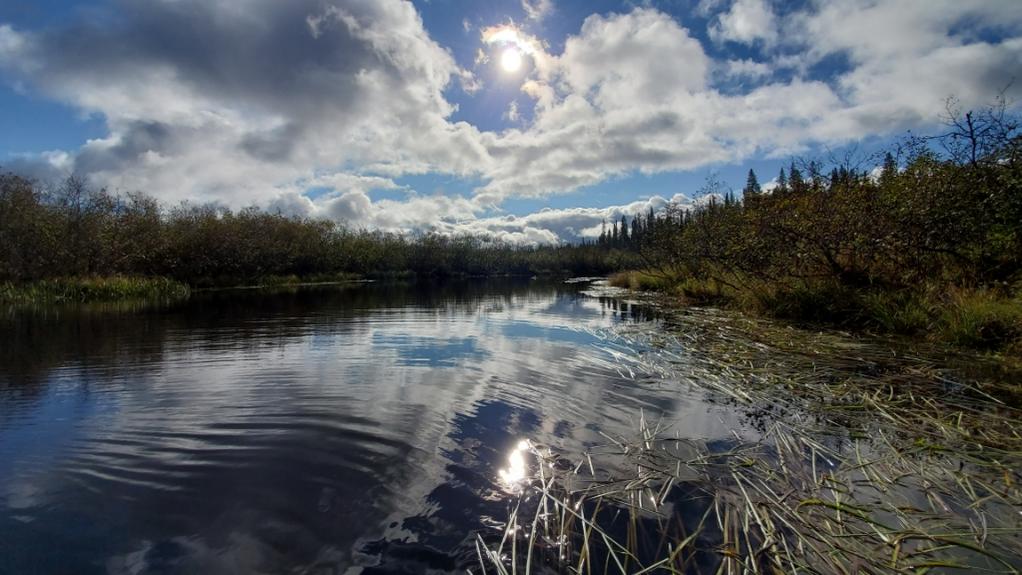 As I was cutting firewood, something hit me. There was no grill at this campsite. Normally, that wouldn’t pose too much of a problem, except I decided to try something new for a meal and it absolutely required a grill (or so I thought). I picked up a pre-cooked rack of ribs that you just toss on the grill, heat up and serve. Now how the hell am I supposed to cook a rack of ribs with no grill? My only hope was to go check the other campsite for a one. I jumped in the boat, paddled over to the worst campsite in the world, and of course it did not have a grill. Buzz kill.

Pulled over to take a short break and have a snack 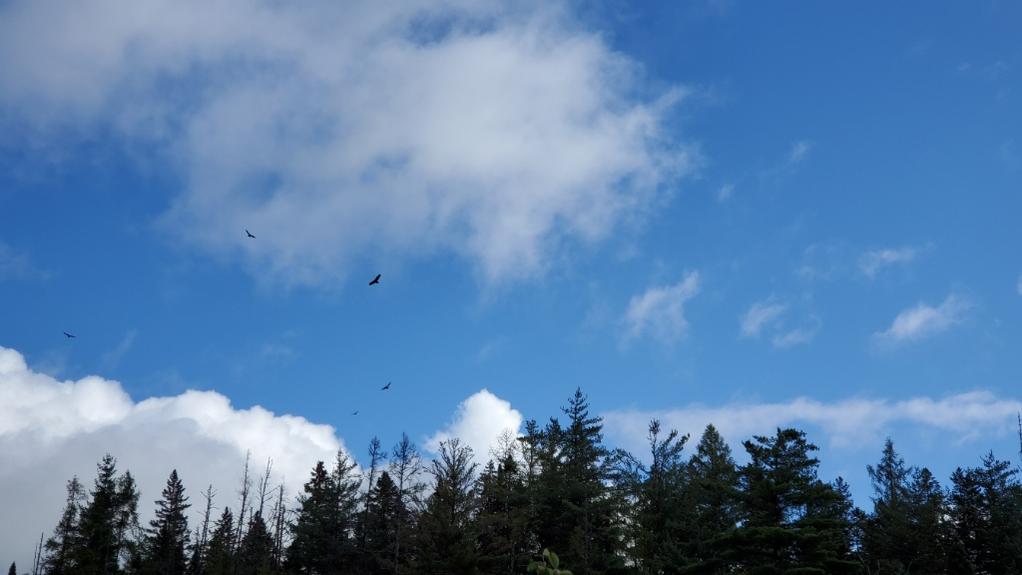 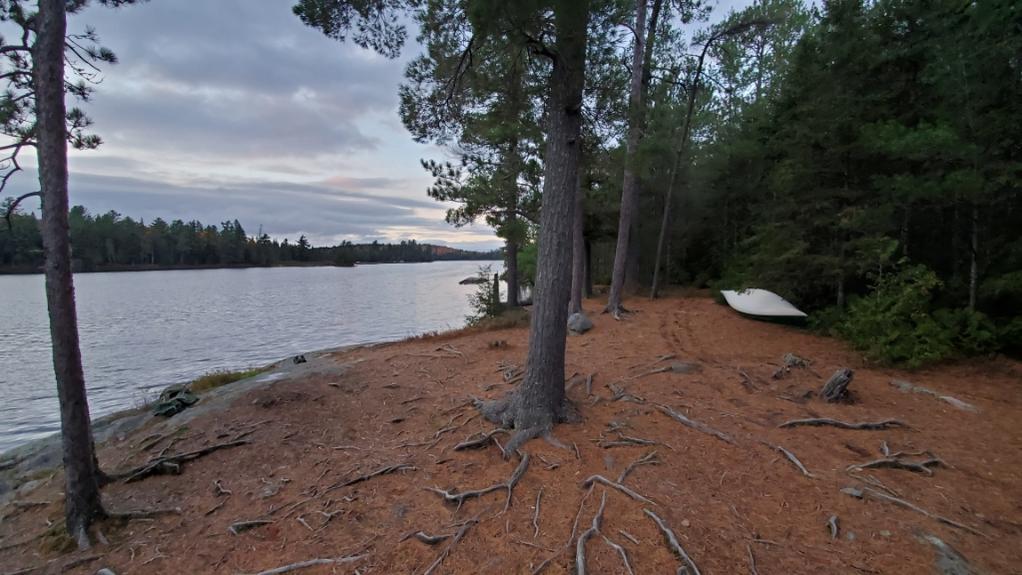 I took the campsite on the east shore point – a beautiful site – but definitely a summer campsite. It was a little more exposed than I had hoped and unfortunately the wind kicked up, bringing rain with it as well. I quickly unloaded the canoe and placed my gear among the cedars in the driest spot I could find. The rain subsided a bit so I quickly set up my tent in a place where it would be protected from the wind and rain. 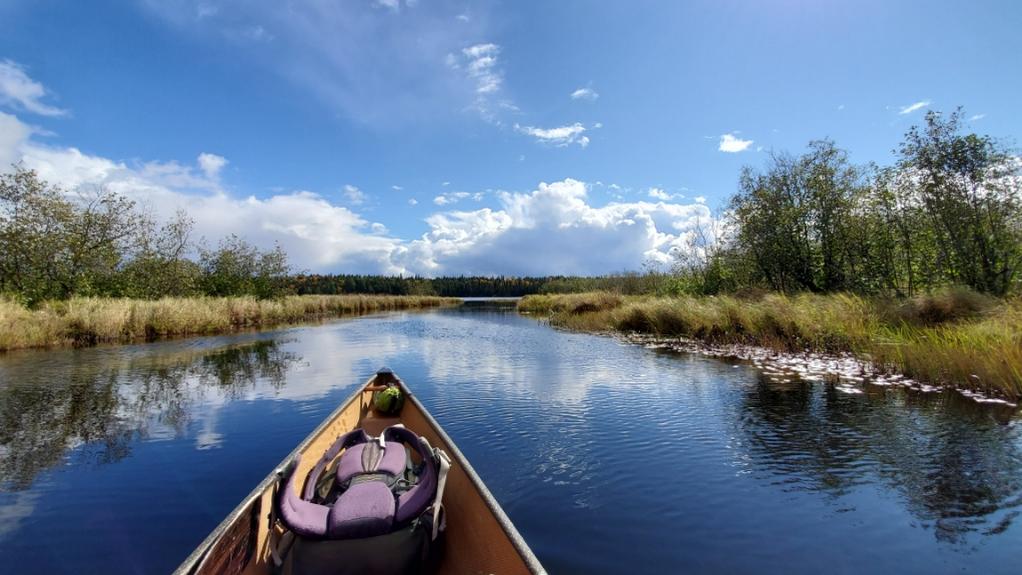 All packed up and ready to continue on my journey 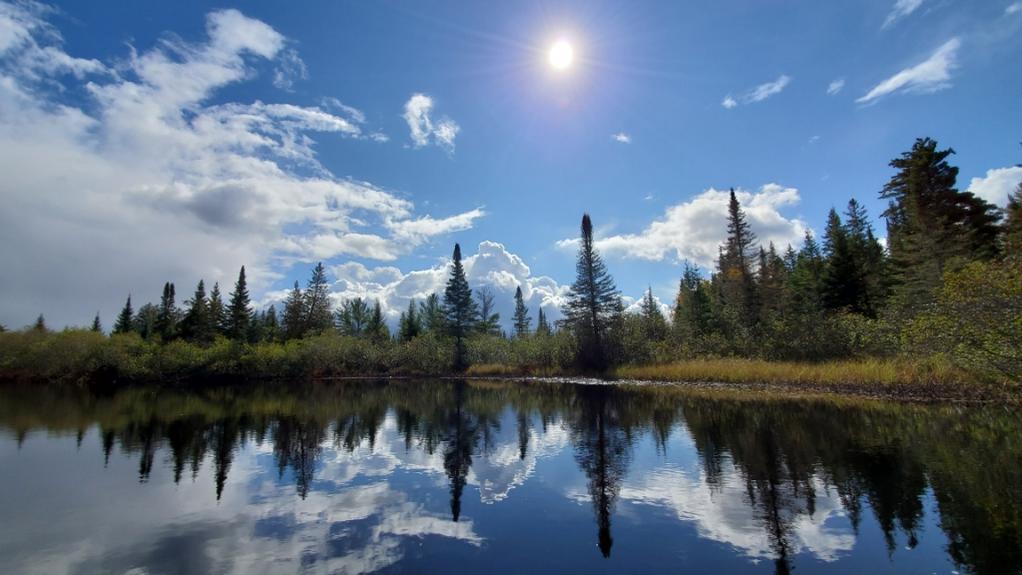 Awake and out of the tent by 8am. I was greeted with a bright blue sky – today was looking pretty damn good! I was a little excited to get moving because I was spending my next two nights on Shippagew Lake – a lake that I have wanted to visit for a long time now.  ​ 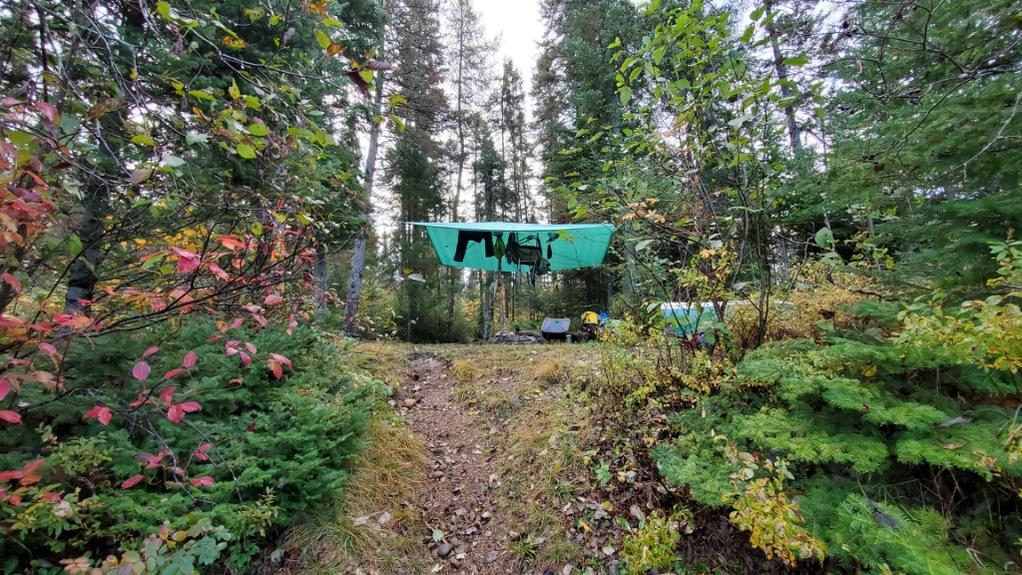 And just like that, it was a beautiful day again 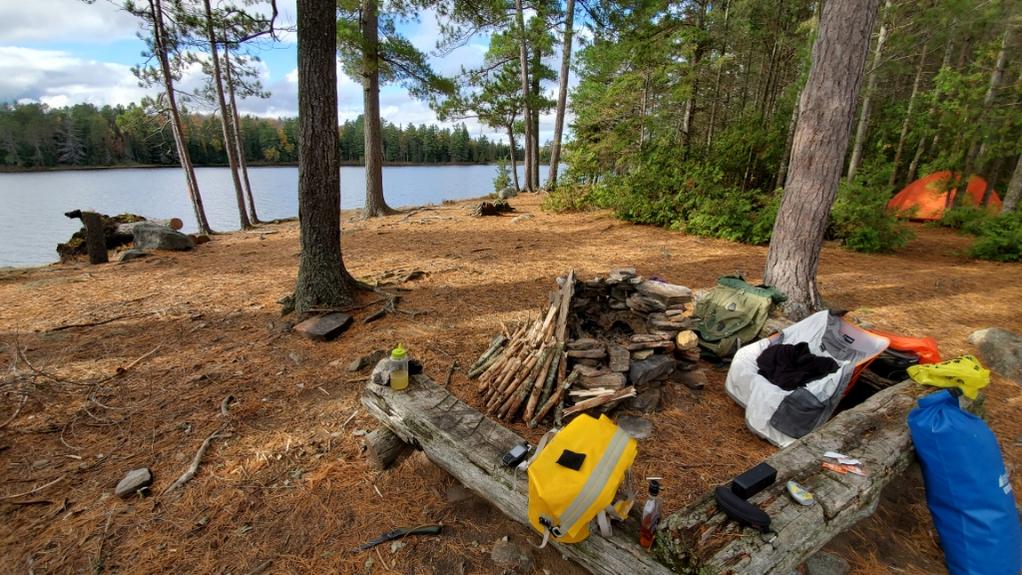 The sky was still blue and I was thrilled to be paddling such a beautiful section of river on a day like this. Lighting can totally change the mood (remember the Queer Lake narrows? Yeah.). As I entered the wider parts of the river, I was greeted by several otters. They can be a little skittish at times and I was unable to snap a clear photo - but I did manage to get some decent footage of their curiosity. I’m not sure if it was the same group following me, or if this river is just infested with otters, but they seemed to be everywhere. I noticed a dozen or so hawks circling high above the forest off in the distance – a dead ‘something’ must be there. 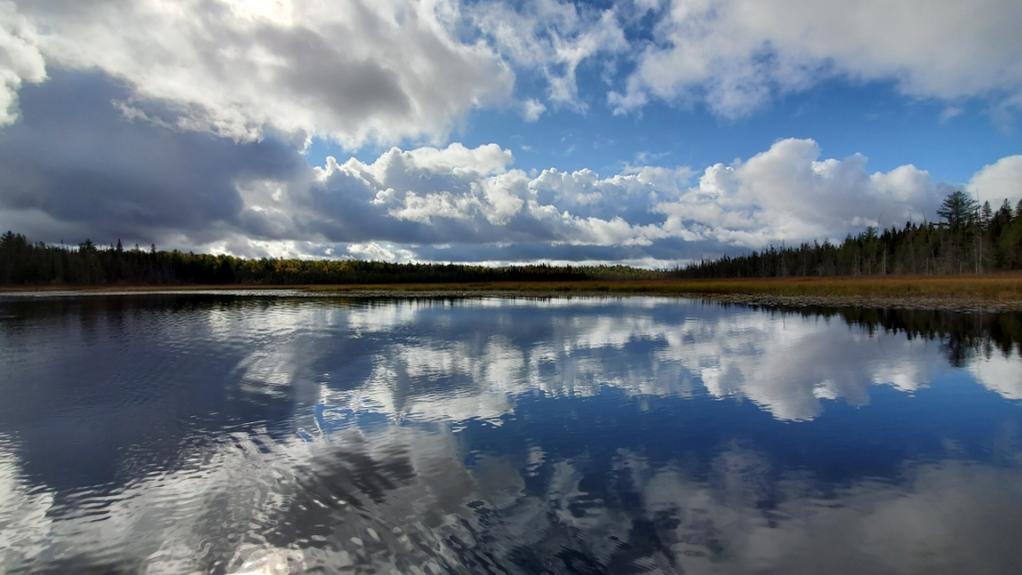 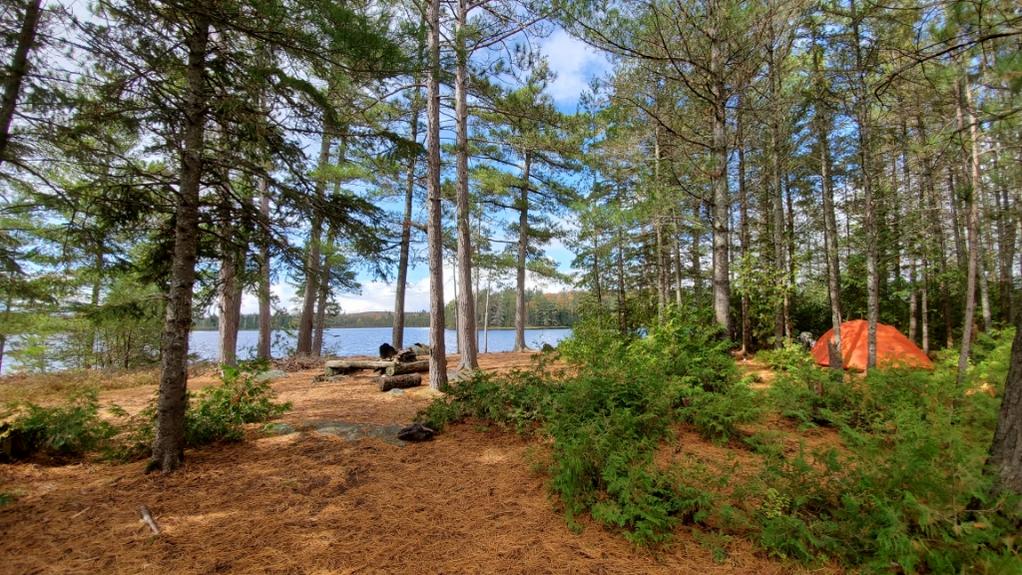 As quickly as the rain showed it, it stopped and I was back to blue skies. There has been a lot of back-and-forth on this trip regarding rain – so when the sun came out I spent a couple hours gathering enough wood for the next two of days. 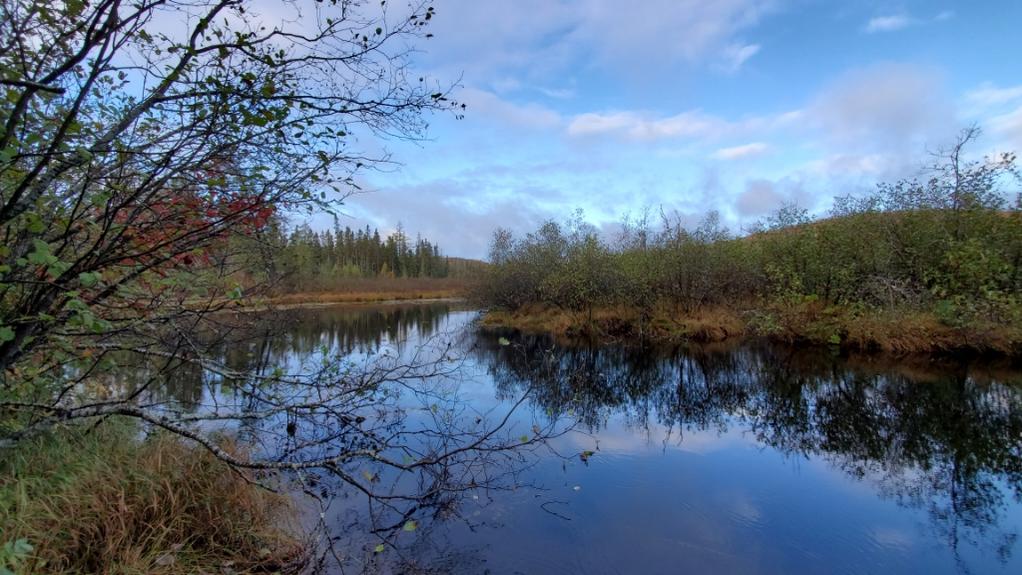 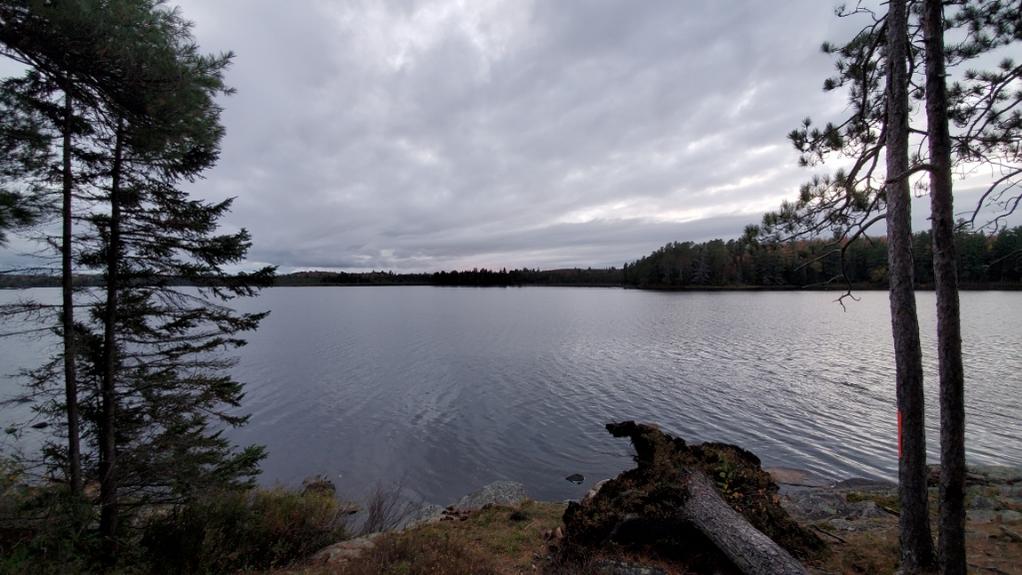 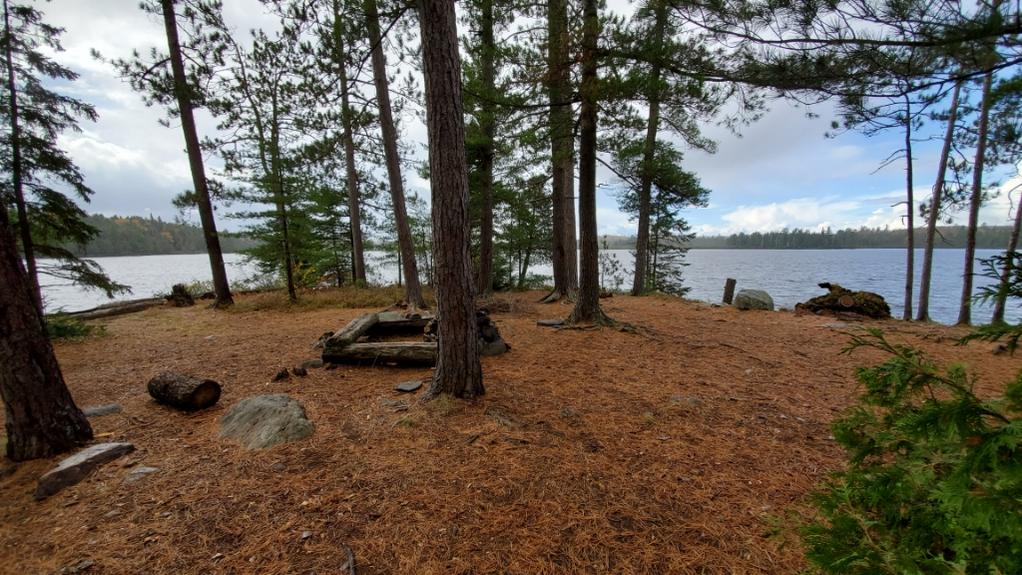 Back to a bright, sunny day!

A decent mix of sun and clouds

Not much further to Shippagew Lake now

The river is finally getting a bit wider

A curious chonk of a moose 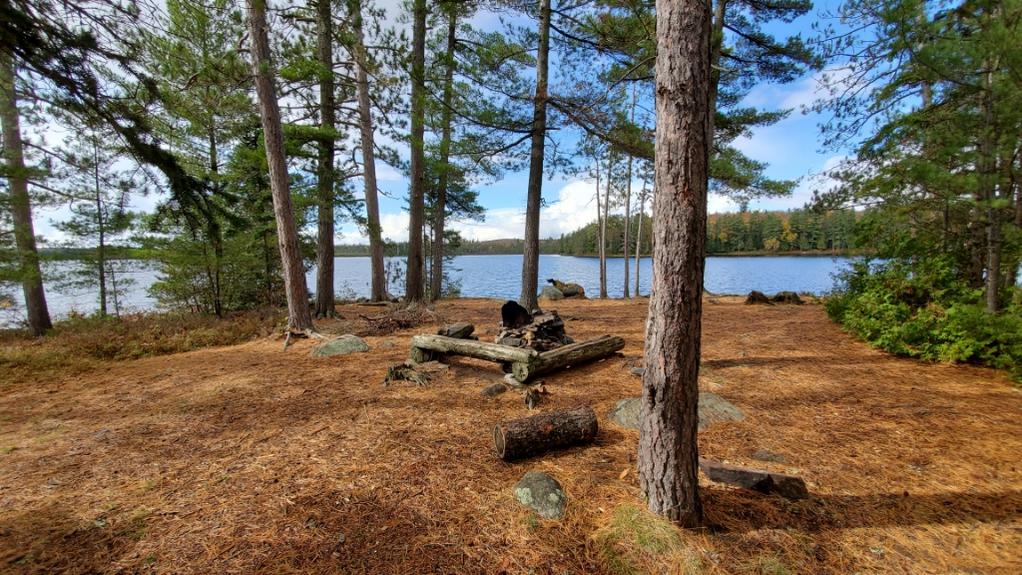 Once back at camp, I poured some whiskey and enjoyed an evening fire. I thought about different ways I could cook my dinner, but they all ended with the same vision: Ribs fall into fire and I remain hungry. Eventually I decided this wasn’t going to happen over the fire, so I busted out my stove, cut the ribs into smaller chunks and blackened them in a non-stick pot. Worked surprisingly well, they were delicious! I spent the rest of my night drinking whiskey by the fire, eventually shutting ‘er down at 11pm.

Seems to be raining on my side of the lake only

Looking north up Shippagew from the western campsite 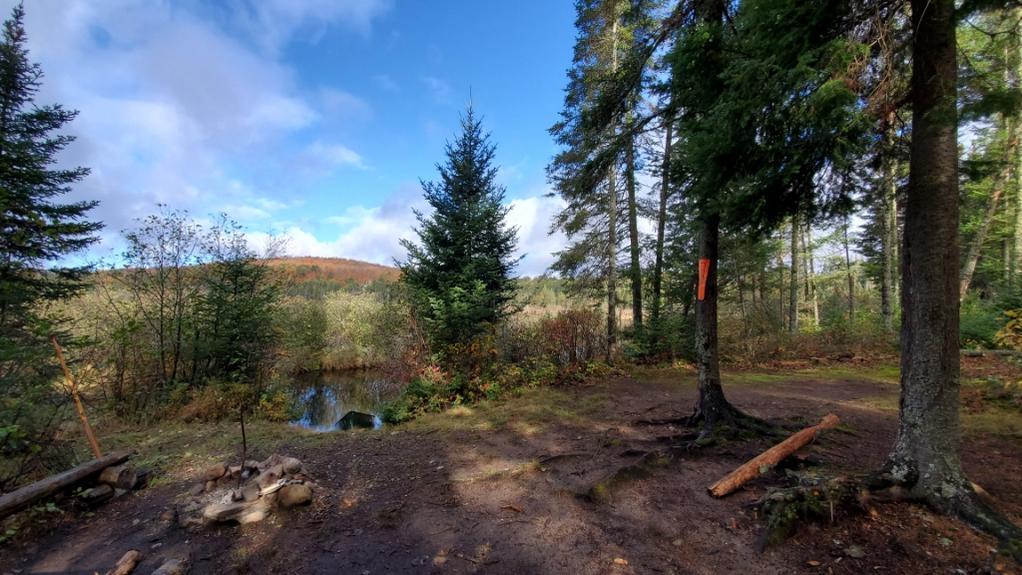 Looking upstream on the Tim River from my campsite - Blue skies today, nice! 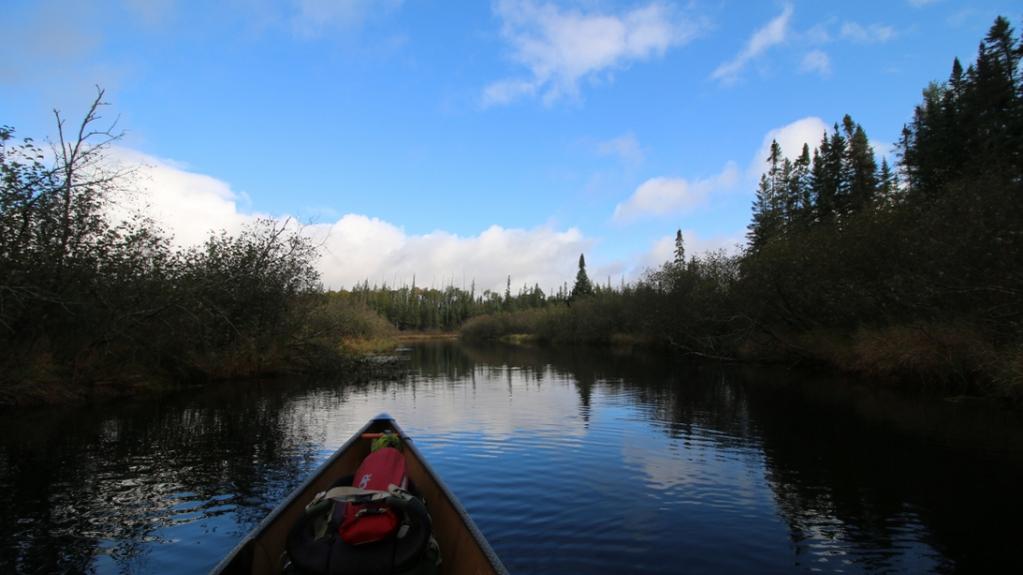 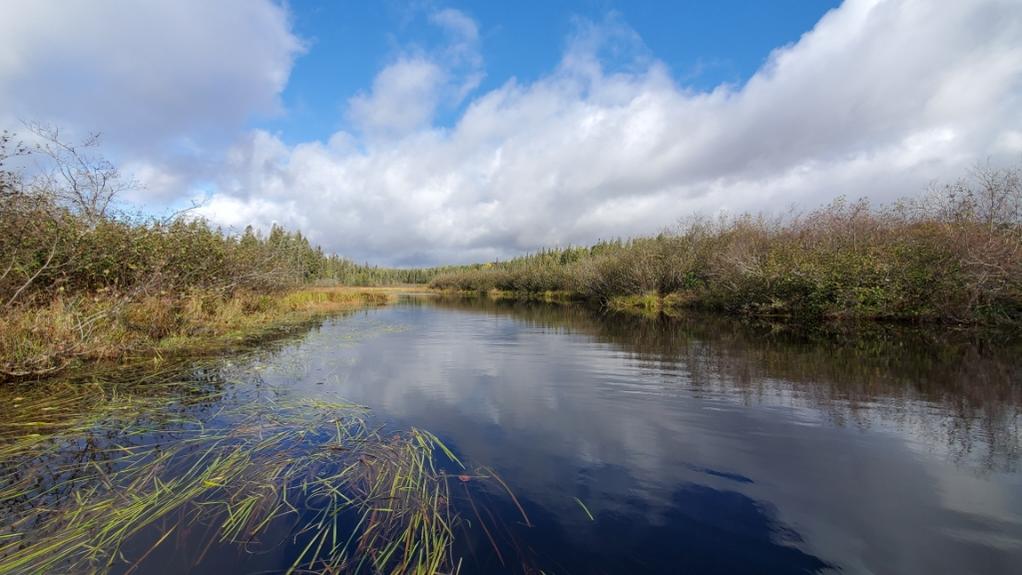 Beautiful morning for a paddle down the Tim​

My explanation is: Must be a dead moose or deer below... or they know something about my future that I don't

Pretty sure I set a record for fastest tent setup. It's amazing how much motivation a little rain can give

I'm not complaining, but what a mixed-bag of weather today 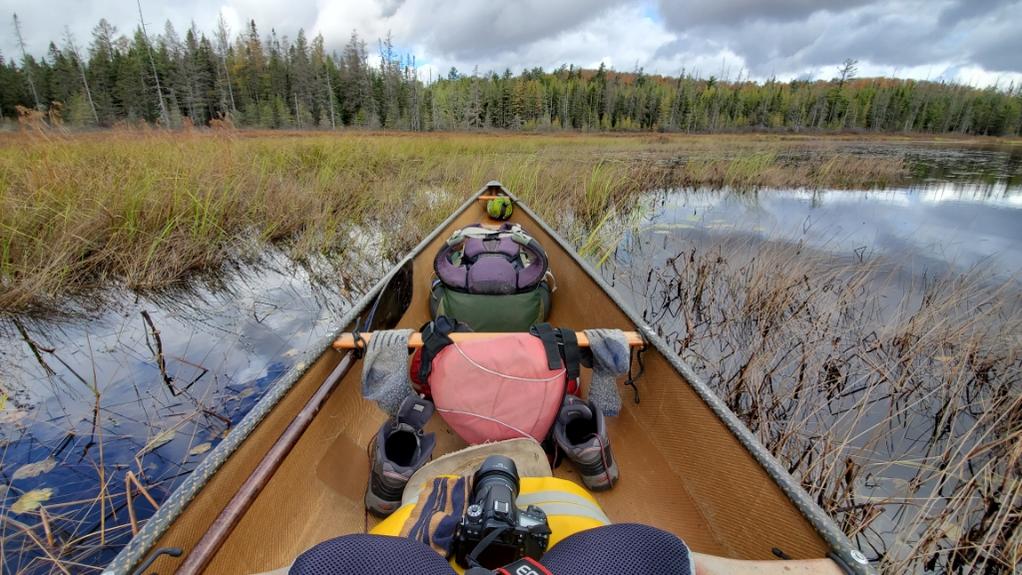 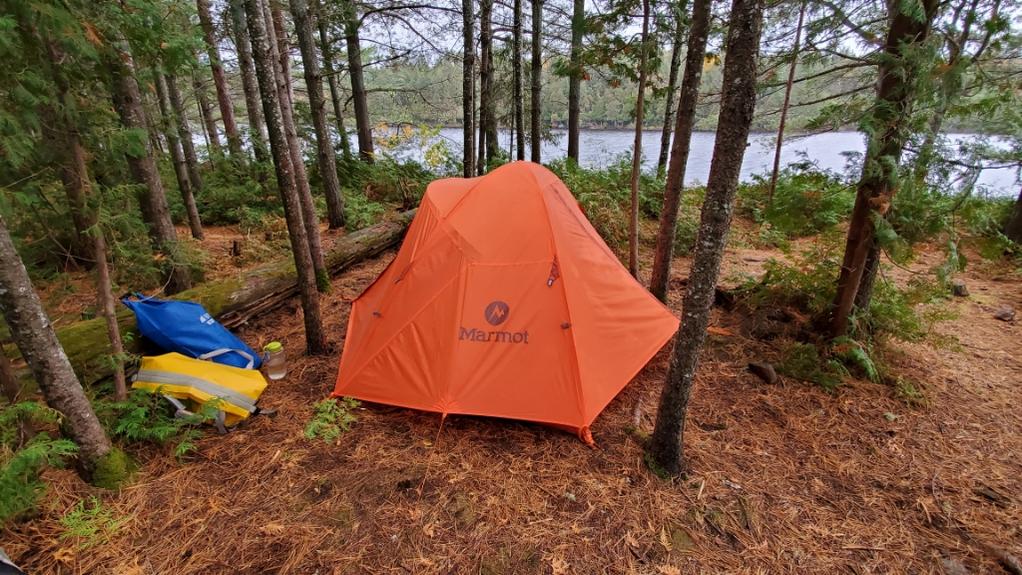 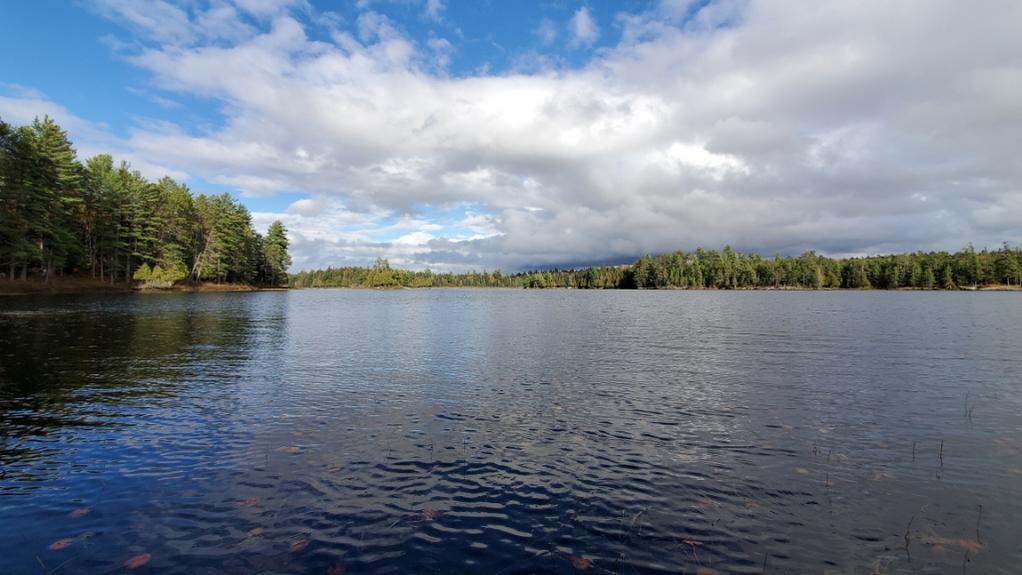 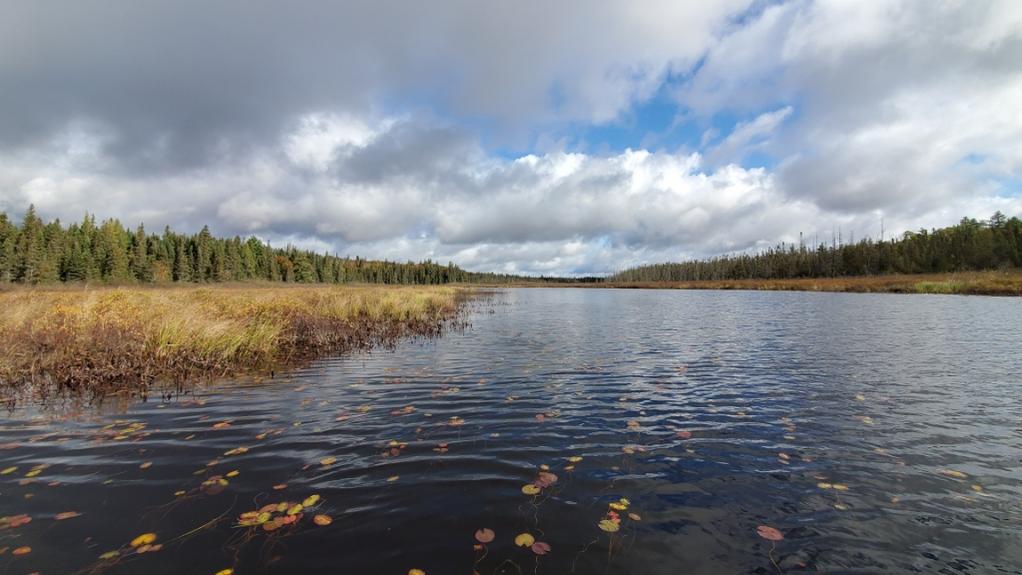 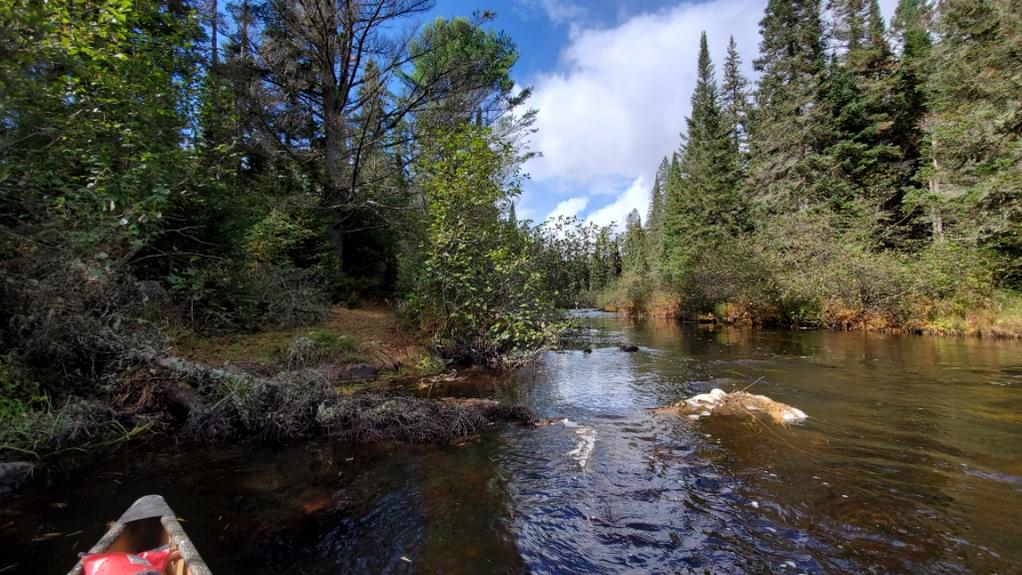 My campsite, as seen from the water

Just before I hit my one and only portage of the day, I spotted a bull moose off in the meadow. He seemed pretty interested in me, so I was glad there was a good distance between us. By noon I arrived at P125 and took no more than a few minutes to make the crossing. The sun was still shining and I was grateful for it. A few more twists and turns and I was at the end of the Tim river, entering Shippagew Lake. 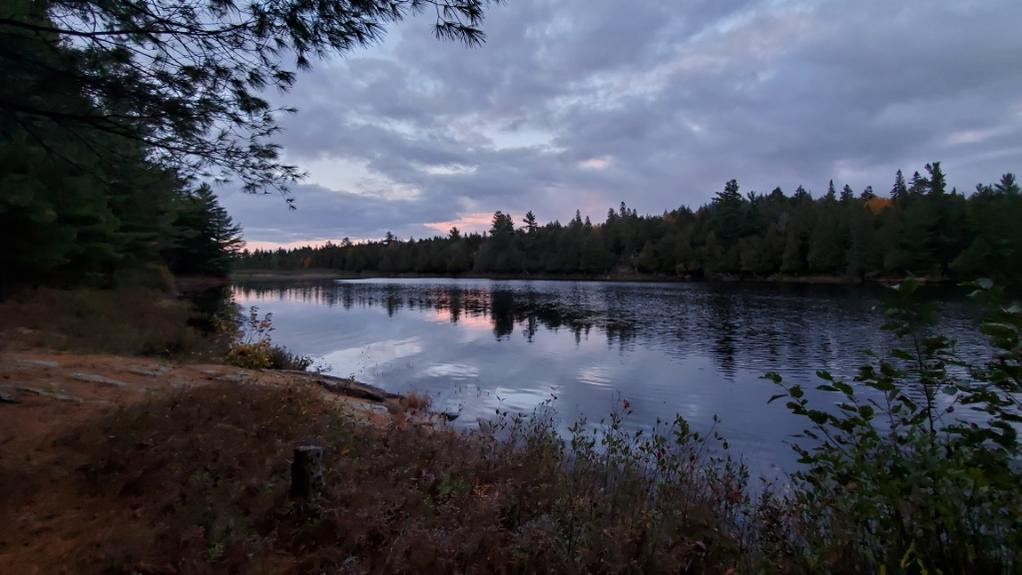 Again, this morning I opted to skip the BLT in favour of a quick breakfast solution – oatmeal and coffee. Not my favorite, but it does the trick. I tore down camp and was on the water by 9:30am. 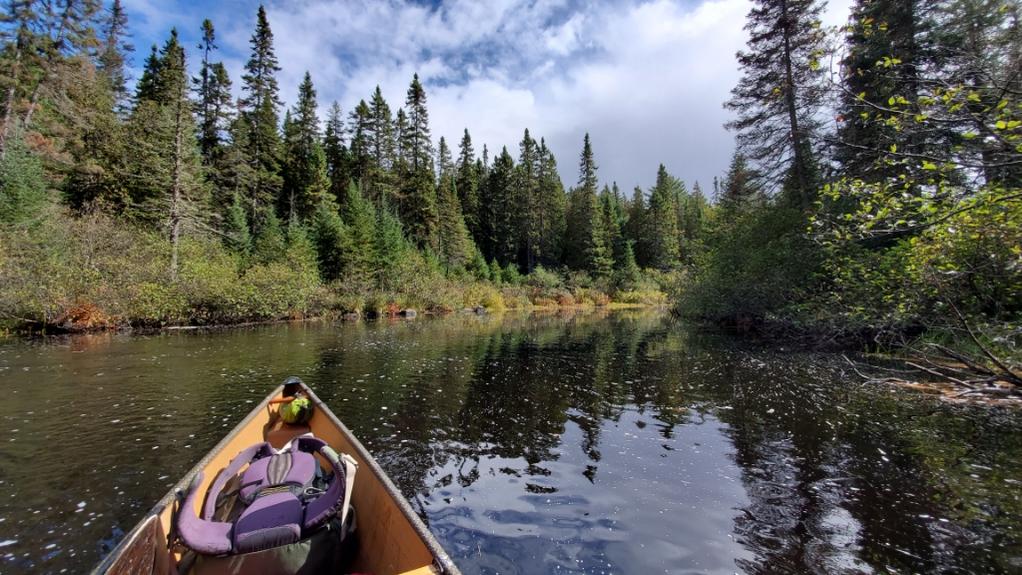 There she is! Shippagew Lake

Evening brought the clouds back - but at least it's not raining 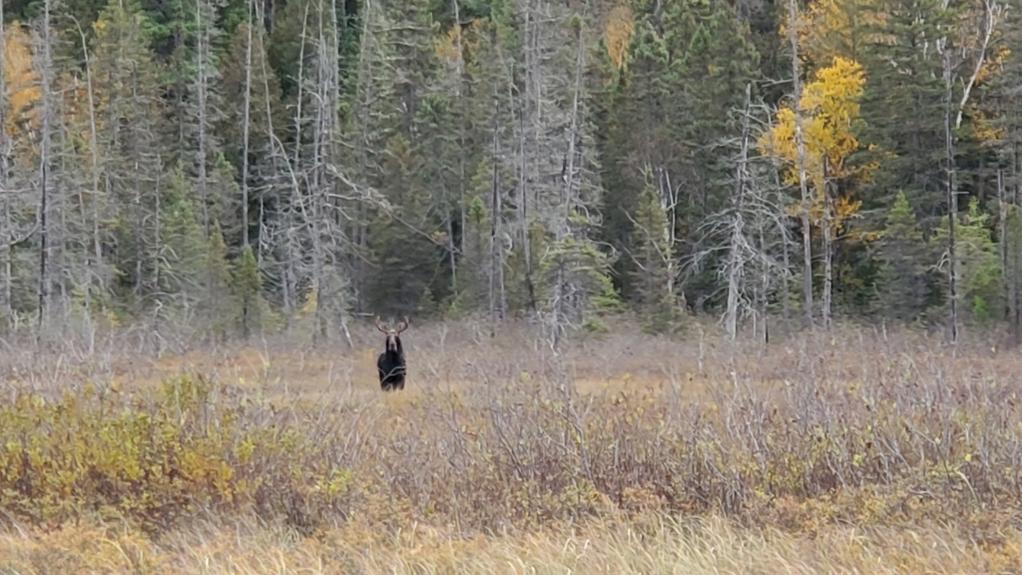