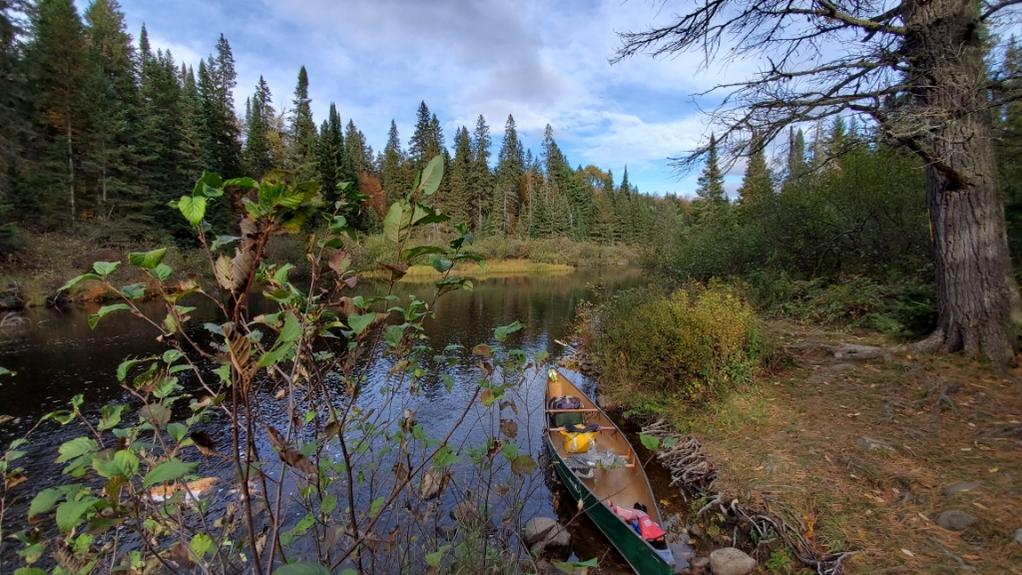 By 6:30 I was getting hungry, so it was time to light the fire and let it burn down to coals. Those who know m/camp with me knows the drill for a night one dinner: Steak, grilled veg. Works every damn time. While my food was cooking, I was treated to a bizarre hazy pink evening. Dinner ready and I sat in front of the fire, facing the river to take in the beauty while I chowed down.

So peaceful - until that damn moose decided to show up

With dinner done, campsite clean and my food hung, I mixed a drink and relaxed next to the fire. Then an idea popped into my head – I remembered the warden saying I might hear wolves in the area. So I stood on the shore and let out a few howls then went silent waiting for a reply. Nothing – so I let out another howl – as loud an accurate as I could. Mistake. Big mistake. Down the river, I hear something knocking around – a strange sound, almost like chopping wood, but that was impossible. I went dead quiet and heard a large splash in the water – maybe 50m down river. It was pitch black and I couldn’t see anything, even with my headlamp. The splashing continued and was coming towards me, grunting the entire time. I will tell you right now – I was scared shitless – I knew I just pissed off a bull moose, and it’s the middle of the rutting season. I grabbed nearly all my firewood and tossed it on the fire to make it as big as possible. I kept one large ‘stabby’ stick (yeah, I know, I didn’t stand a chance) then sat in silence and fear, waiting. I still couldn’t see him, that is, until he climbed the bank on the opposite shore and walked across the peninsula back into the river. He was a chonk if I’ve ever seen one and he did not leave. I could see my headlamp reflecting off his giant eyeball just up river and half hiding behind a bend. What the hell have I done? 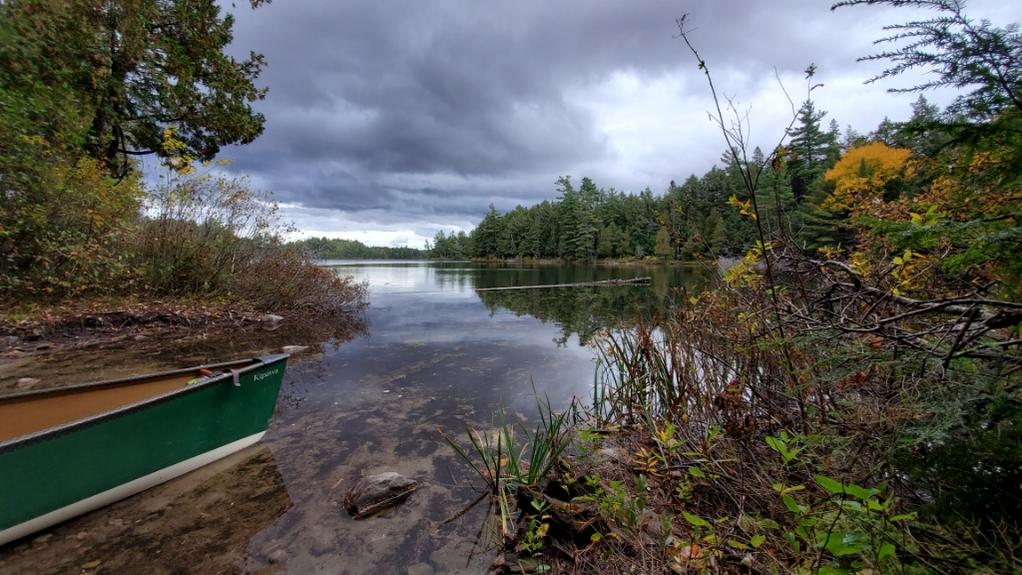 Just gonna squeeze past on the left.. hopefully

Cliff along the southern shore of Ralph Bice Lake. Note the color of the water 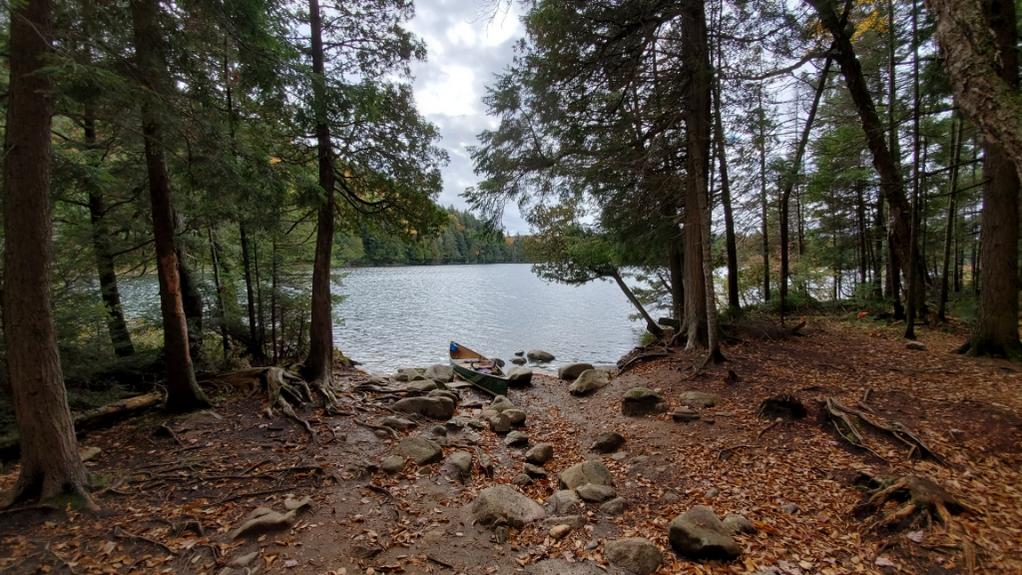 Noon is a late start on its own, but it’s even worse when you’re double carrying. The plan for this trip was to double carry the first 3 days, then single carry the final 5 days. I did this to allow for better food options and enough whiskey to last over a week. Just as I was pulling away from the dock, a canoe was approaching me – they said something, but I didn’t quite hear them. I noticed they were b-lining for me, so I stopped and waited. It was two wardens, just doing warden things. We chatted for 10 to 15 minutes, went over my route and they checked my permit. They noted the campsite at the Little Trout Creek junction was a great spot to hear wolves at night. We got onto the topic of maps and they brought up the new Unlostify map. I told them I am close friends with the map makers and informed them the map is delayed. They asked if I knew when it was scheduled to be released, to which I replied ‘Funny you ask, meet me on Rosebary in a week and you can ask them yourselves’. We parted ways and I headed around the corner to meet my first portage of the trip. I wondered if I’d see them next week on Rosebary Lake. 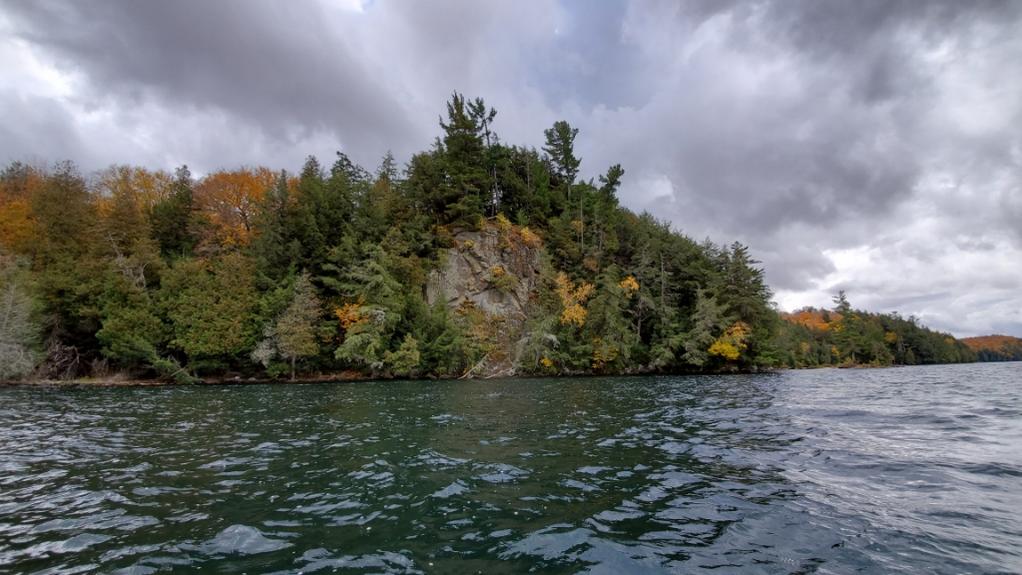 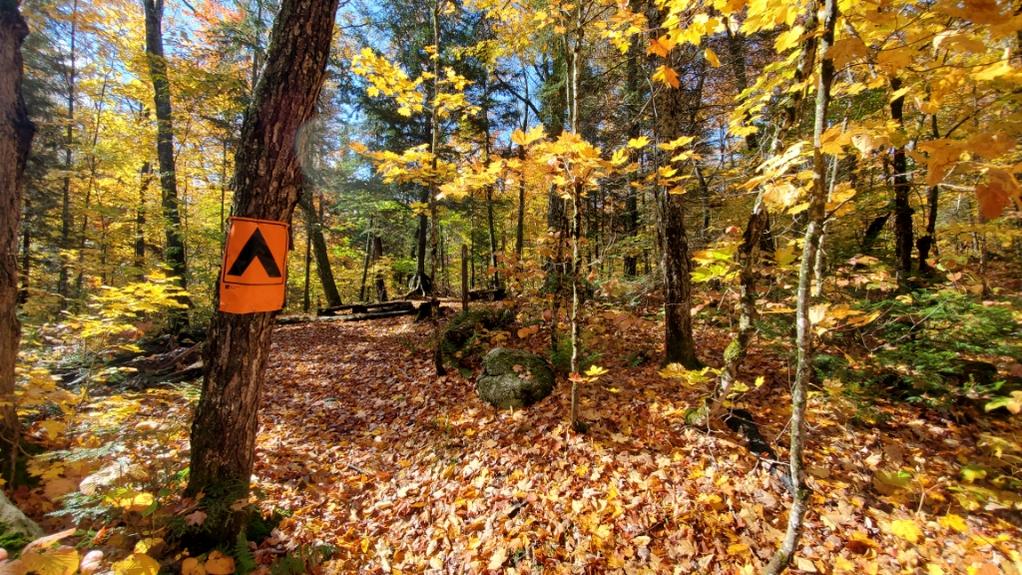 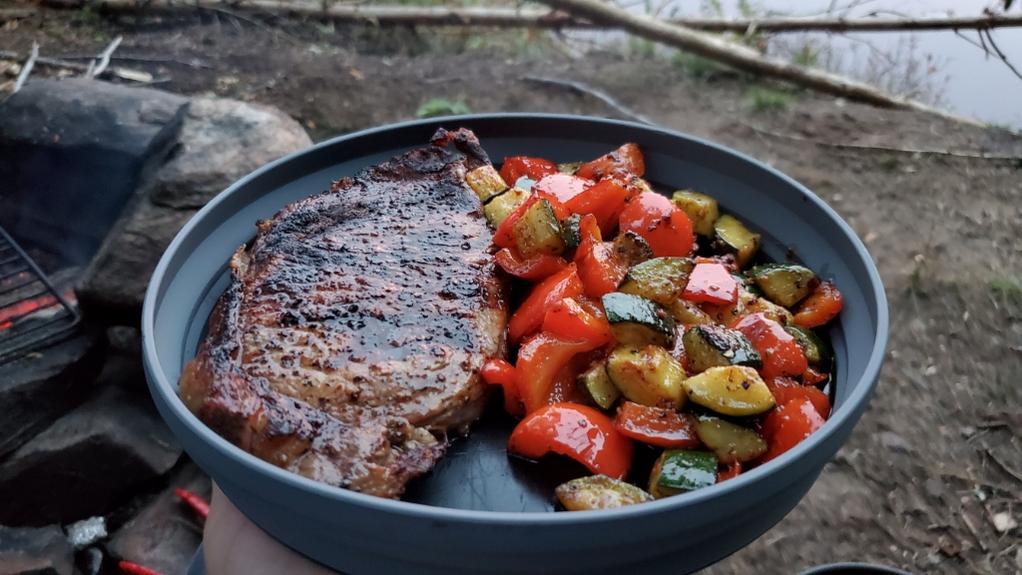 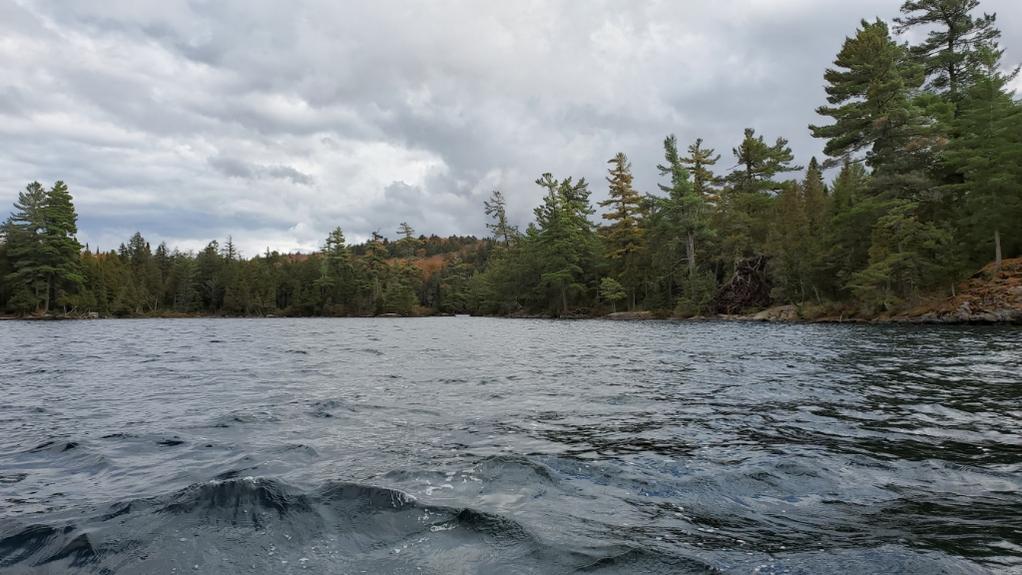 I can see where the previous name 'Pine River' comes from

Sure, I was solo at Basin Lake a few weeks back, but that was base camping and super luxurious (remember the ice? I do). What laid ahead of me was an 8 day, 90km loop – mostly through new territory, which is rare for me at this point. The nice thing about this trip was I wouldn’t be solo for my final night – my bud’s Jeffrey & Deki (of Unlostify) were on a trip of their own, and we arranged to be on the same lake for my night 7 (their night 9) so we could catch up in person. I arrived at the parking lot a little late by my standards and I wasted no time unloading the car eventually launching just before noon.

Ready to cross the first of four portages today. A quick 440m jaunt over to Bandit Lake

My view for the night - not too shabby! 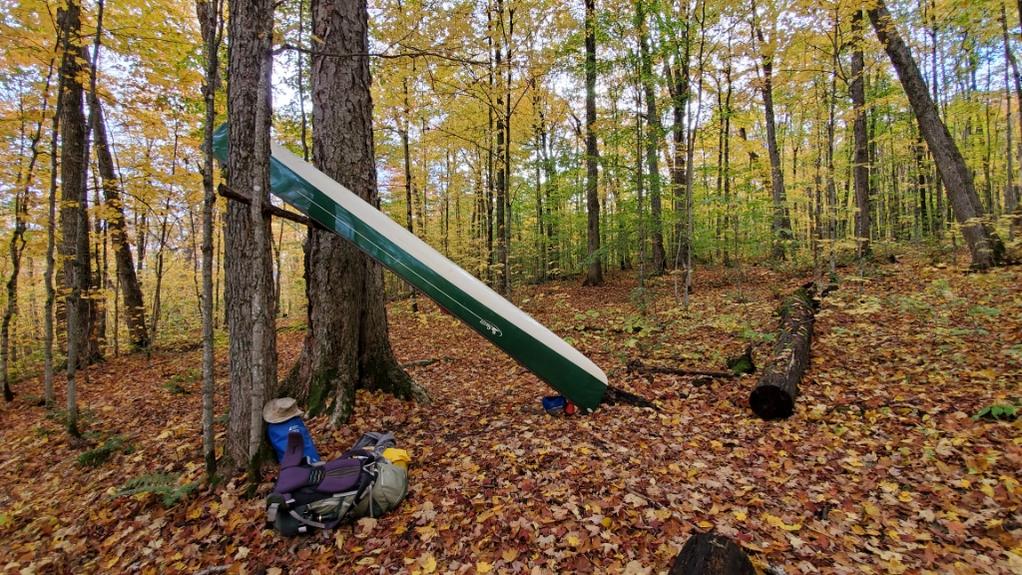 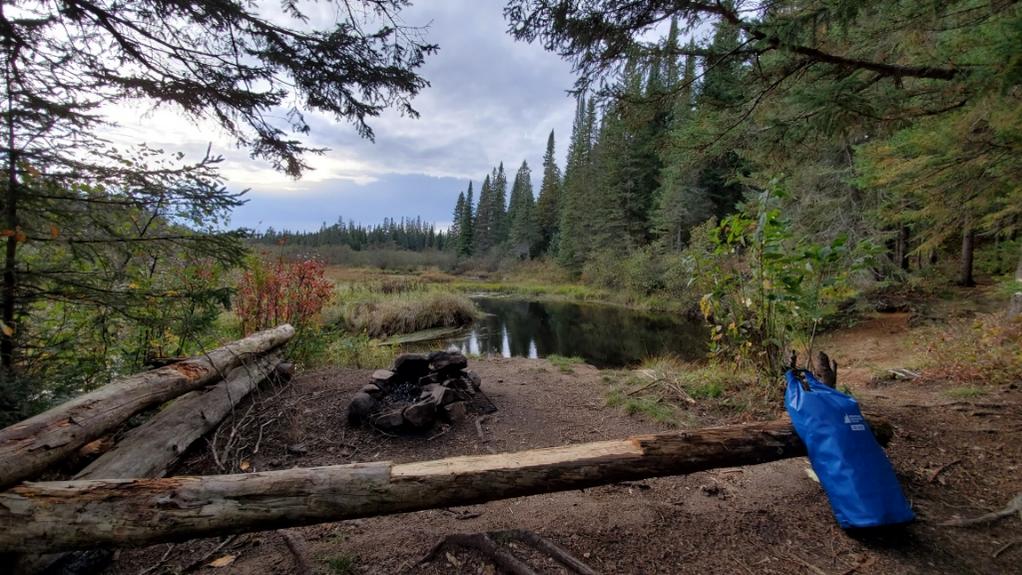 A few benefits of portaging in the fall: No bugs, cool weather, beautiful colors

Finally at my home for the night 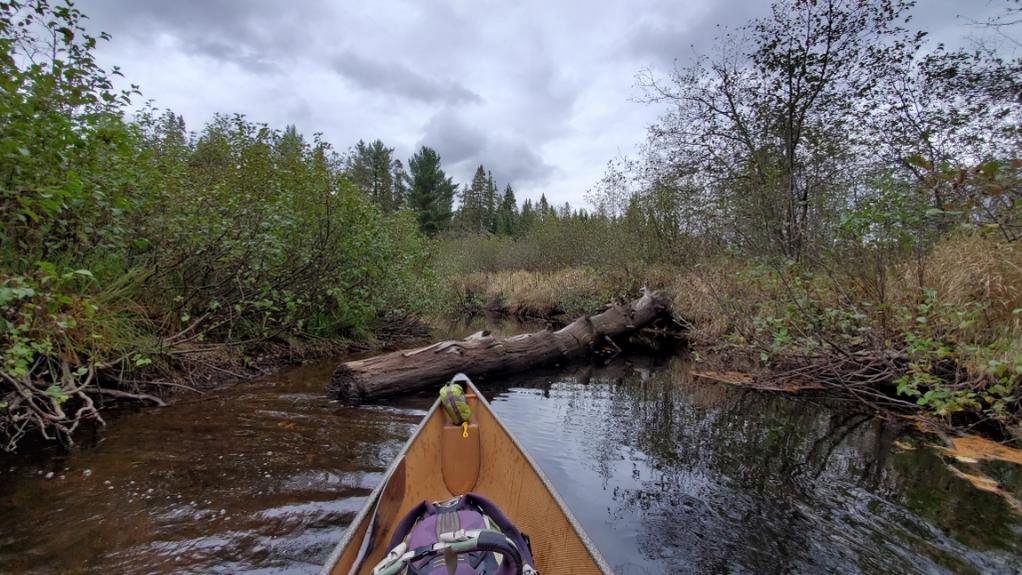 Looking downstream on the Tim River. Happy to see blue skies for my final stretch of the day

The results are in!

After several twists, turns and blockages I finally arrived at my campsite at the Little Trout creek junction. From the water the campsite looked questionable. High up on the riverbank and I couldn’t see much else. My opinion quickly changed as I climbed the bank and realize this site was in a hemlock grove – my favorite type of campsite. I was happy with my choice and began to set up camp. The clouds were back but I didn’t feel a threat of rain, so I skipped the tarp. As I was unpacking, the sun decided to make one more quick appearance before hiding behind the clouds again. I had camp established by 5:30 and made a quick run for firewood. I didn’t want to run out of daylight before having a good stack of wood for the night. 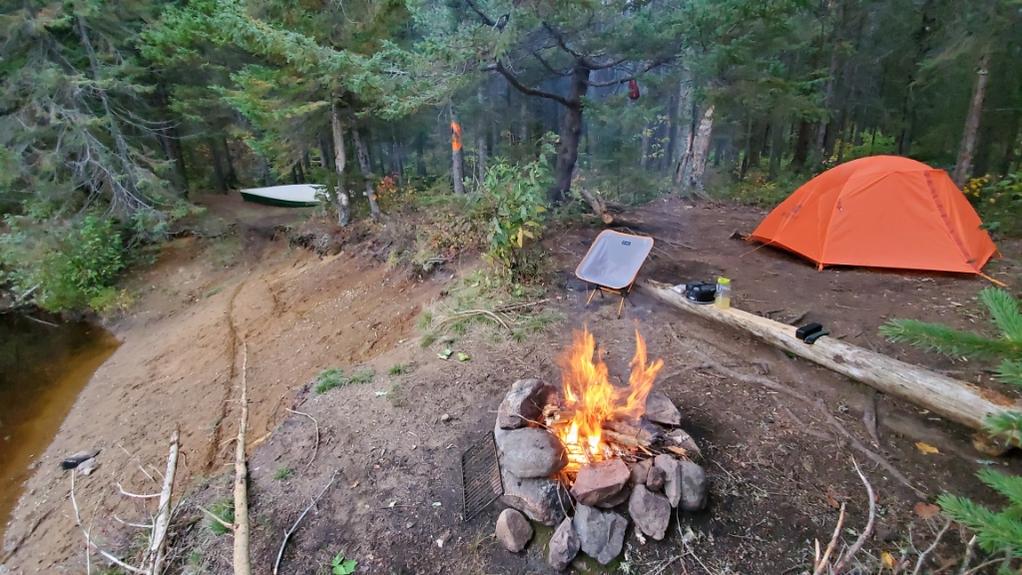 Looking upstream on the Tim River from the P410 put-in 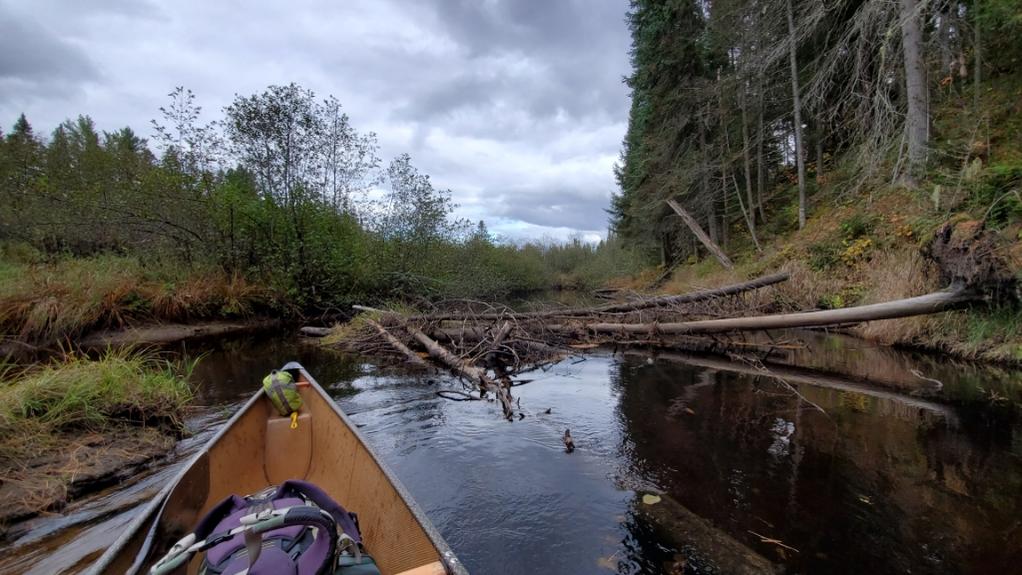 Taking a break at the halfway point. Seeing a canoe rest at the top of a hill is always a welcomed sight 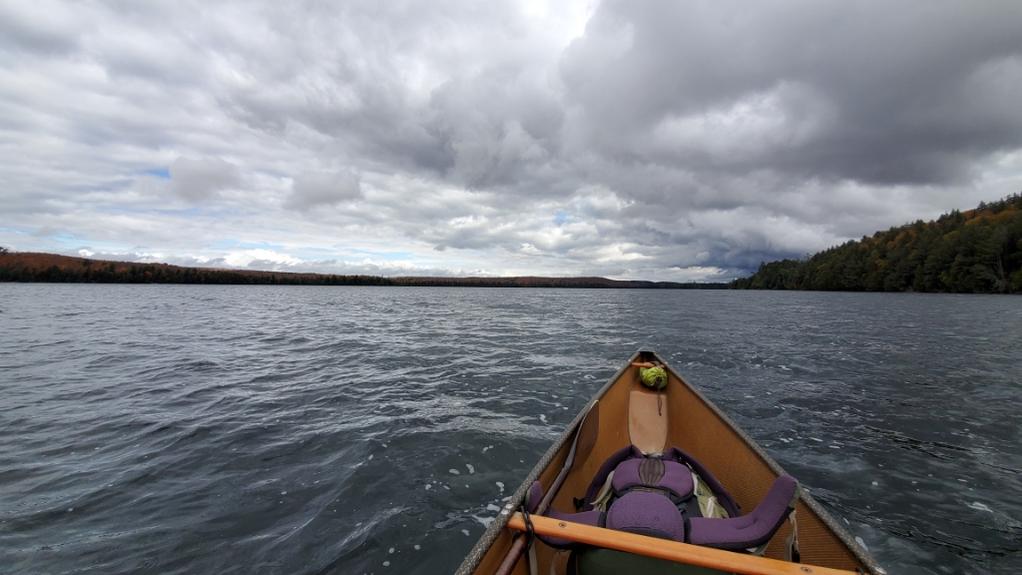 The trail to Hambone Lake was short and sweet, but super muddy. I crossed Hambone’s clear green water then made my way down another muddy trail leading to Ralph Bice Lake. I was doing pretty good for time, it was 1:30pm and I was already half way across Ralph Bice Lake. I was fortunate to have a tail wind pushing me along, but I couldn’t help thinking about how problematic this might be when I’m going the other way in 8 days. But that’s a ‘next week’ problem. Two more muddy portages, one leading to Little Trout Lake and the next to Queer Lake. As I paddled the narrows of Queer Lake, a really creepy vibe came over me. Something about the lighting, the dead trees and the shoreline just seemed off. 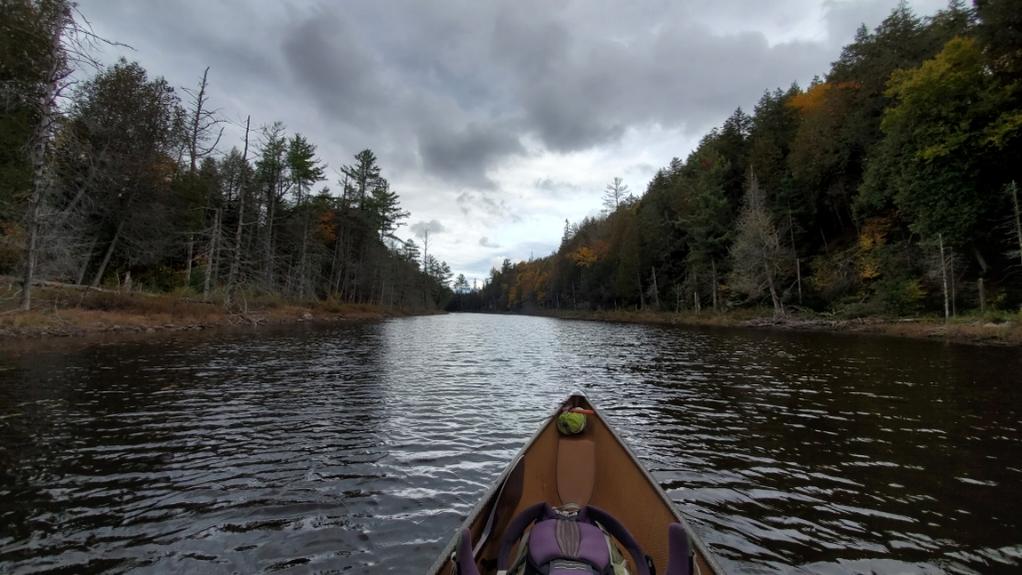 A strange and hazy pink sky 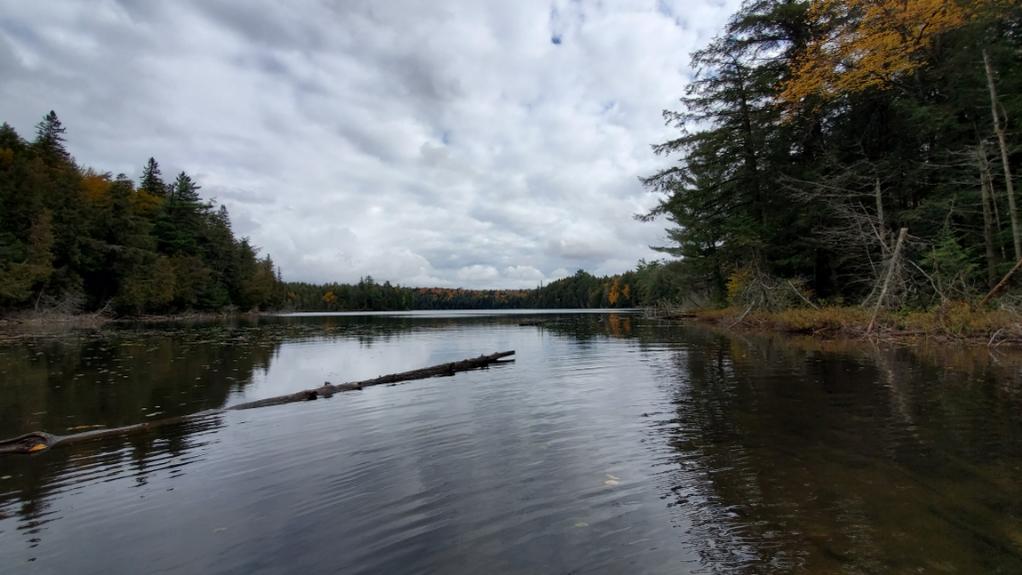 By the time I reached the east shore of Bice, the winds picked up a bit. 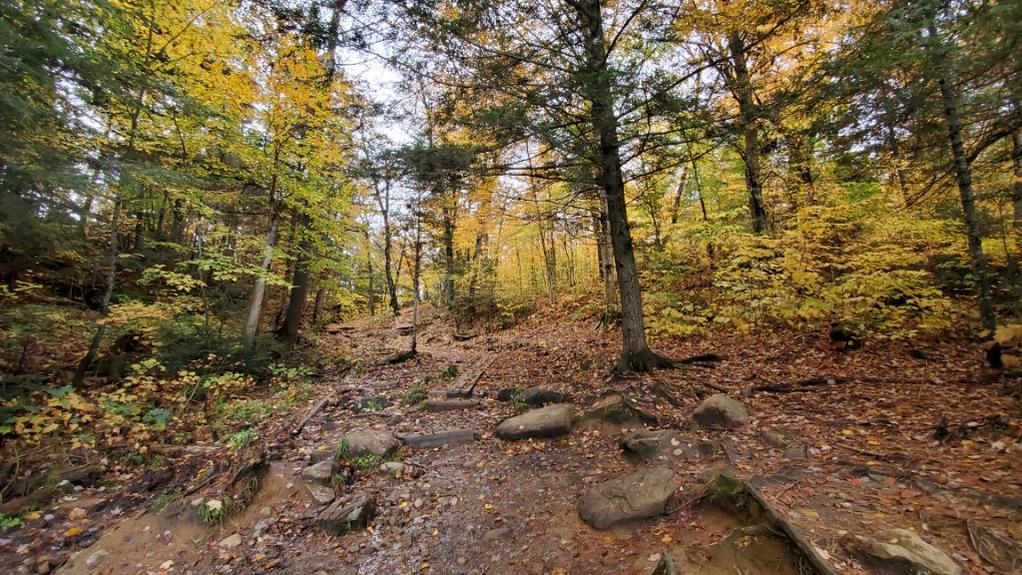 Another tight squeeze - but I made it 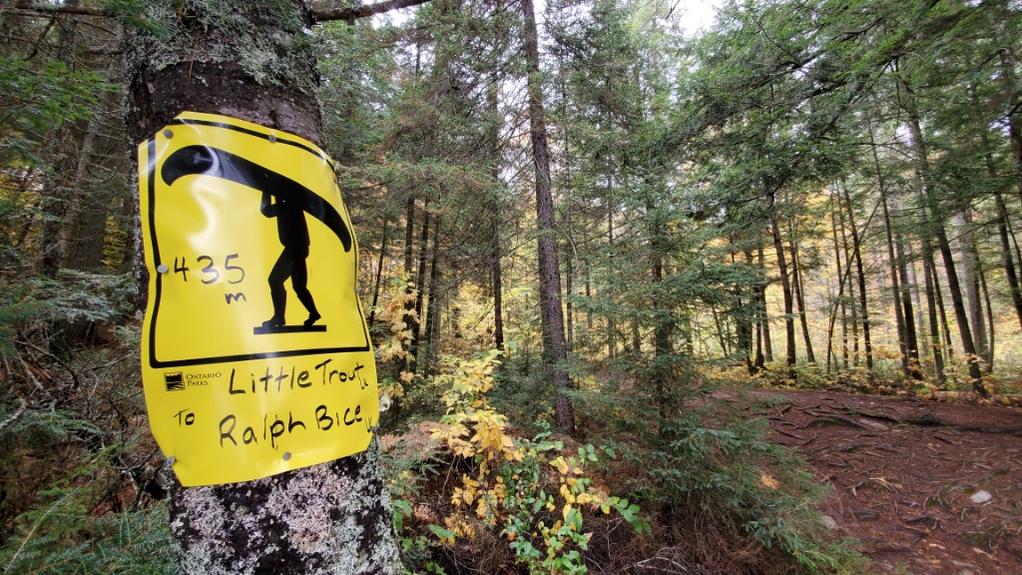 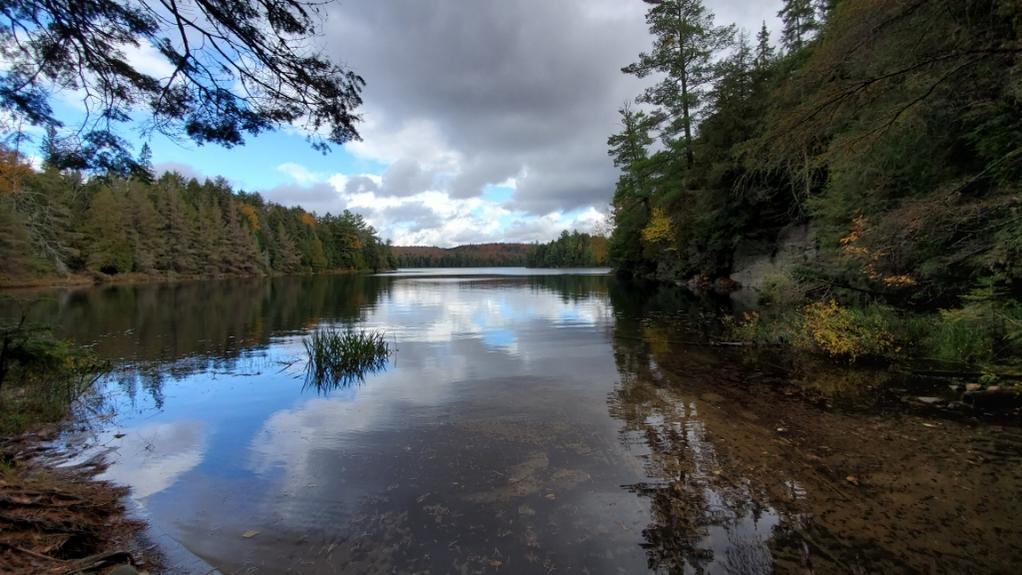 First portage of the trip - P135 to Hambone Lake 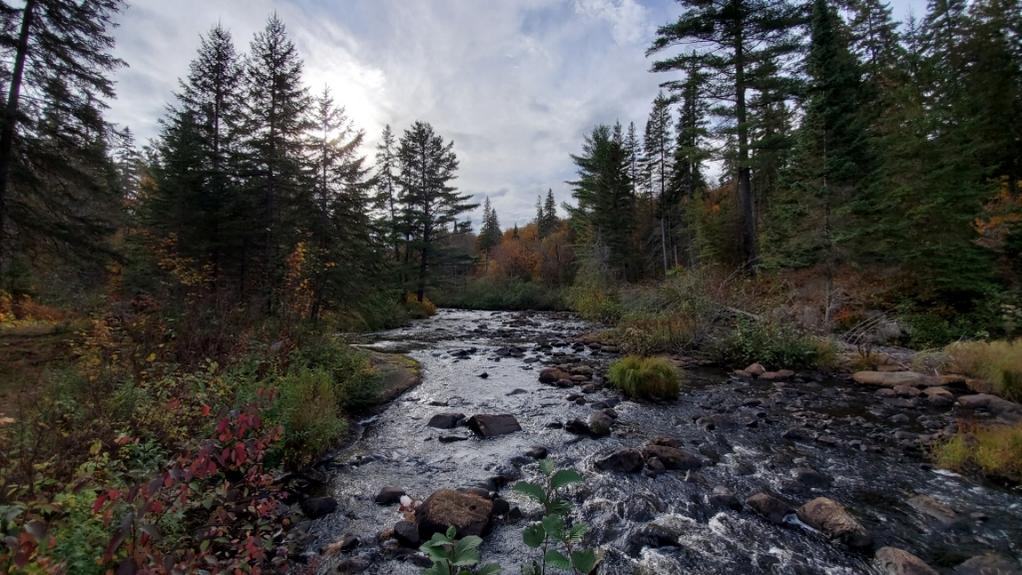 Steak on the grill, veg in the pot & a whiskey sour in the Nalgene 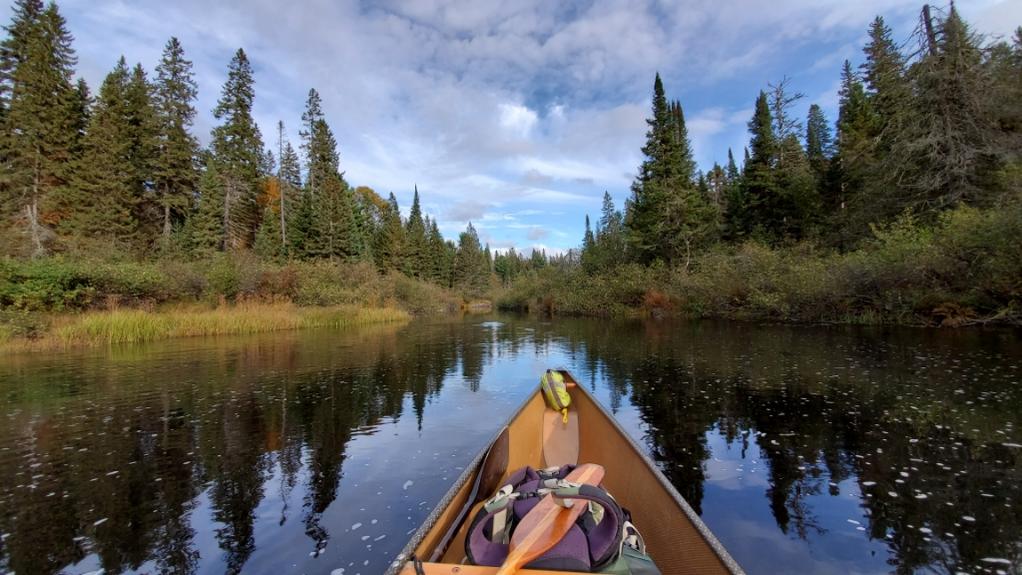 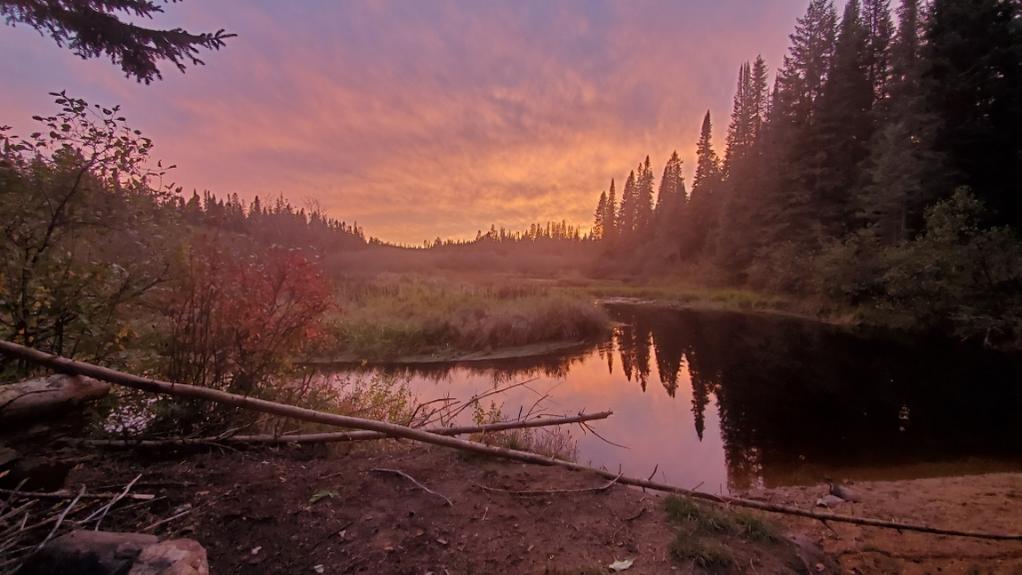 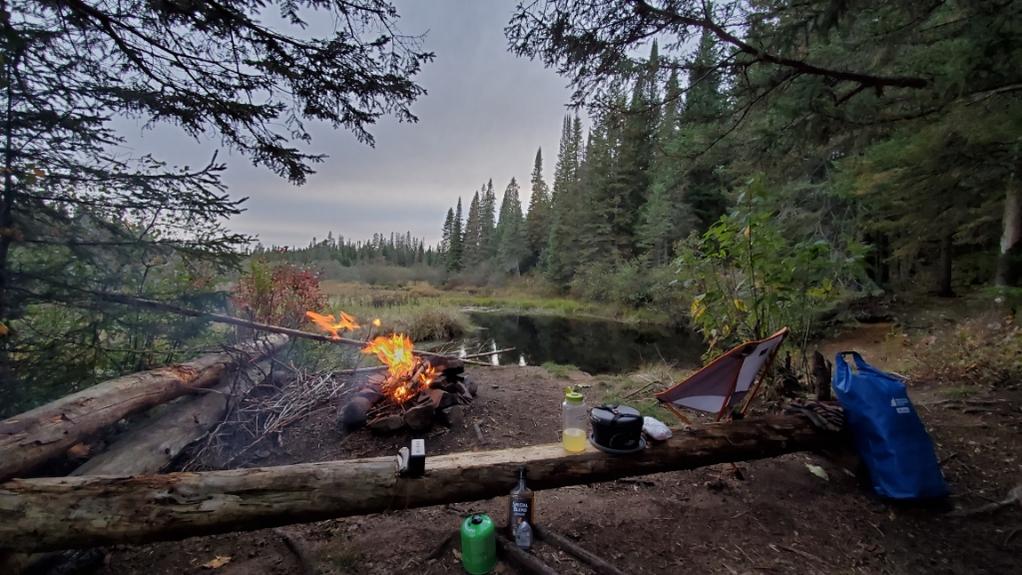 I have to admit, while driving down the logging road to Magnetawan Lake I was a little apprehensive about this trip. It had been a while (4+ years) since I did a true solo trip and I was worried I might be a little rusty.   ​ 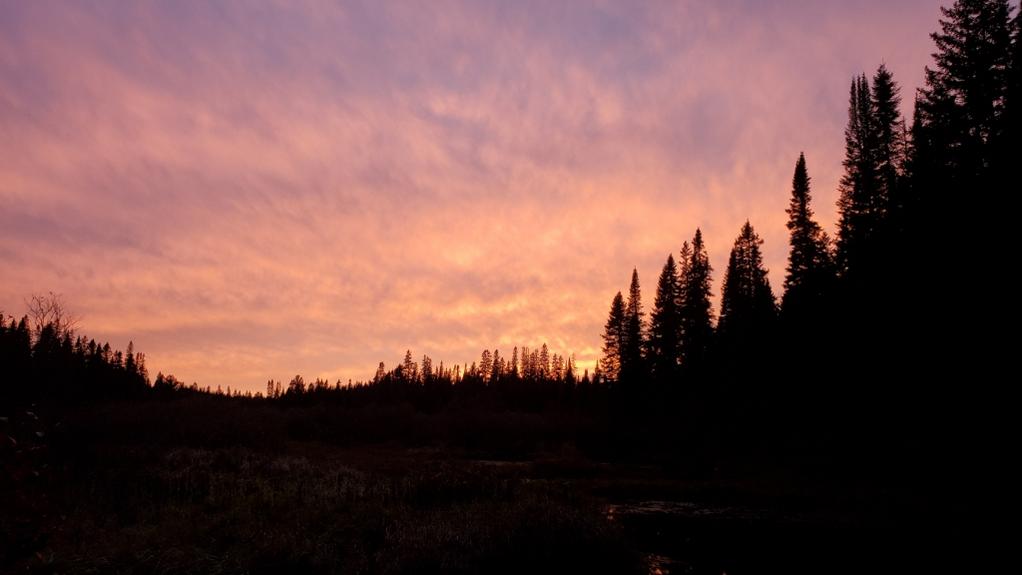 It doesn't get any better than this 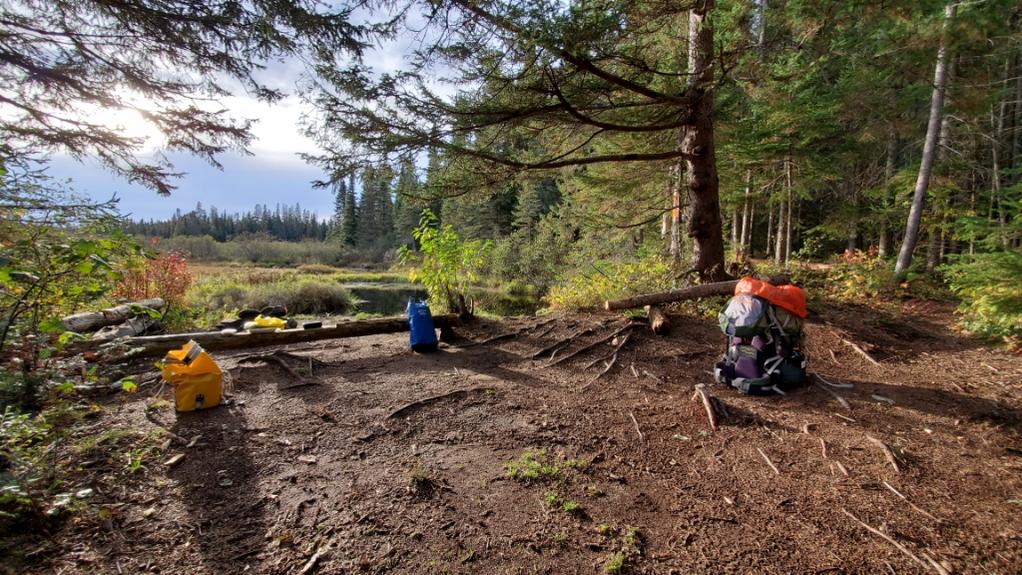 Today's plan: Get to the Tim! 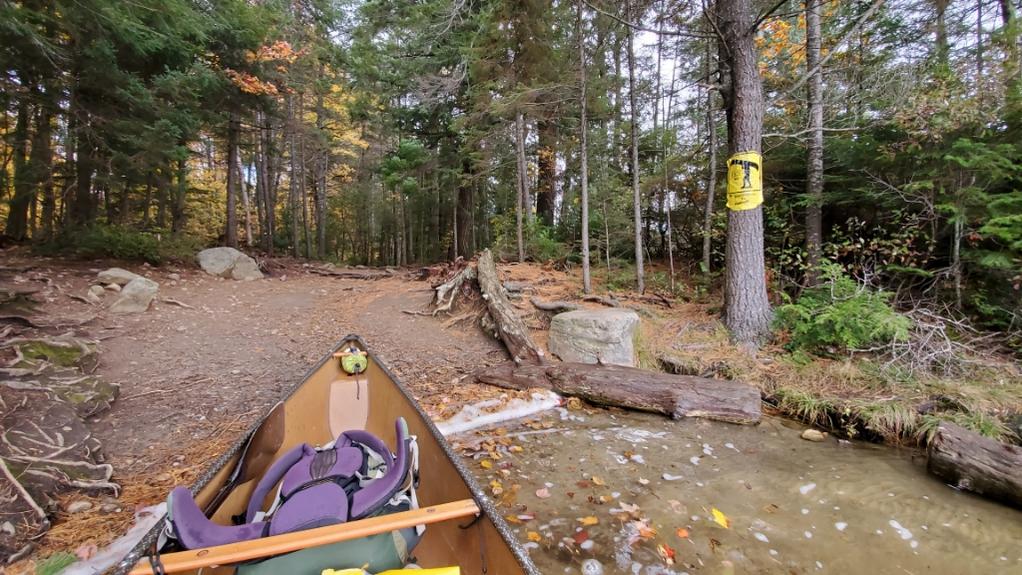 At 3:30pm, I arrived at a portage that I was not looking forward to. I really don’t like to double carry, but I’ll do it for short trails. Unfortunately, I had an 1800m portage to cross before I would be paddling the Tim River. I had a quick lunch (mostly snacks) and started up the trail. I took the first load to the halfway point, and returned for the second. This portage has a lot of ups and downs, and by the time I reached the Tim River, I had walked just over 5km on this trail alone. It had been mostly overcast today, but when I arrived at the river – the sun decided to make an appearance. Its amazing what a little sun can do – I felt energized so I hopped in the boat and continued downstream. I was excited because from here to day 7 was 100% new territory for me – I had no idea what to expect. 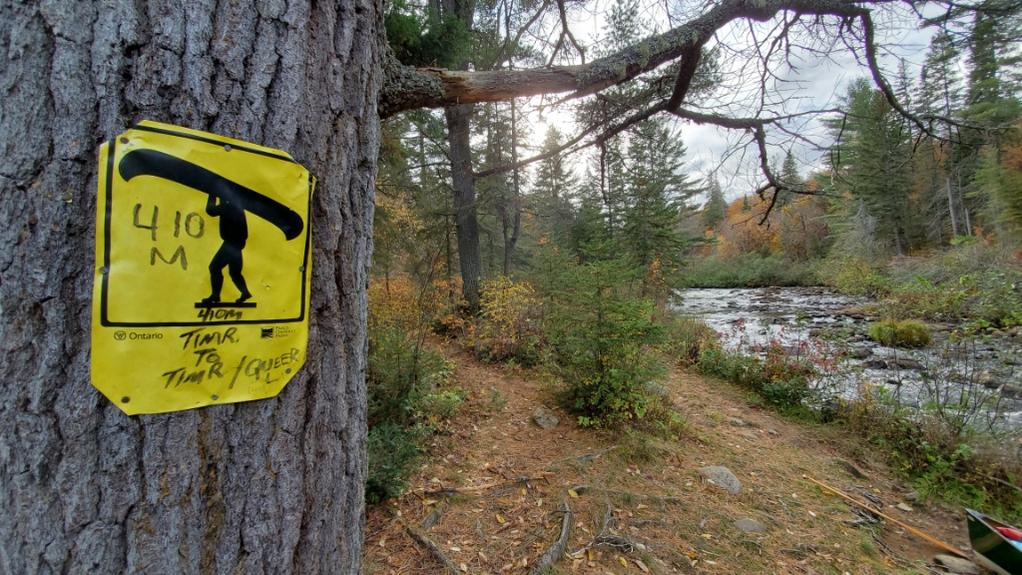 After a LOT of walking, I was finally at the Tim River 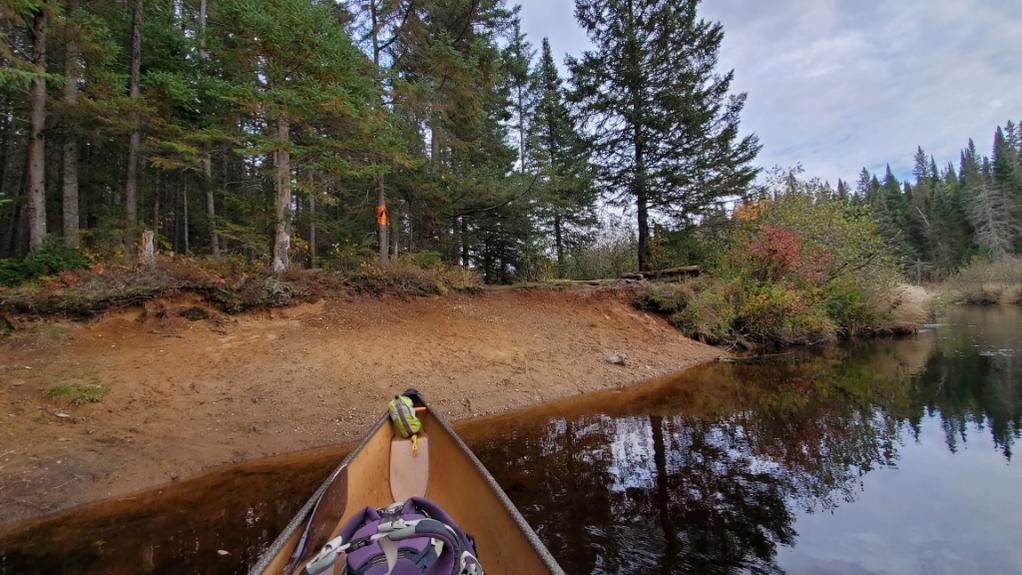 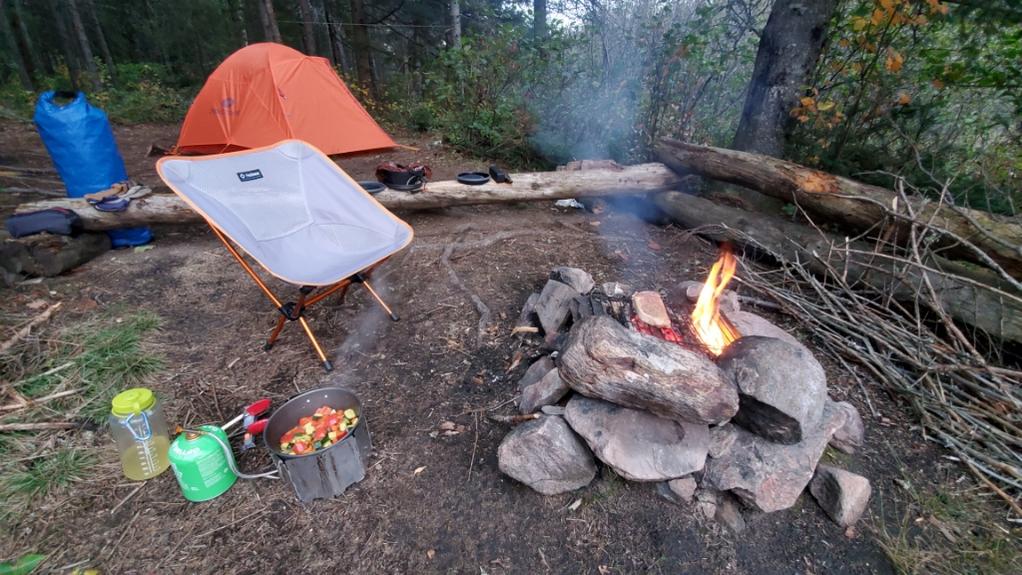