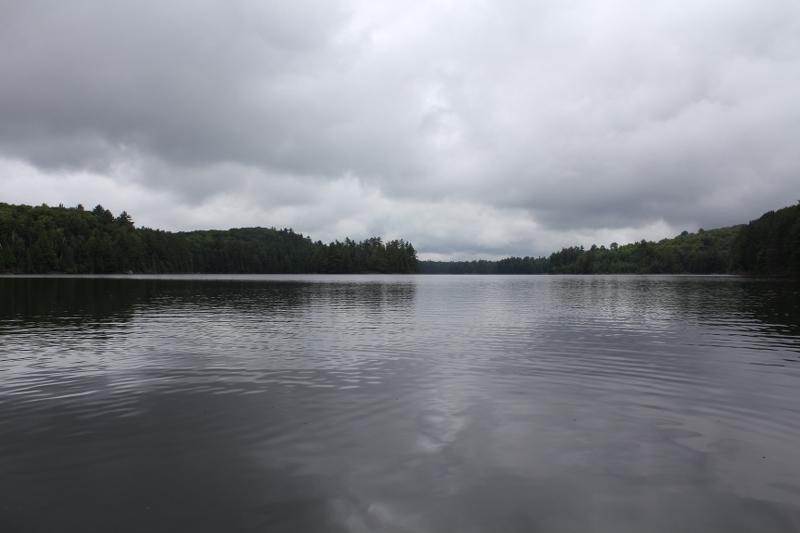 By 9:30am the most threatening clouds had moved on and the rain subsided. I decided to take the canoe over to the first island again to see if I could find a grill for my campsite – I didn’t need one, but I found it odd that such an awesome campsite didn’t already have one. I loaded the canoe with my camera as well as my fishing gear – I figured I could try for a trout dinner tonight instead of the mac & cheese that I had on the schedule.  I got in the boat and made my way to the other island. When I got there I noticed the entire site was heavily over-grown and probably hasn’t been a campsite for quite some time – I was likely wasting my time looking for anything here – there was zero evidence of a campsite so I got back in my boat and moved on. I decided to troll the south shoreline all the way to the Junco Lake portage at the east end of the lake. I didn’t catch anything but I did have a few strikes – I’m sure I would have landed something if I had worms, I should have kept an eye out for them after all the rain last night. I landed at P645 to Junco Lake and walk a small portion of it. It’s a very narrow trail and marked as low-maintenance. I got back in my boat and continued trolling but this time following the north shore to the west. I spied a campsite sign on the north shore so I decided to pull over and investigate. What a crappy campsite – if I was stuck camping here I would just move on to Burntroot or Whiskey Jack – this site flat-out sucked. Over-grown, no benches, terrible water access and no real view. I was really glad to score the awesome site. Once back in the boat I continued trolling the lake for a couple hours and didn’t catch a thing but that’s okay, I had a good time out there. It was around 1:30pm when I got back to the campsite and had a little snack.

The closest thing to a selfie that I'll take 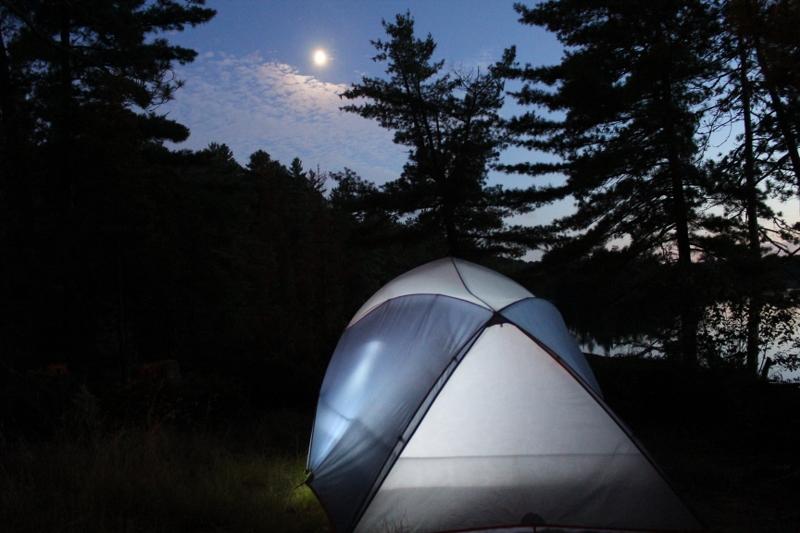 Almost all the clouds have finally lifted

I went back to the upper section of the campsite to make my coffee and enjoy it on the bench. I was looking at the fire pit and because of all the rain it was tempting to have a fire – but without knowing if the ban was called off I’d be taking a stupid chance and opted not to. I have been seeing and hearing between ten and twenty fire patrol planes each day – no joke – never have I heard so much air traffic above Algonquin Park. Hopefully all the rain would have extinguished any existing fires in the bush.

As I enjoyed my second cup of coffee a resident red squirrel decided to hold a protest against my presence. He chattered, squeaked and dropped things nearby to try and scare me off – little did he know, I was in it for the long haul and wouldn’t be budging until tomorrow. I was getting hungry and today for breakfast I had pancakes & syrup. I was actually very hungry as it had been a long time since I last ate anything – not on purpose, I just didn’t expect to spend 16 hours in the tent. I wasted no time scarfing down the pancakes and enjoying my coffee. It was still very cloudy out and shortly after I finished breakfast it started to rain off and on again. I was glad to have the tarp so I just hung out under it simply enjoying my presence in Algonquin Park.

By 7pm my dinner was ready and wouldn’t you know it? The sun was ready to come out too! The clouds lifted and provided me a beautiful evening to enjoy my dinner. I mixed up a whiskey drink and grabbed my pot of mac & cheese then sat down on the rocks to eat. As I ate I starting thinking about how awesome this trip has been so far, the fact that it was day 6 and I still had another 10 days of this awesomeness to go. I ate my dinner in full and still felt a bit hungry, so I poked around the food bag a bit more and decided to make a fresh bannock – something I was going to make anyway if I was lucky enough to catch a trout. As I waited for my bannock to bake I kept the drinks flowing – I had to play catch up for all the booze I didn’t drink last night! Lighten the load – always!

I was awake and ready to start my day at 6:30am – a full 16 hours after entering the tent yesterday. I must have really needed the sleep, but I didn’t feel off or sick so I guess I was just exhausted. It rained all throughout the night and it was very wet outside – I hoped this would be enough to call off the fire ban, as I really wanted to have a campfire! I put the pot on for coffee then sat down on the rocks while the water boiled. It was a clam but damp morning and I loved every second of it. The air smelled of fresh forest from all the rain. Today was a scheduled off day and my only plan was to fish and explore the lake a little bit. 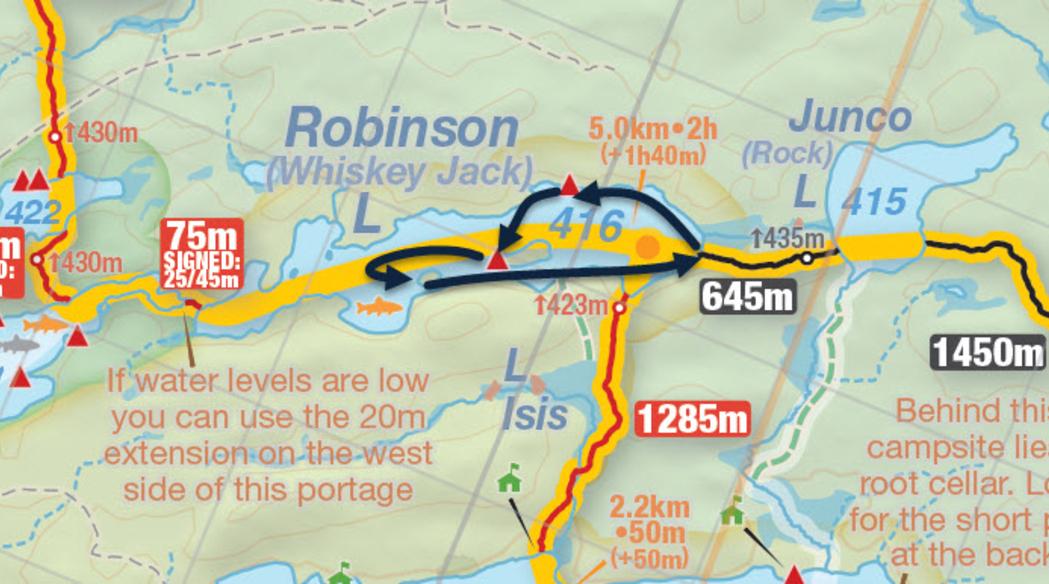 The pine-clad shoreline and crystal clear water of Robinson Lake

Messing around with a flashlight and camera 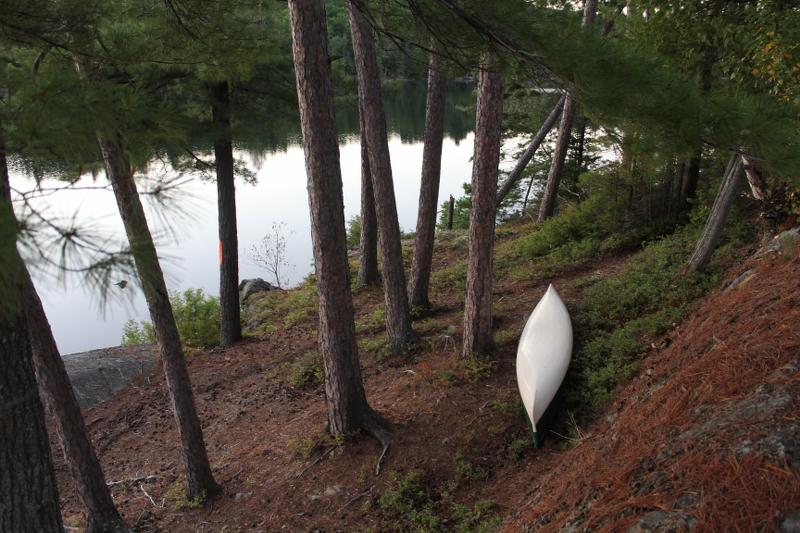 Looking east across Robinson Lake - Paradise Island in the distance 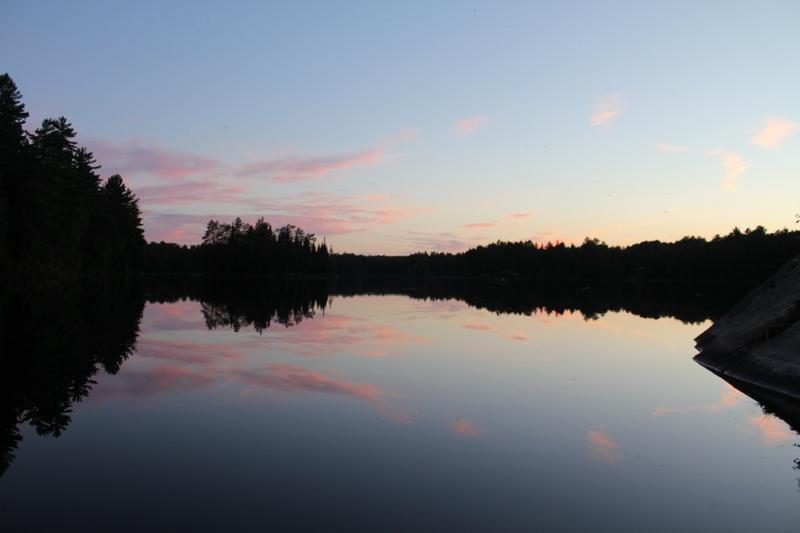 Robinson Lake can be very scenic

It was a beautiful sunset and the full moon was visible while there was still plenty of daylight left. I spent my time walking around the island taking various photos then grabbed one last drink then sat on the rocks until it became dark. Since I couldn’t have a fire, I decided to get in the tent when the mosquitoes came out, but not before snapping a few more nighttime shots. I spent an hour in the tent looking over the map, retracing the route I had already taken and reviewing the route I planned to cover over the next 10 days. It was 10pm when I finally crawled into my sleeping bag and dozed off for the night. 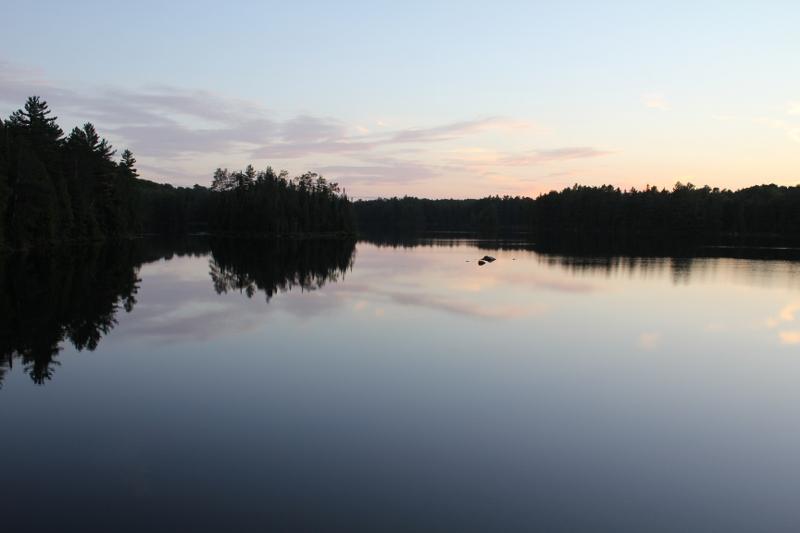 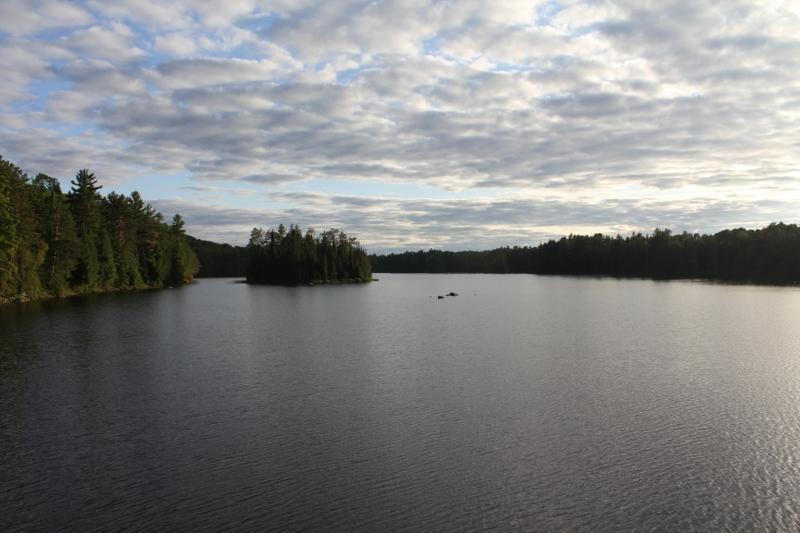 The lower level of Paradise Island 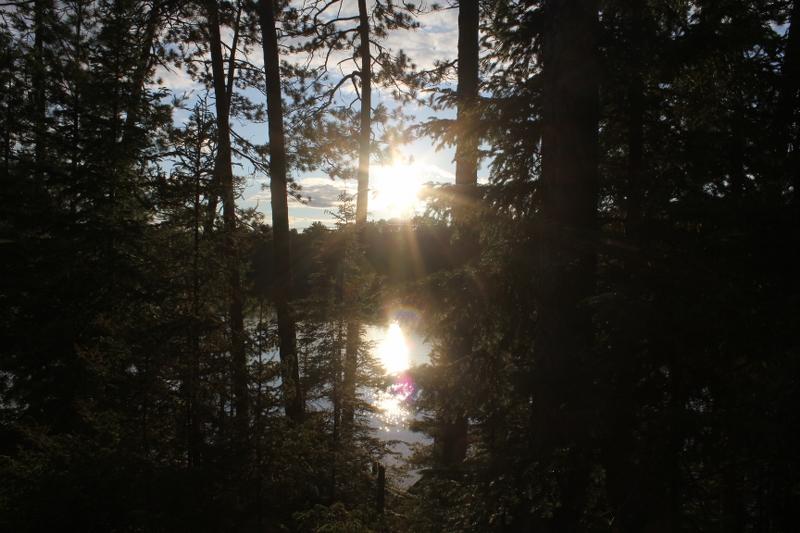 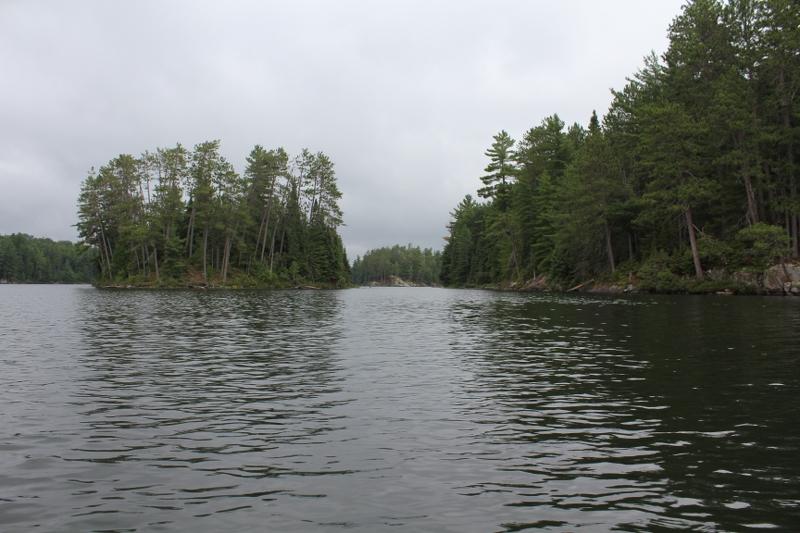 Sun shining through the tree on Paradise Island 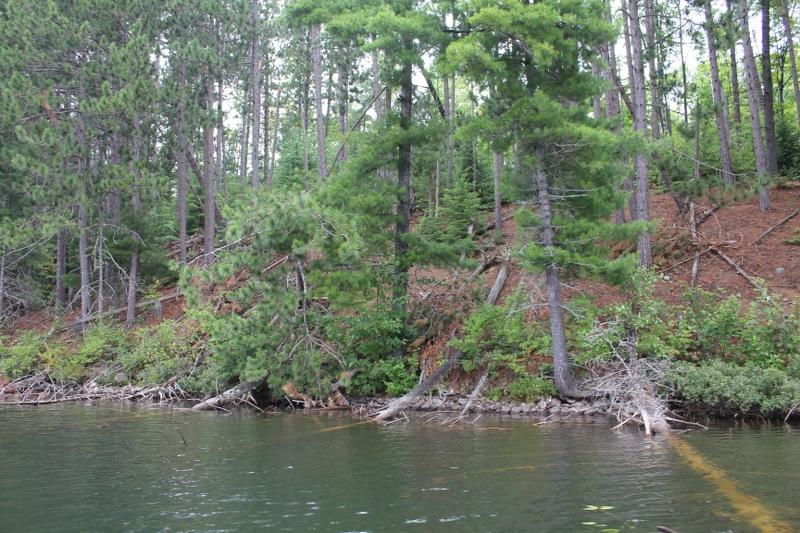 I see two people in a canoe coming from Whiskey Jack Lake - the second group I've seen in six days! 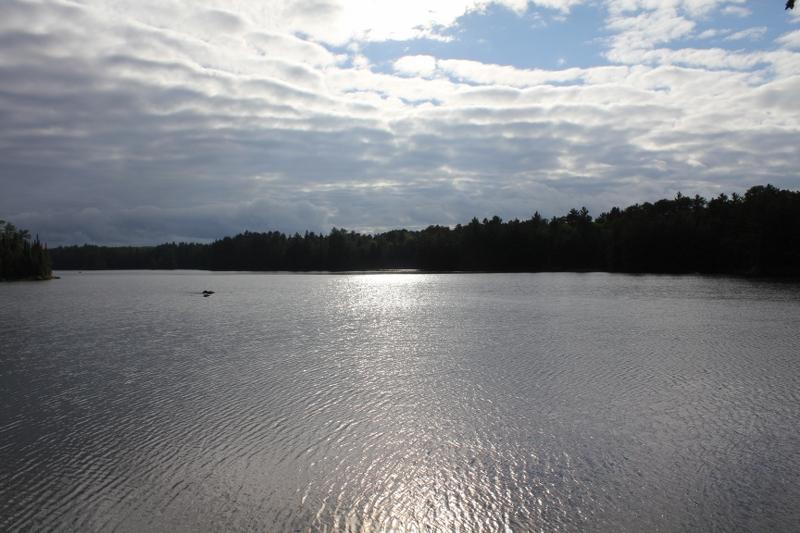 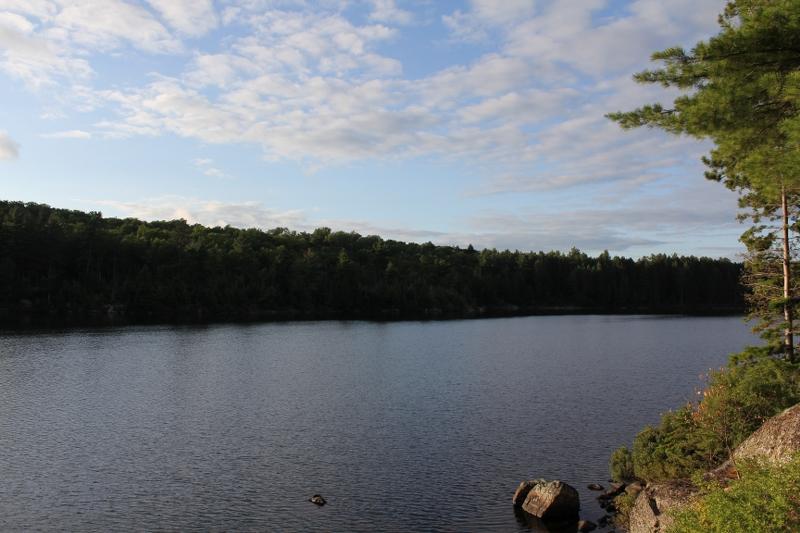 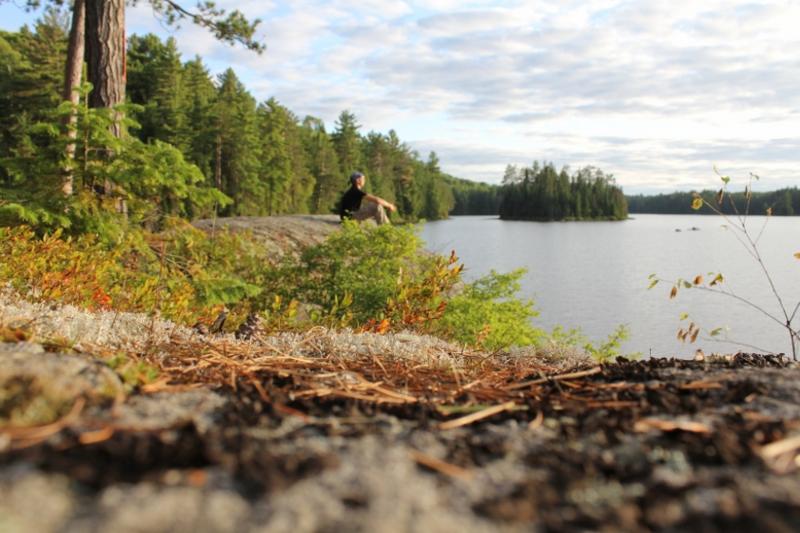 A misty day on Robinson Lake

Looks like it'll be a great end to the day 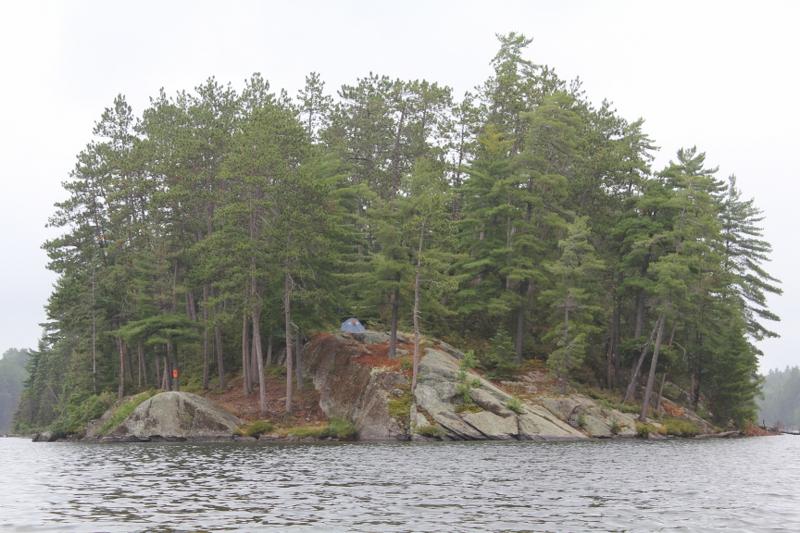 Dead calm Robinson Lake is begging for a paddle 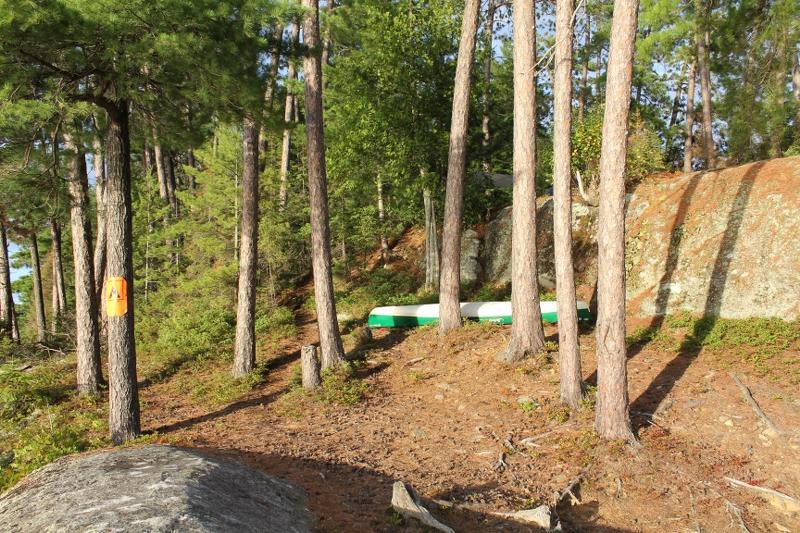 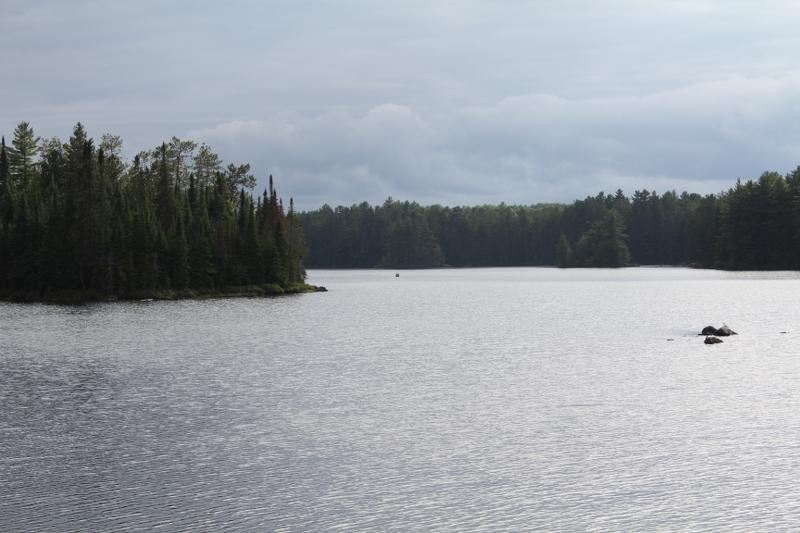 I didn’t have much to do so I figured I would spend an hour or so paying it forward to the next occupants of this amazing campsite. I scoured the island for a bunch of firewood and made a really decent pile – which was impressive considering the size of this island, they’re usually picked clean when this small. It was still cloudy out and I was once again feeling a little tired. I decided to take another nap but not before setting my alarm for 6pm as to not waste my night again. Around 4pm I got back in the tent and slept till six – perhaps I was fighting off a bug because I seemed to really need extra sleep over the last two days. When my alarm went off at 6pm I immediately jumped out of bed – I didn’t want to laze around an accidentally falls asleep again. I got out and it was still cloudy. I figured I should get dinner started so I went down to the lake and filled my pot with water. Seeing how I didn’t catch any fish my dinner tonight would be KD Mac & Cheese. Not as good as lake trout but it would do the job. As I waited for the water to boil, I spied a canoe coming across the lake from the Whiskey Jack portage – the second group of people I’ve seen in six days!