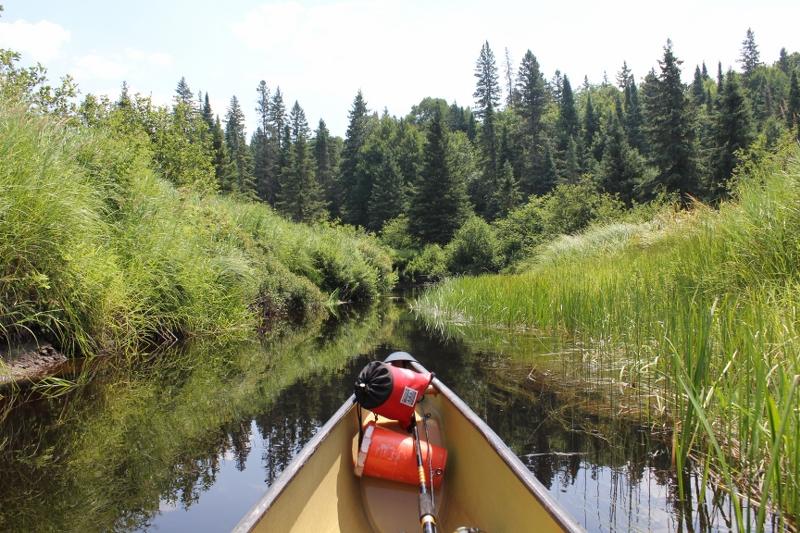 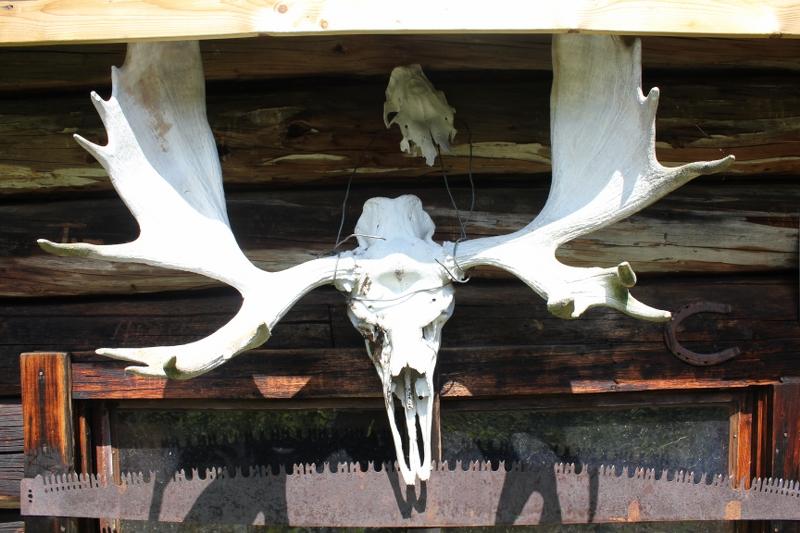 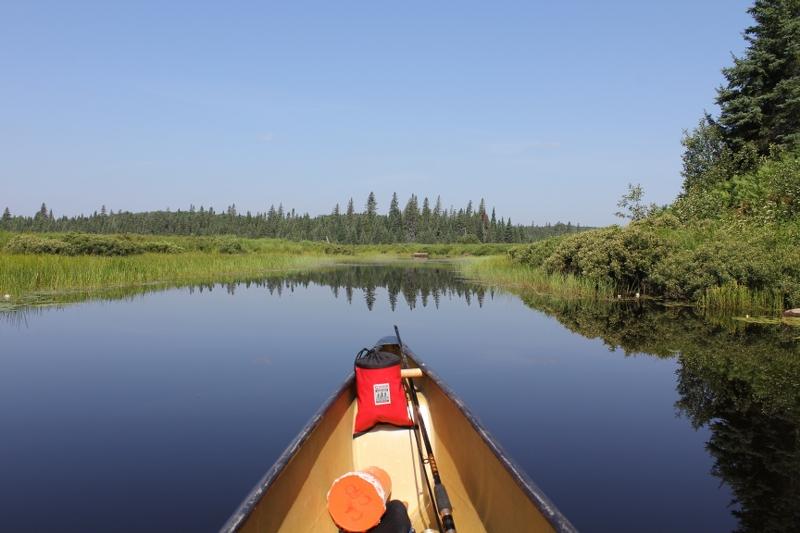 A look up river from out front of the Highview Cabin

Continue through the grass - can't see much around here but better than alders! 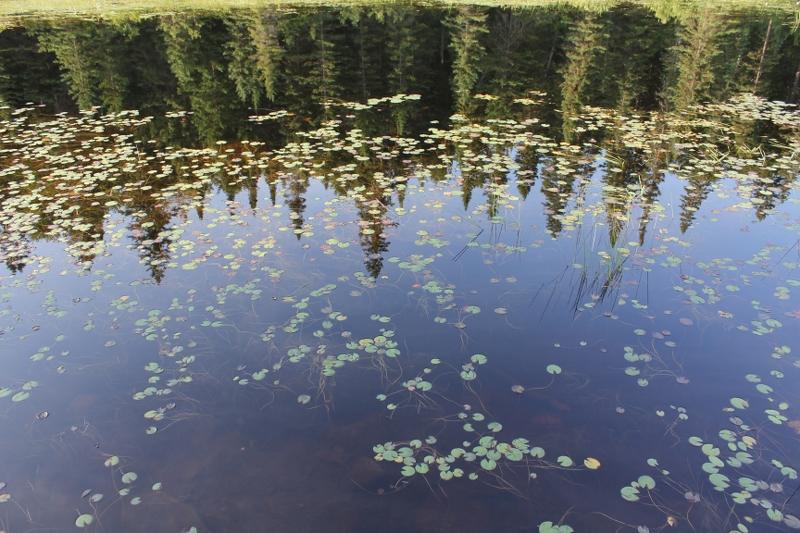 Grassy section of the Nipissing River in Wolfland Creek Marsh 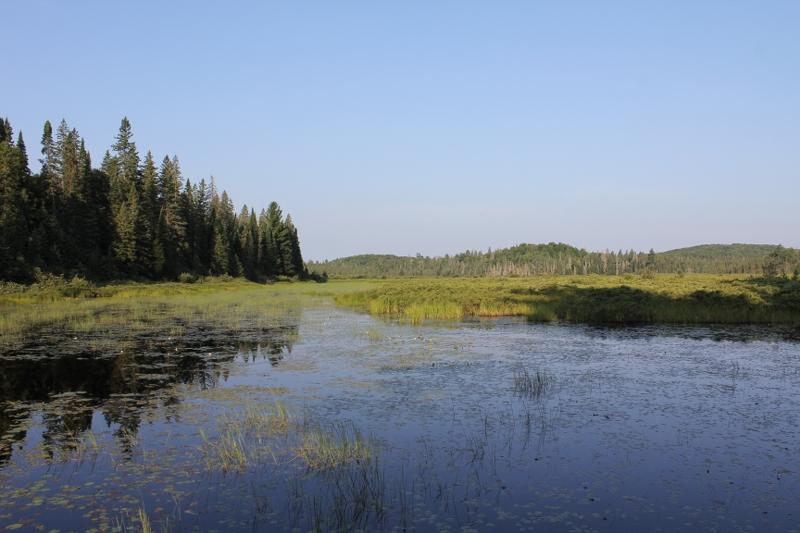 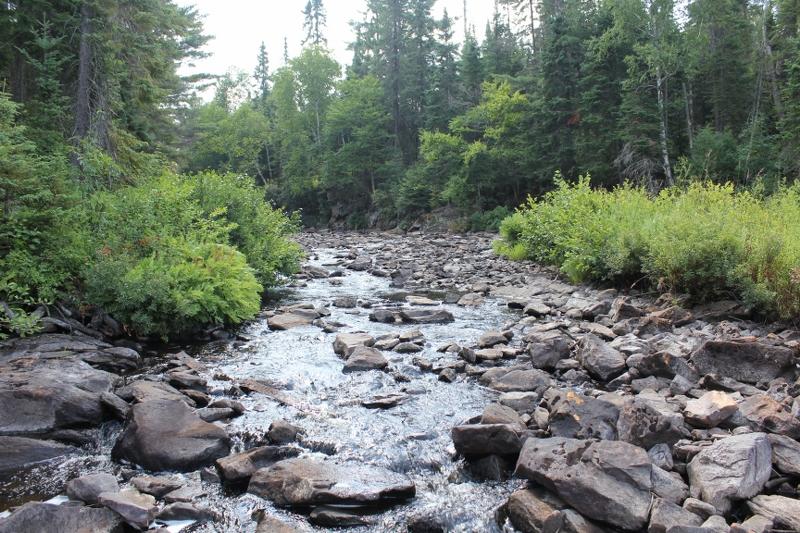 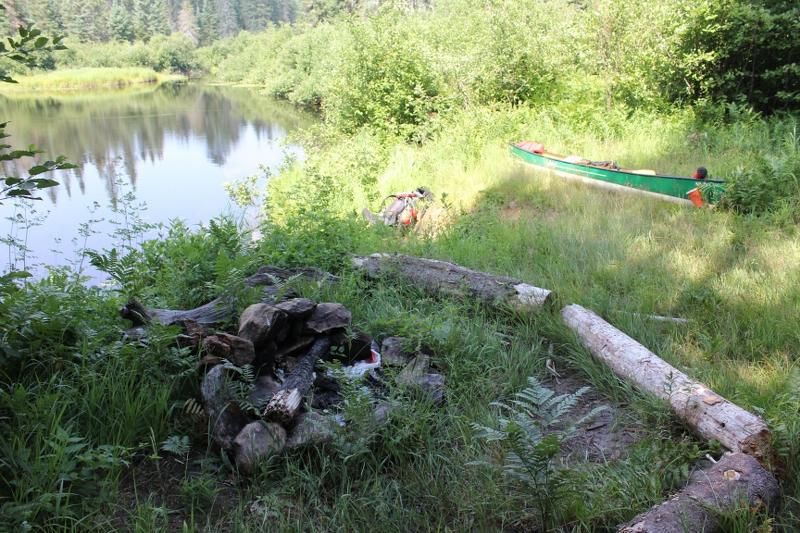 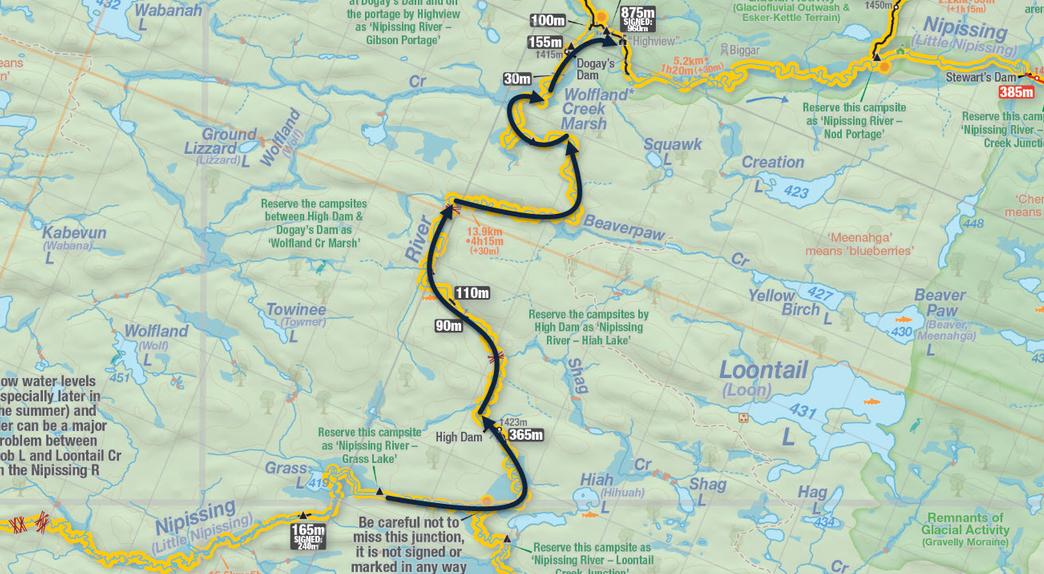 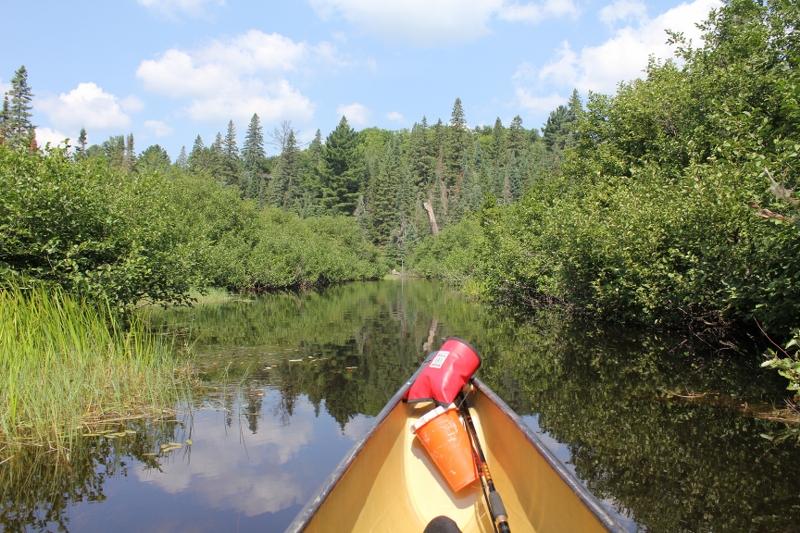 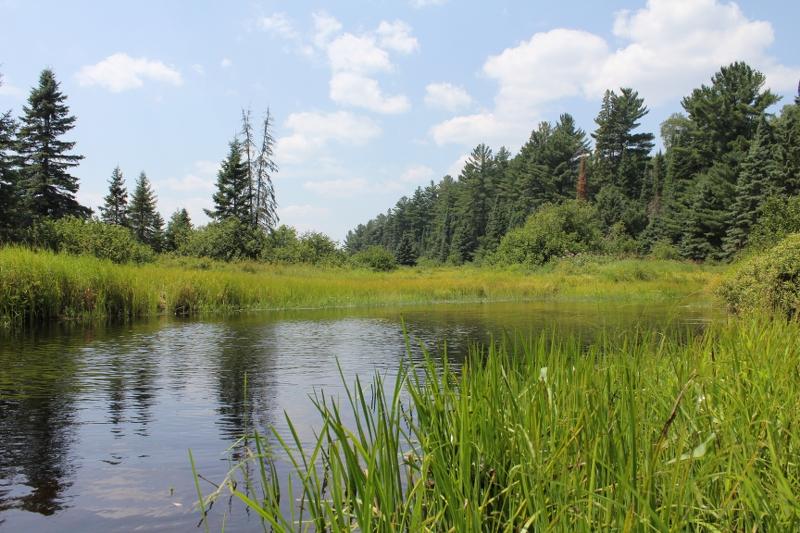 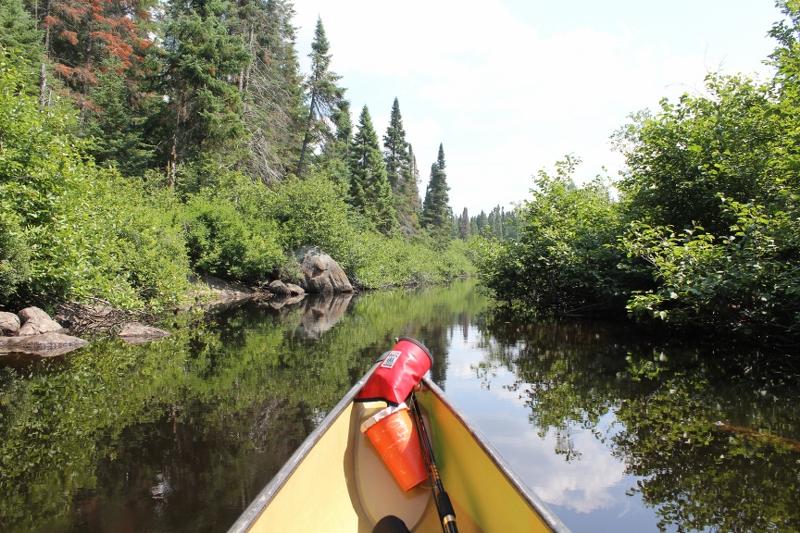 Just when you think you'll have to exit the boat, a small passage reveals itself

The floor was still wet and I was feeling very sweaty and stinky from the last two days of travelling in hot weather so I unpacked my personal supplies and opted to take a quick shower. Since this cabin was right on the portage, there is always a chance that someone could walk by at any minute – but I didn’t see anyone yesterday or today so I took my chances. I grabbed some water in my collapsible bucket and brought it up beside the cabin to wash up. I stripped and made quick work of the shower – constantly checking for anyone coming down the trail. With my shower over I felt absolutely amazing – completely cooled off, refreshed and most importantly no longer sticky from a combination of bug spray and sweat. I put on fresh clothes and started unpacking the rest of my gear in the cabin. 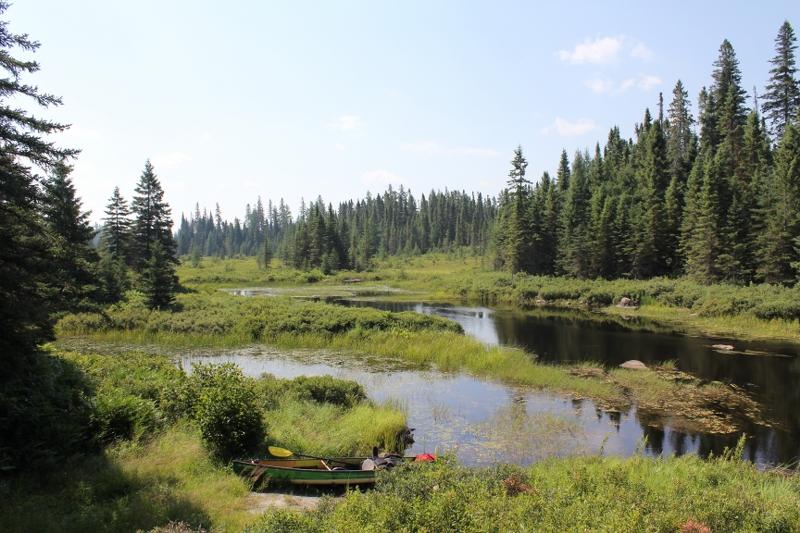 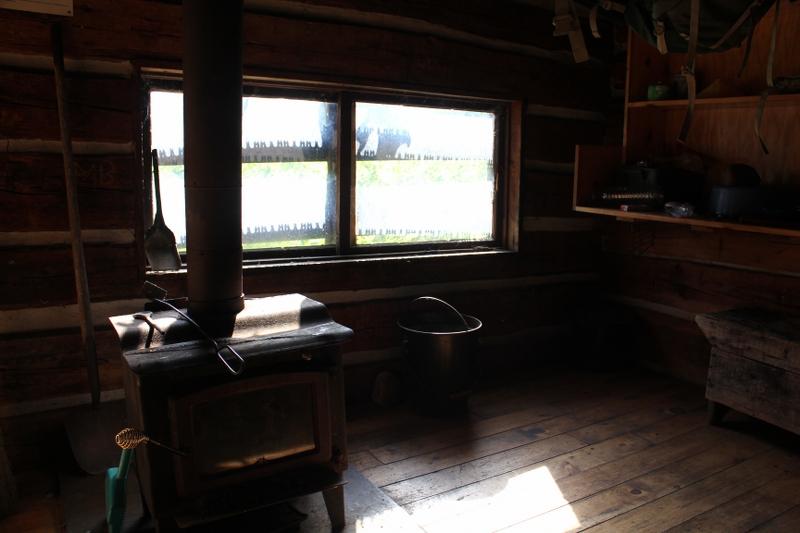 The Nipissing River at High Dam

A lovely paddle down the Nipissing River

Another beautiful day in Algonquin Park!

Following dinner, I did the usual clean up and decided to go gather some wood for the wood stove as this was my only chance at anything close to a fire on this trip. I was glad to be able to have something sort of like a campfire for the next 3 days. I gathered a good amount of wood just in case it became cool in the morning and I needed to warm up the place. It was getting dark outside and by 9pm I lit a small fire in the stove. I left the cabin door open to get what little bit of light and sound was left outside then mixed another rye & ginger to enjoy by my fire. I sat there feeding small sticks into the stove for a good hour and a half before I decided to call it and night. I secured all my food and hung it on a metal wire in the cabin then was off to bed.

The Nipissing River between High Dam and P90

I slept in a bit today and I didn’t get out of the tent until 7:30am. I looked up and I was more than happy to see a bight blue sky and not a cloud in sight – it was a beautiful day! I fired up the stove to get some coffee going and snapped a few photos while the water boiled. I was really excited to get moving today because I was headed to the Highview Cabin for the next two nights and the cabin is one of the highlights of the trip. I made coffee and retrieved my food bag & rope. Breakfast today was bacon & cheese on English muffins. Its kind of like a breakfast sandwich from Tim’s, just no egg. They’re quick to make and though I usually do it all over a fire, I managed to complete the task with the stove just fine. With a second cup of coffee I grabbed my sandwiches and sat down by the reeds, listening to the morning calls of many birds. I must have been hungry because I felt like I ate those sandwiches in just a few bites. It was a pretty hard day yesterday but today I am much more rested. I began the task of breaking camp and getting packed up. By 10am I was ready to start my travelling day. 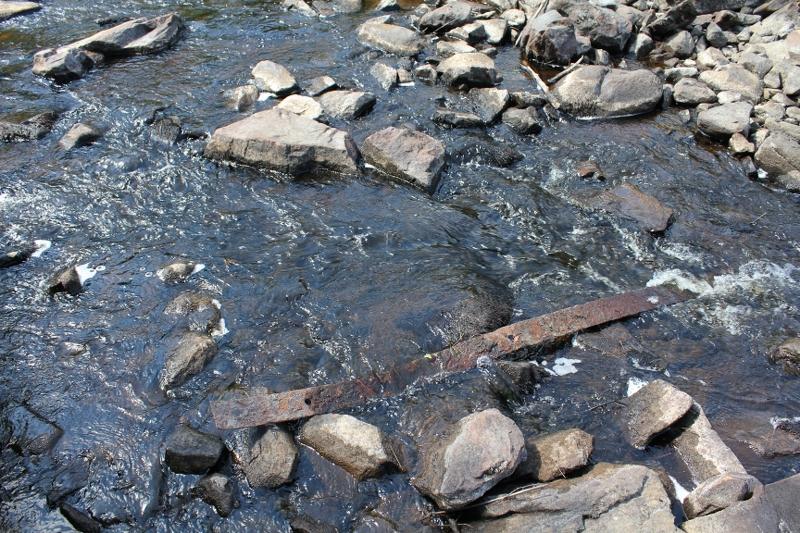 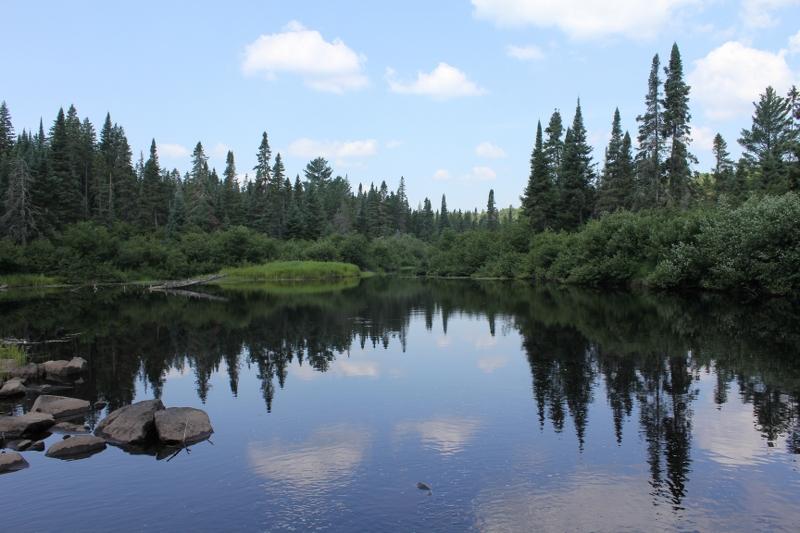 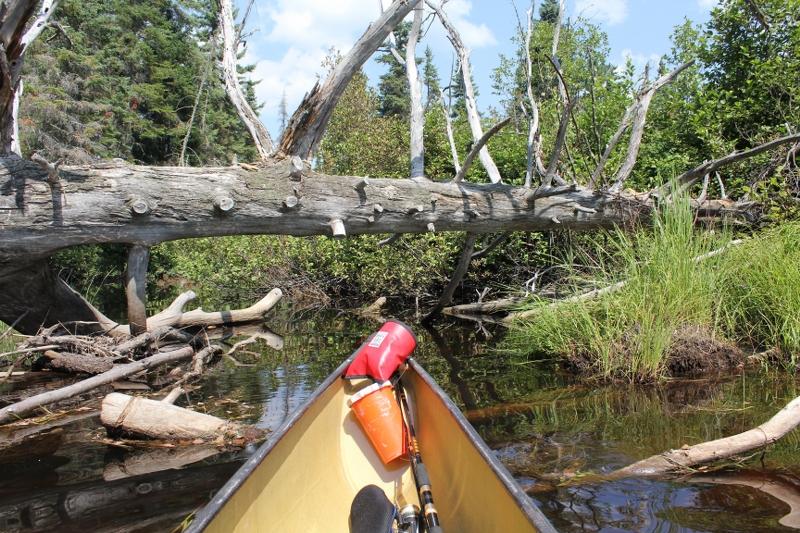 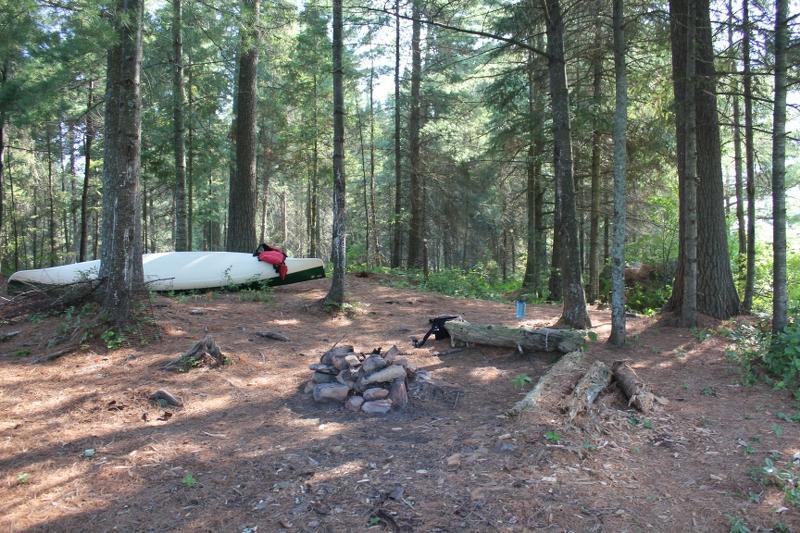 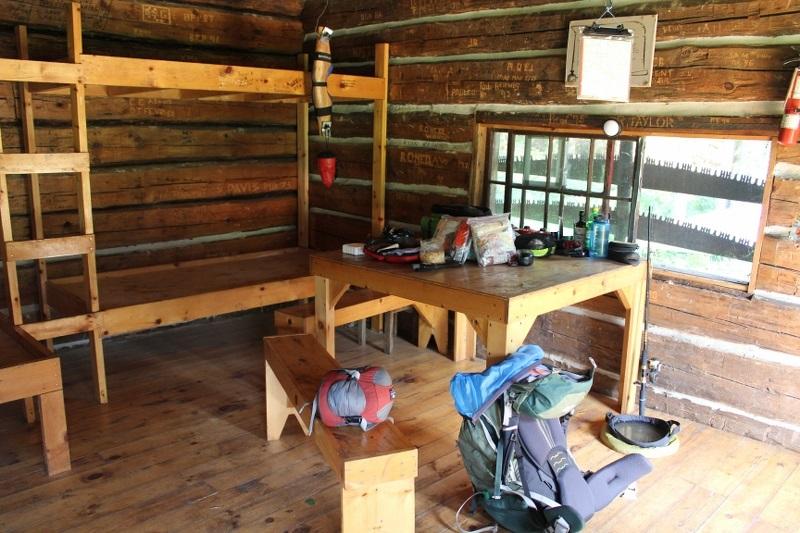 I'm home for the next three days - The Highview Cabin 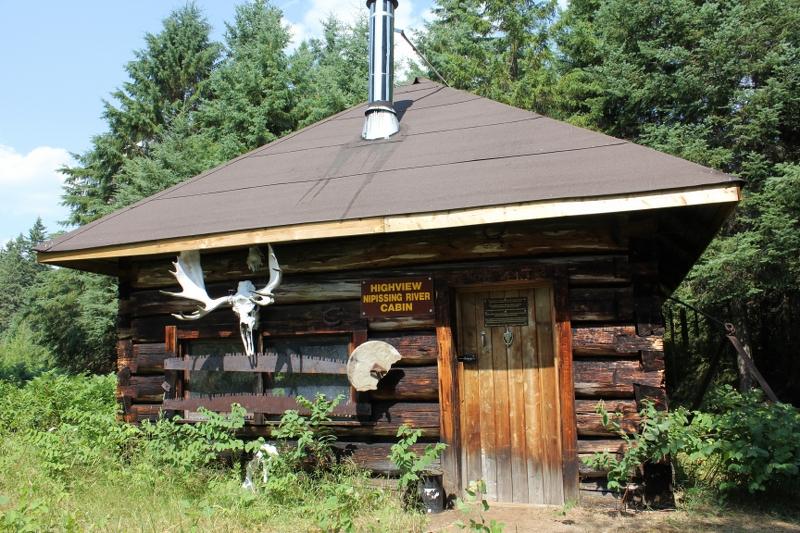 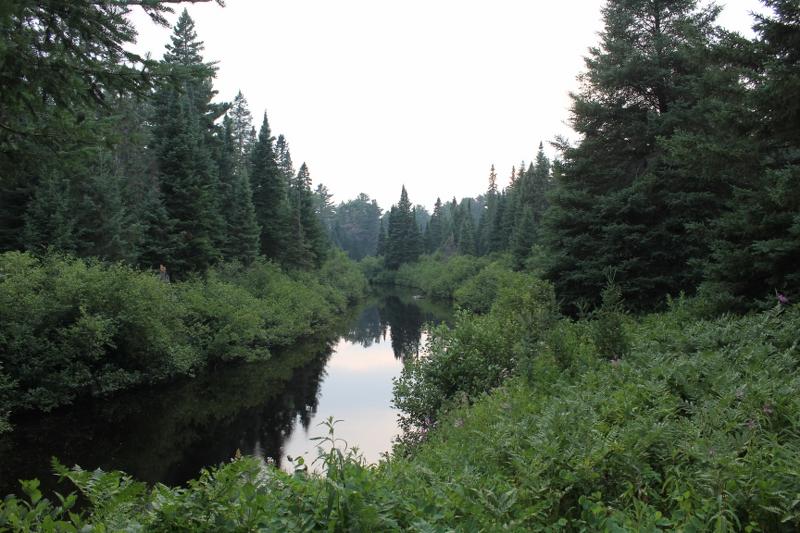 The cabin looked to be in decent shape though there were a couple of items (a shoe, shirt) outside on the property. I figured since I would be staying here for 3 days I might as well give it a good cleaning before settling in. The cabin has 4 bunks and the lower-left bunk is double wide so this was my chosen bed. I gave the entire cabin – including the bunks, tables and benches – a good sweep then went outside for a bit as the dust settled. I didn’t feel like breathing mouse poop particles, that stuff messes with your brain. While the dust settled, I grabbed a bucket and the mop then went down to the river to rinse them out and get clean water. I put a bit of my camp suds in the mop bucket and gave the cabin a desperately needed mopping. I thought it was funny that I was doing housework in the middle of the forest but I had no problem with it, I wanted the cabin to be clean and liveable. The floor came surprisingly clean considering its age and there was a small whiff of campsuds in the air. I went behind the cabin a few dozen meters and dumped the soapy mop water. The cabin was ready for occupancy! 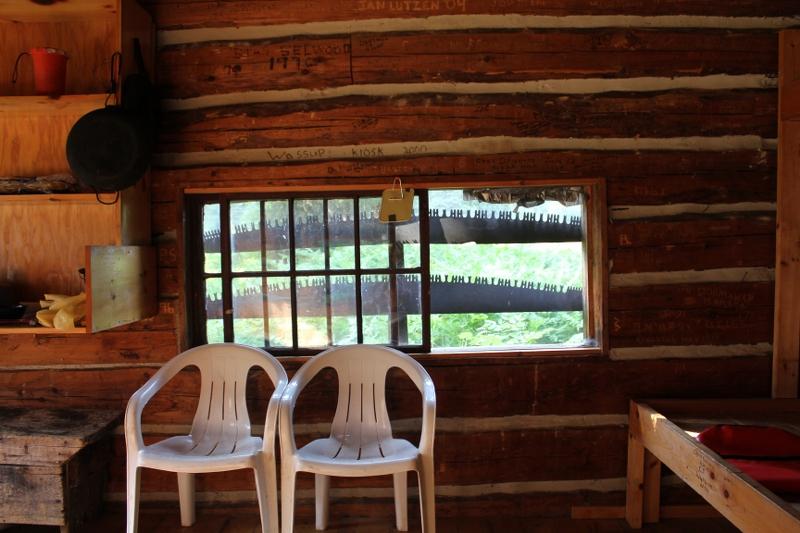 I shoved off from the campsite and looked forward to continuing down the Nipissing. The river was much more wide here and posed absolutely no problem. It was becoming very warm out and there were still no clouds in the sky. After 20 minutes or so I arrived at the Loontail Creek junction. There is a warning on the map about how it could be easy to miss and I agree, if you weren’t paying close attention you could very easily paddle right by. I was once again hoping to see some wildlife as the river looked very moose-friendly. It took me about an hour of relaxing paddling to reach the first portage – a 365m trail around High Dam. The approach to the trail was a bit rough as it was littered with underwater boulders. When I landed at the trail I stopped to take a few photos because there was evidence of the dam scattered about – nothing of major significance, but scrap iron and wood that was clearly used in the structure. I crossed my first of six portages of the day and relaunched down the Nipissing. The bugs were out but they weren’t unmanageable. The deer flies were much more prominent than the mosquitoes. Roughly a half hour after High Dam I came across a massive white pine blocking the river – the map indicated a lift-over but sheesh – there’s no way you could life over this thing. As I approached the tree, I could see a narrow pathway that someone had cut under it. I wasn’t sure if I would fit but as soon as I approached it became clear that this was the only way through without getting out of the boat. I made quick work of it, trying to avoid giant spiders falling off the tree and into my face (I hate spiders). With the lift-over behind me I reached the next two portages, a 90m & 110m, and crossed them quickly. If the water levels weren’t so low I probably could have lined them both, but doing it now would just damage the boat.

There weren’t many beaver dams and despite a few lift-overs being marked on the map, I only had to exit the boat for portages – no obstructions. It was 2pm when I reached the 30m trail around a small rapid and I was able to paddle right by – avoiding the portage entirely. As I approached the next trail – a 155m portage around another little swift, I did the same thing and just paddled by. I scraped a couple rocks on this one but nothing too severe – it was nice to be able to skip two portages, even if they were both very short. In less than a minute I reached my final portage of the day – a 975m trail but the cabin is only about 500m down so I didn’t have to walk the whole thing – not today at least. I made quick work of the last portage and the entire time I walked it I couldn’t wait to see the Highview Cabin. I took about 7 or 8 minutes but felt like an hour just due to the anticipation. Eventually I arrived at a large clearing and the cabin’s roof came into view. I was finally here! My home for the next two nights was this amazing little cabin that was pushing 90 years old.

I'm genuinely curious - how old could this skull and rack be? 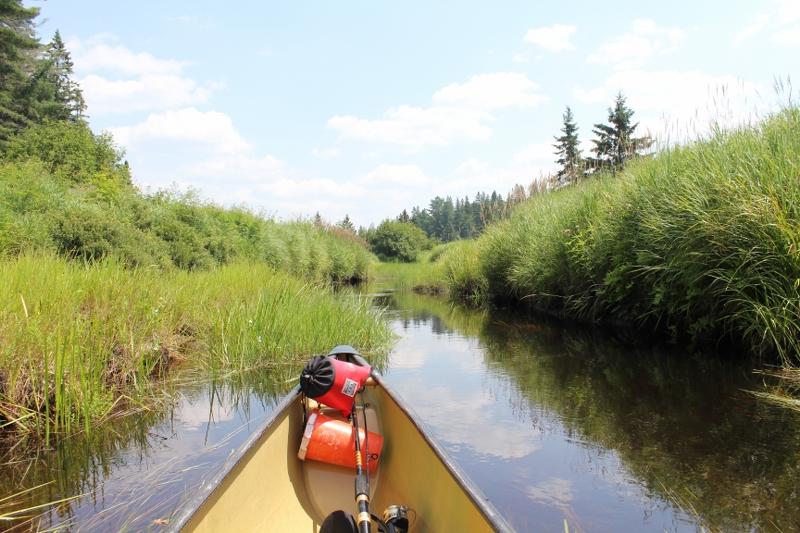 I continued down The Nipissing River and was really happy I didn’t have to contend with the alders like yesterday. The river was much more wide in general here and even when it became narrow - there were no alders, just tall grasses and high banks. As I came around a very tight corner I was treated with an amazing, but potentially dangerous surprise. I had spooked a mother moose and her young calf by coming around the corner too quickly., They were only about 25m down the river and this was too close for comfort. The mother moose looked like she was going to charge at me, but when her calf took off up the bank and into the forest, she quickly followed. That had my heart racing as I don’t know what I would have done to protect myself. The river was shallow and narrow. My option would be to get out and run but something tells me she would pin me down in no time. I’m really glad it didn’t go down like that.

Downstream landing of P365 and a seldom-used campsite

Finally out of the alders on the Nipissing River 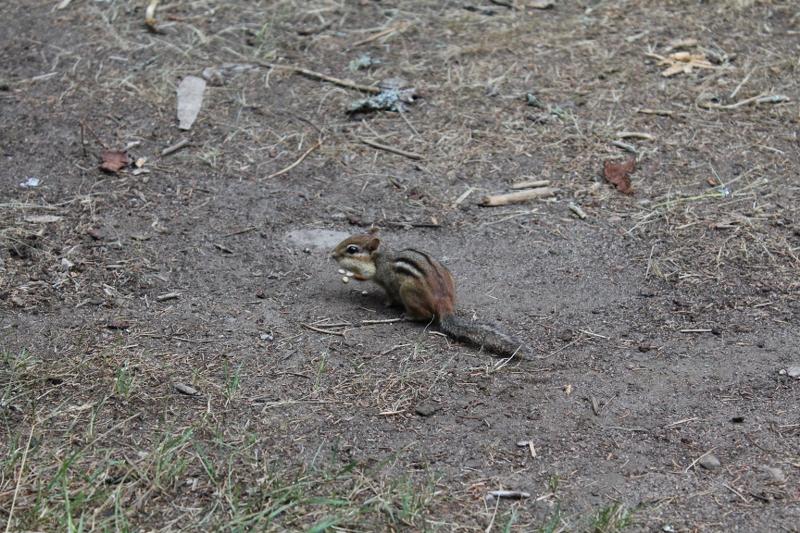 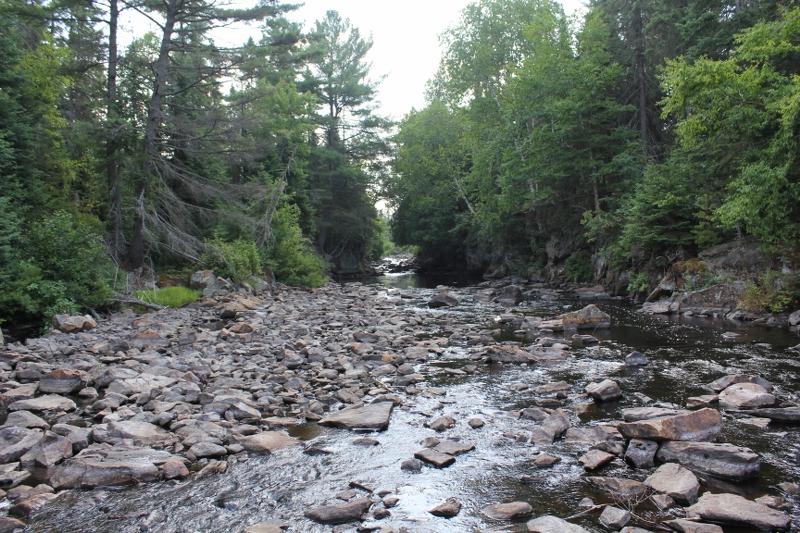 Mini-lily pads out front of my campsite

The cabin had a couple patio chairs so I took one outside and relaxed by the river with a drink. I brought a small bottle (1L) of Ginger Ale so I could enjoy some rye & gingers at the cabin – extra weight for sure but it was totally worth it. The bugs weren’t too bad here however when the deer flies did come around they usually wouldn’t leave without being killed - they are very persistent little buggers. I decided I would have an early dinner today which was bannock grilled cheese and soup. I went inside the cabin and prepared the bannock. With those ingredients mixed I placed some oil in the pan along with the dough and left it covered on very low heat for about 35 minutes. I like bannock but sometimes I get impatient with the slow cooking time – I was getting hungry. While the bread was baking, I laid my tent’s ground sheet on the bunk to protect my air mattress and set up my bed. I went outside and secured the canoe against the cabin wall then brought the paddles and PFD inside for the night. I wasn’t in a rush to get to bed, I just wanted all the little chores done before dark. Once the bannock was ready I sliced it in half and put cheese in the middle – almost like two calzones. As the cheese melted in the fresh bannock I made some instant soup and my meal was ready to go!