Stopped here for a quick break and some snacks 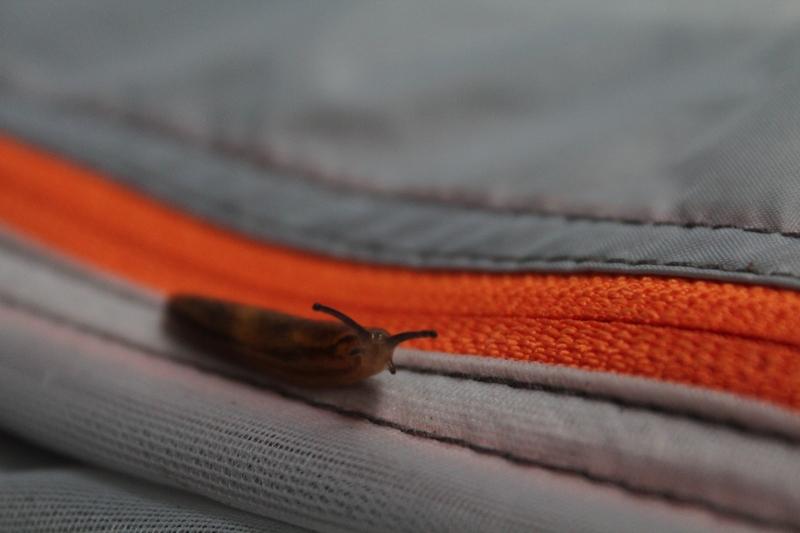 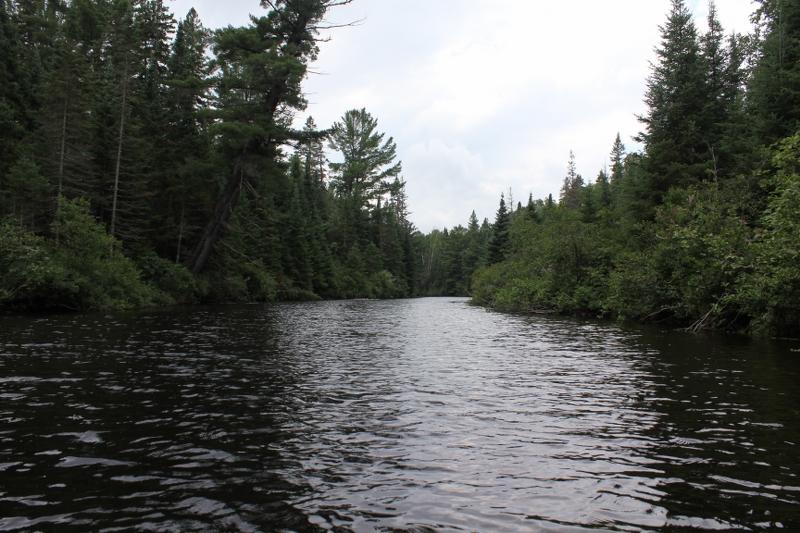 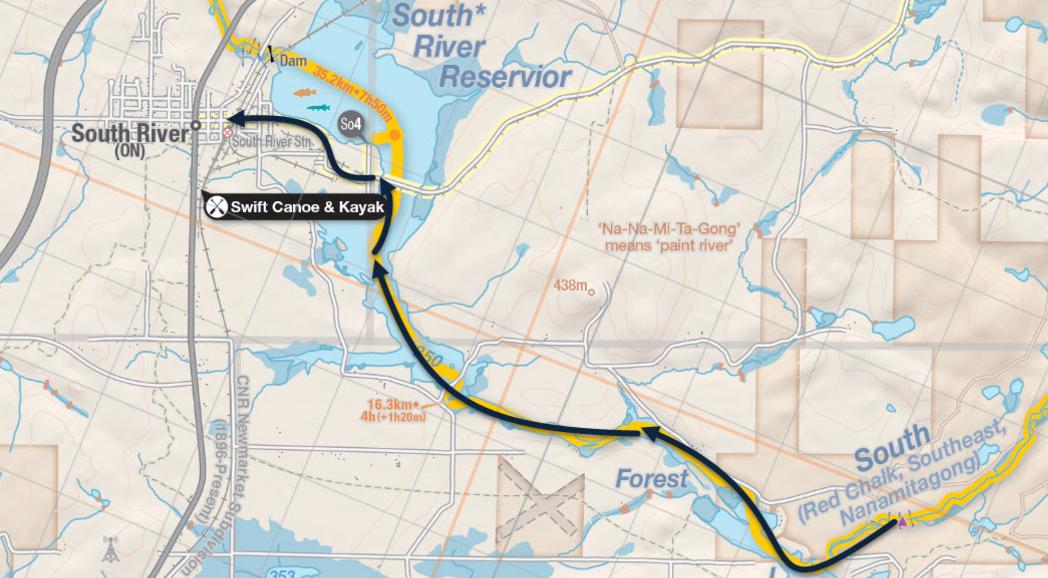 Continuing downstream on the South River 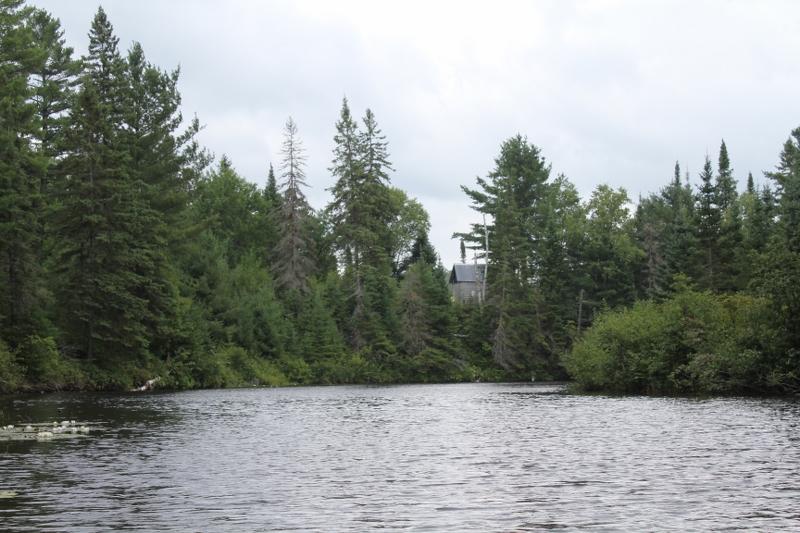 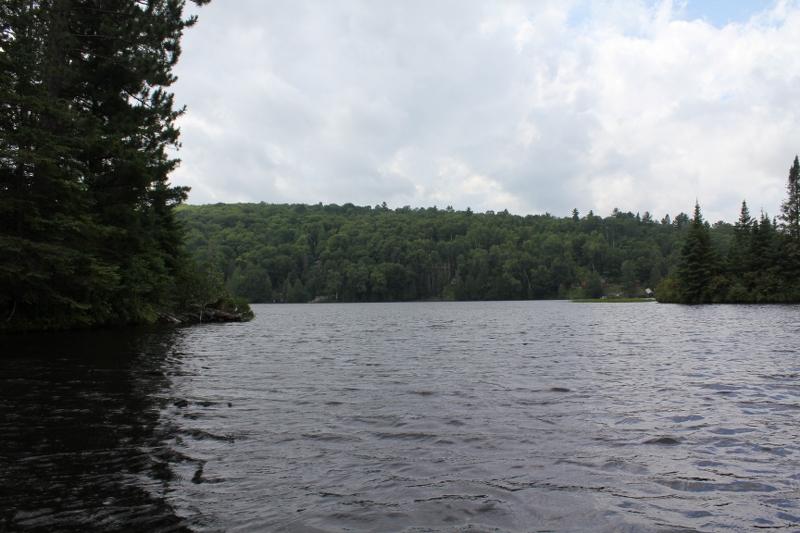 Talk about low-clearance - and I'm sitting on the bottom of a canoe!

The clearing I made for a tent pad - nice and level!

It may be small but it was quite cozy 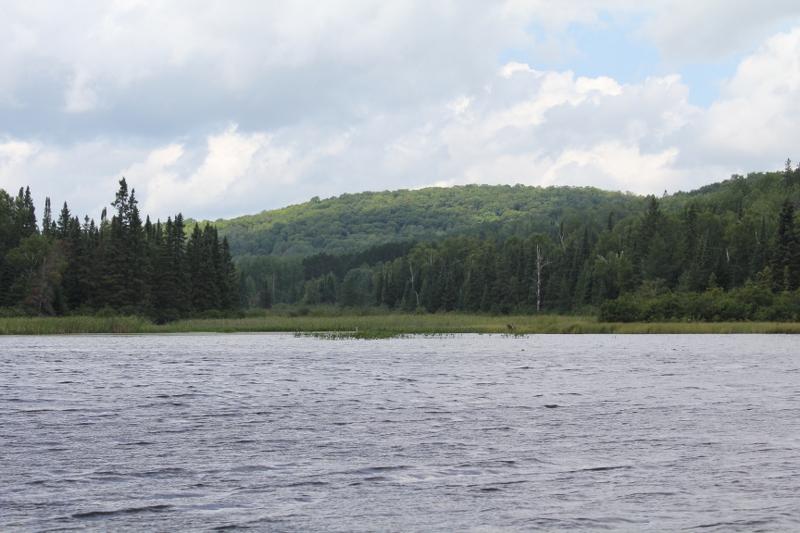 ALLLL ABOARD!!! My trip ended at a very historic site - how fitting :) 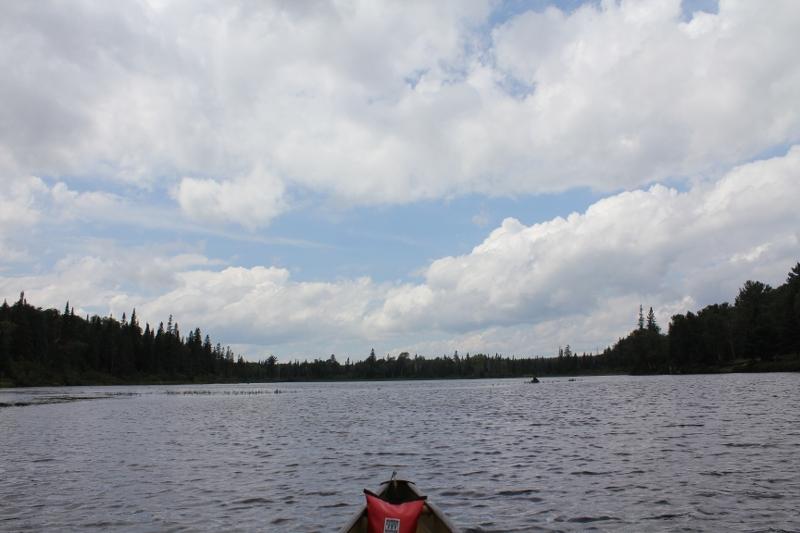 Making coffee in the tent vestibule to avoid being soaked - I didn't hang the tarp last night :( 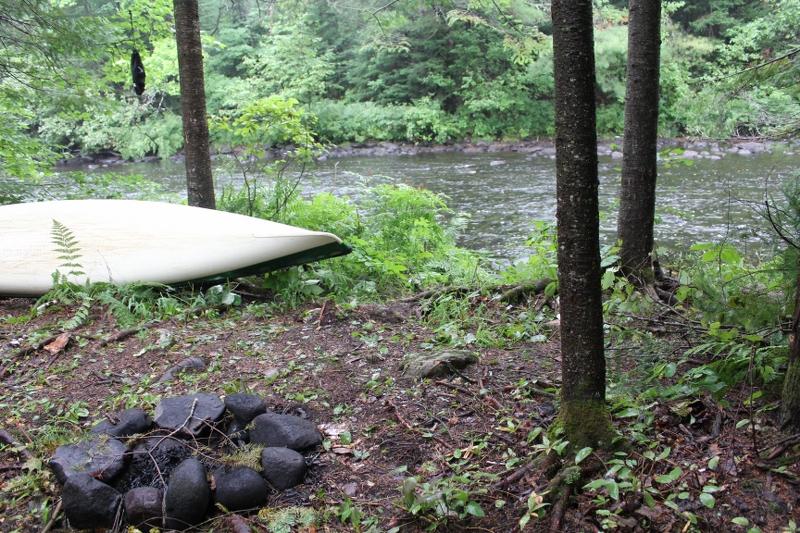 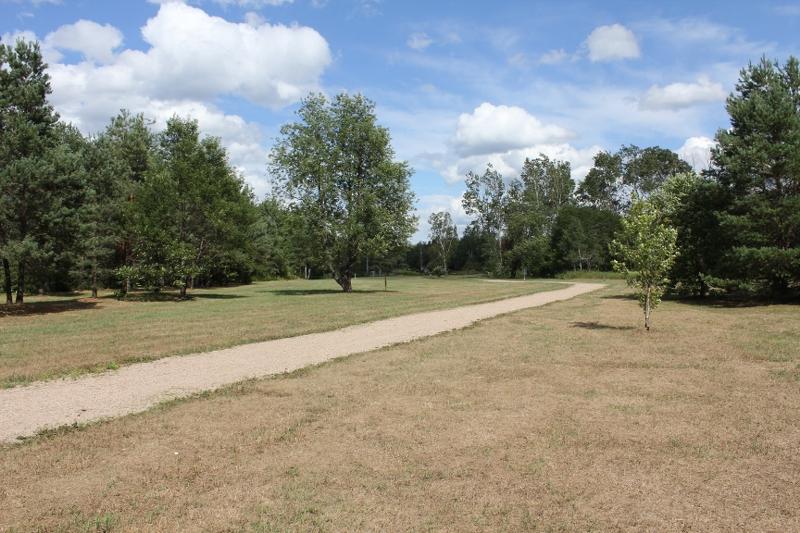 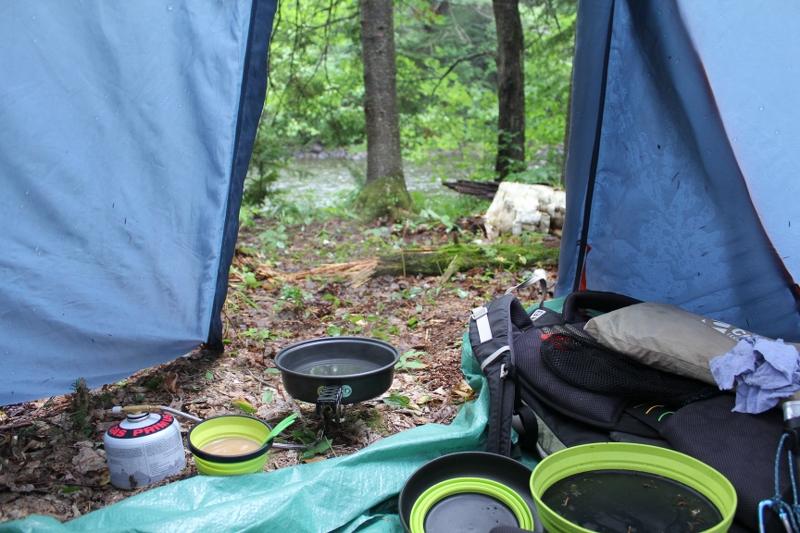 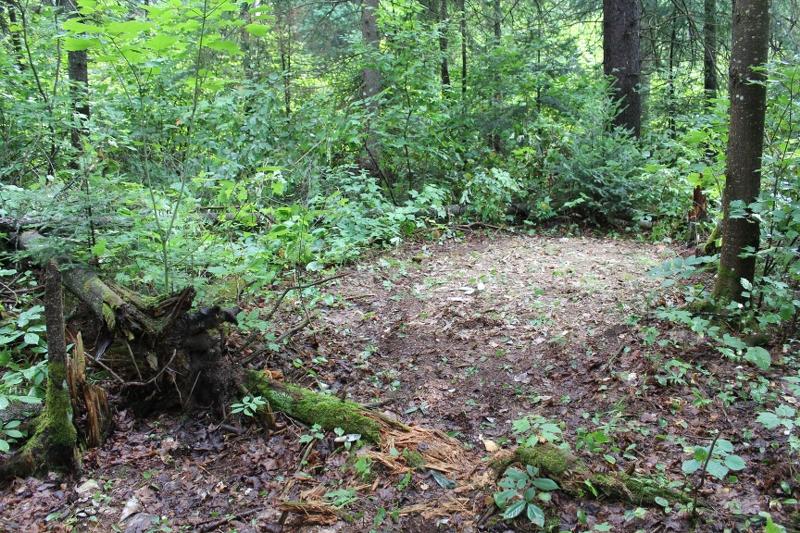 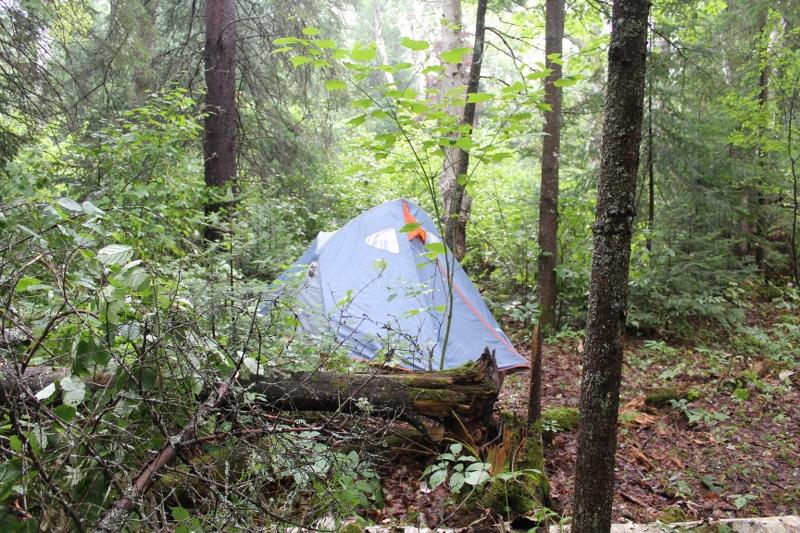 Looking up the South River from my campsite 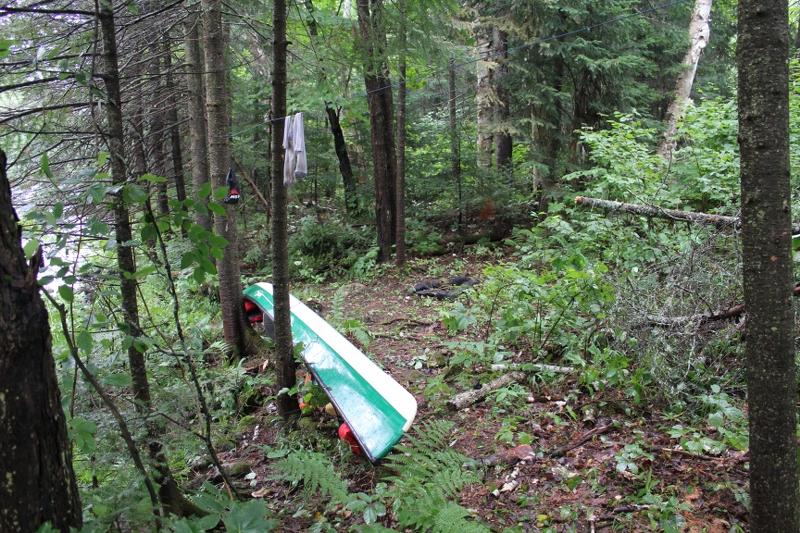 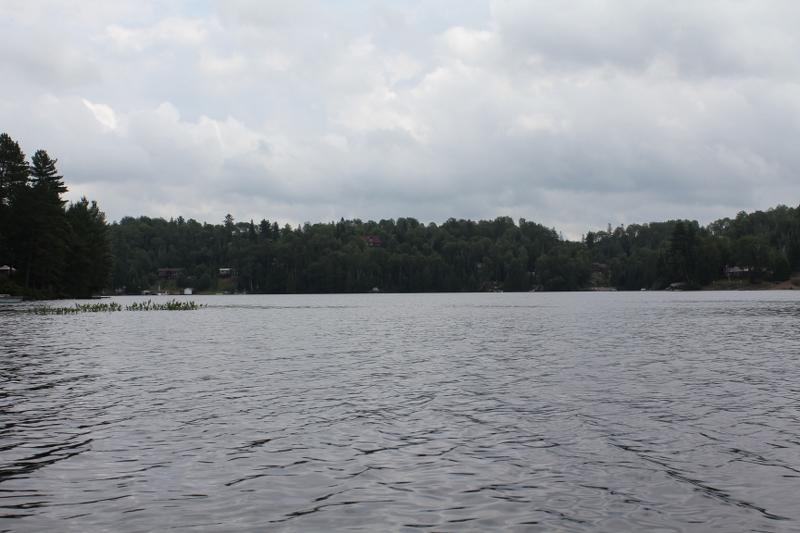 Nice portage! Or walking trail.. either way - it's flat! 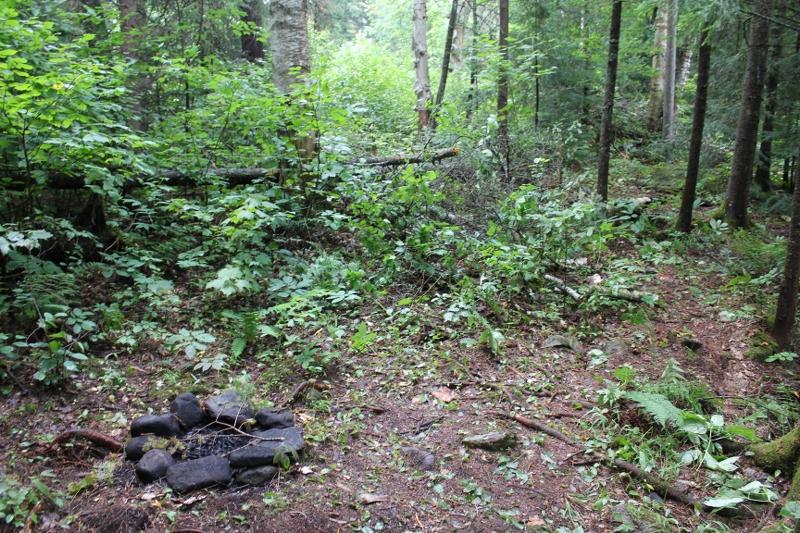 I loaded up and it took me less than ten or fifteen minutes to walk from the park to the train station and not a second too late – just as I dropped my canoe and pack, my friend zoomed by down the road – she didn’t see me! A quick phone call and she turned around to head back to the train station. The original pick-up location was at Access 1 on Kawawaymog Lake, but obviously with my new adventure that couldn't be. So last night I checked for cell reception and I had it, then sent a text to advise of the new pick-up spot. It worked out for everyone too as I got more of an adventure and I also saved my friend 60 km of driving! I loaded the canoe on the car and changed my clothes, then we made our way to Huntsville for chicken wings, beer, loaded potatoes and more beer - oh and nothing but sun on the patio. It was a little weird going from seeing almost no one for the last 16 days to a patio chalk-full of people – all within just a few hours. Took more than a little adjusting but eventually the reality of life came back to me and I almost couldn’t believe how I just spent the last 16 days of my life. It was out-fucking-standing and next year – I’m going for three weeks!

Continuing up a narrow Forest Lake

I broke camp and had everything packed away by 1pm. I figured 3 hours to paddle 8kms was more than sufficient so I was still in no rush to leave. I snapped a few photos and poured my last coffee of the trip – in fact, aside from a spare dehydrated meal (intentional, just in case), a Clif bar and about 200g of peanuts – I had completed depleted my food supply. Amazing! I was really proud of my ability to accurately and efficiently plan and prepare sixteen days of meals – to a tee! I savoured my last cup of coffee down by the river bank and by 1:20pm I decided it was time to leave this one man's wilderness. I packed the canoe, did a once-over of my campsite and started river walking. After talking with Peg yesterday, I was relieved to know I would only be river walking for about 200m or so, then it would be smooth sailing back to the town of South River. Sure enough, after around ten minutes of walking the river it turned a corner and became deep again.

By 10am I poured a second cup of coffee because hey – it’s my last day – I can do whatever I want! By this time the rain had subsided so I got out of the tent to enjoy it. I debated have a small fire, but decided lighting wet sticks wouldn’t be worth the trouble, it rained really hard last night. My coffee was finished so I added more water to the pot and made my last three packets of oatmeal. I was surprisingly hungry and had no trouble getting 3 packs of oatmeal in me. I was being super lazy about my day; my ride wouldn’t arrive in South River until 4pm and it was only around 8km to get there. I left my tent standing until around noon, hoping it would dry out and save me the hassle of doing it at home on my balcony. At noon, I figured I better start packing up and getting ready for my final day of travel. The idea had me excited and sad at the same time. This was kind of how I felt on Three Mile Lake when I realized the trip was coming to an end, but much worse.

I woke up around 8am today. I didn’t get the best sleep as the rain was pretty loud and consistent throughout the night. It was still raining at the time I woke up, but not very hard. I decided to retrieve my food & pots and make breakfast in the vestibule. I wasn’t worried about spills or scents because it was just coffee and oatmeal. I put a pot of water on the stove and opened the vestibule to avoid breathing in the gas fumes. I poured a cup of coffee and sat up in my tent, looking out over the river from my bushwhack campsite. What a trip it had been so far – especially the last few days. I found myself in a near day-dream or daze, just thinking about everything that happened over the last 16 days. 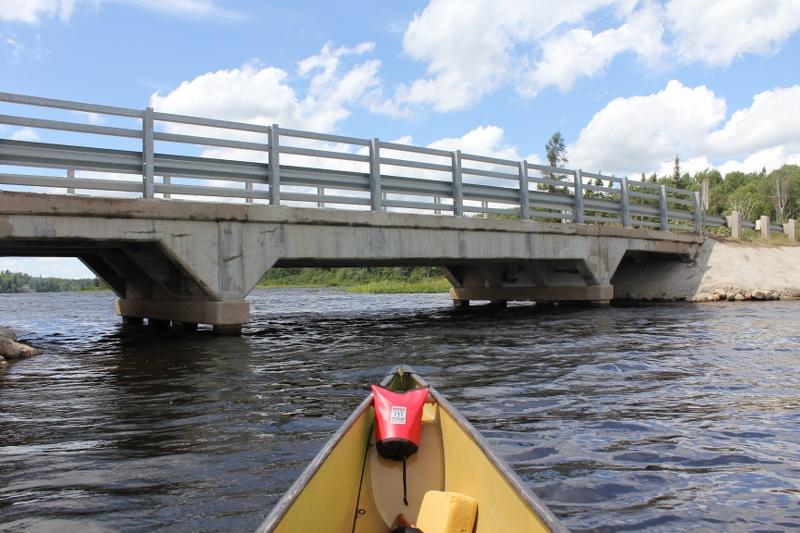 After roughly a kilometer of paddling I reached Forest Lake – which is really just a widening of the South River. I saw a shoreline very different from the ones I viewed over the last two weeks – it was peppered with cottages, docks, boats – you name it! I made my way along the north shore and had to battle a bit of wind but nothing too troublesome. Another hour passed and I arrived at a very low bridge and a group of people fishing from a boat launch. It looked like a family just out for a good time on a Sunday together. I took a short break and had my last Clif bar with some water before moving on. Once on the other side of the land bridge, the wind really started to pick up. It was as if mother nature wasn’t done with me yet, and suddenly I was faced with a very strong headwind. It’s not that it was unmanageable, it was just taking every ounce of effort to keep the canoe going straight. As I entered the expanse of the South River Reservoir I was now dealing with a gale force wind. It was strong enough that I was finally ready for the trip to be over. I struggled to make forward progress, tossing out the occasional curse word, or two, or ten as the wind blew extra hard. 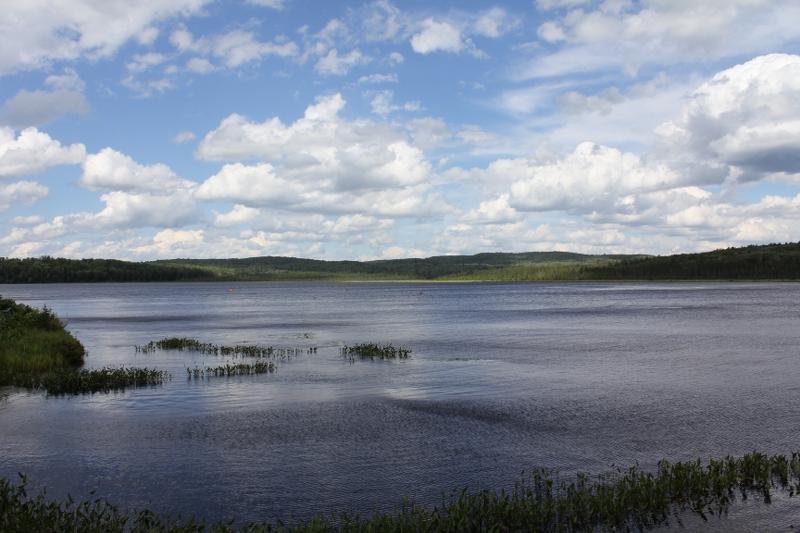 A hunt camp along the South River

My old Tarn 3 sits on it's custom made tent pad 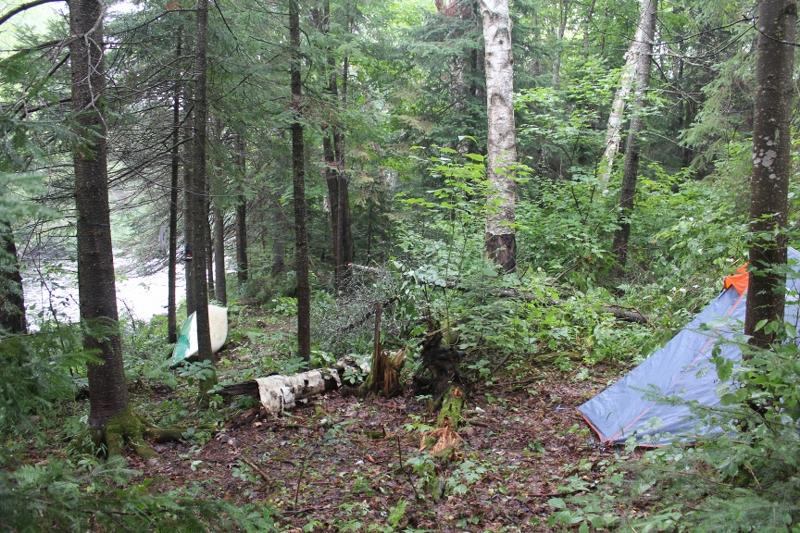 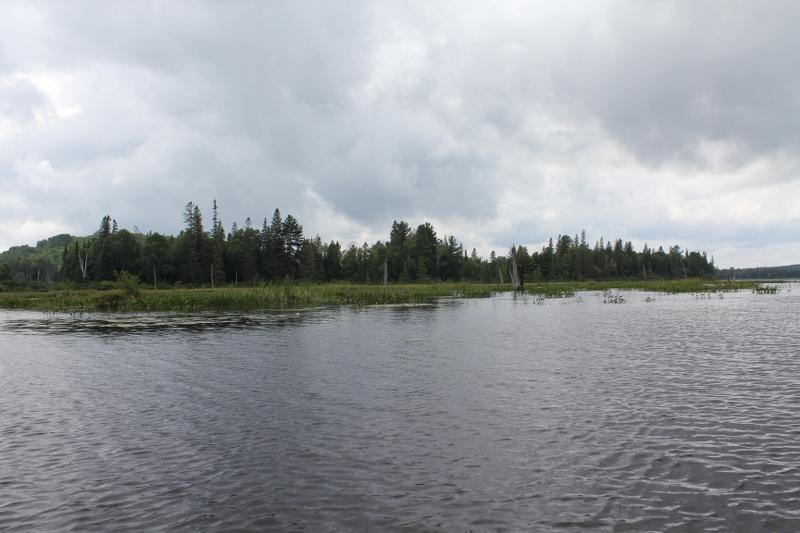 My very small, homemade campsite along the South River 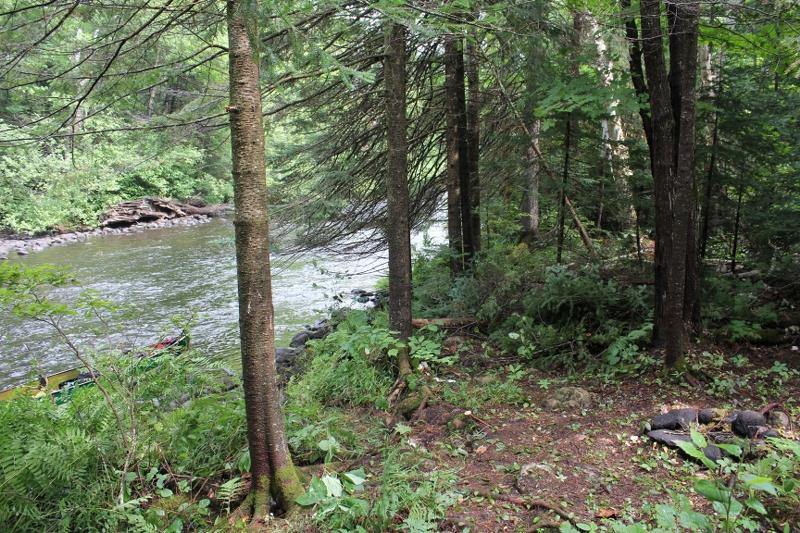 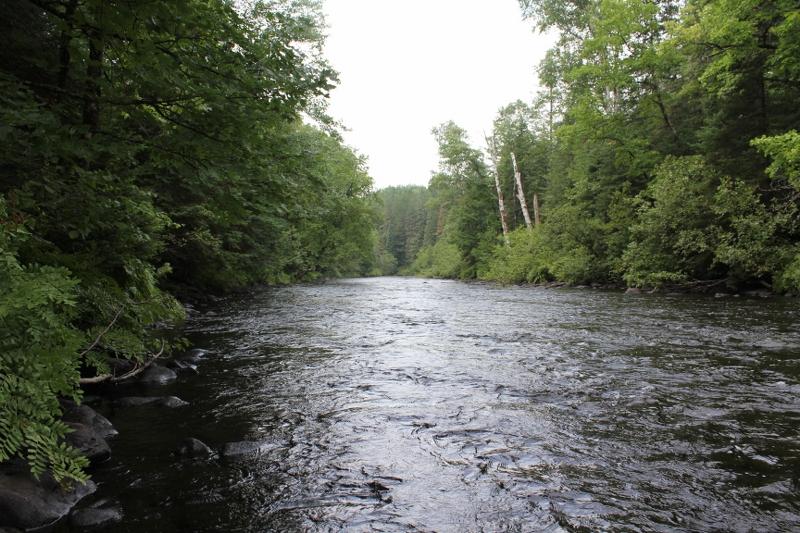 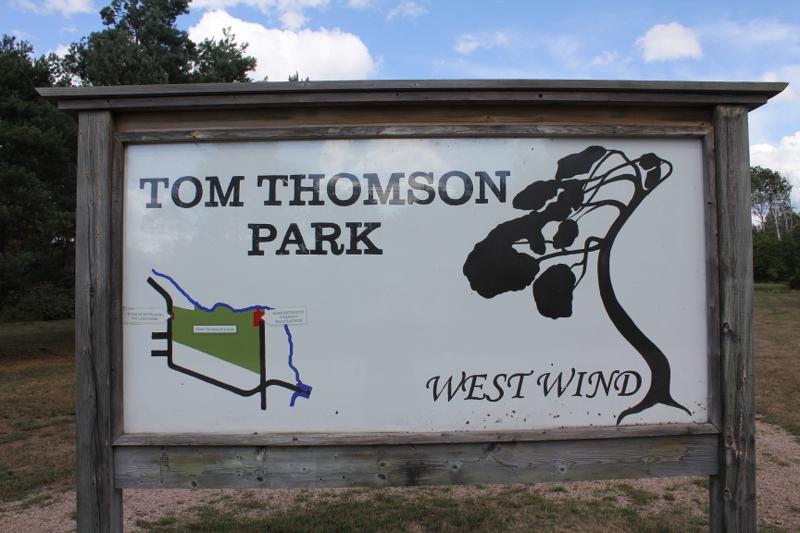 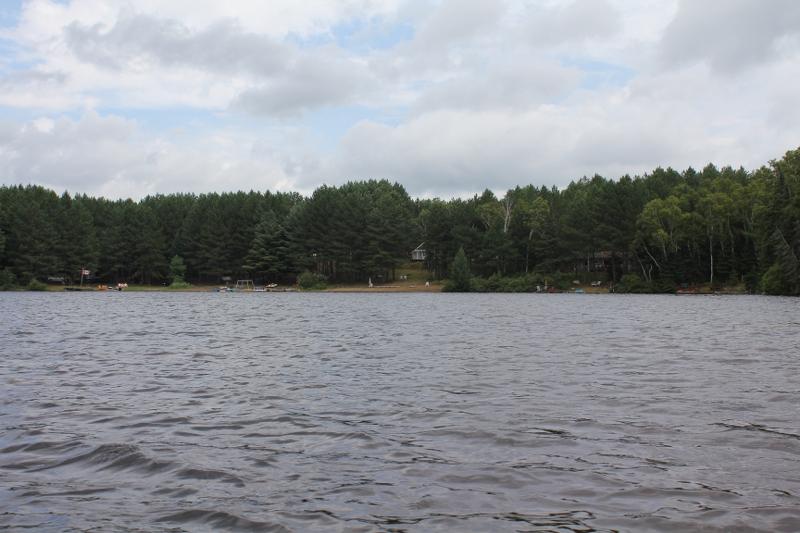 Cottage Life - not too shabby!

It really was a very small and bushy site - but I liked it! 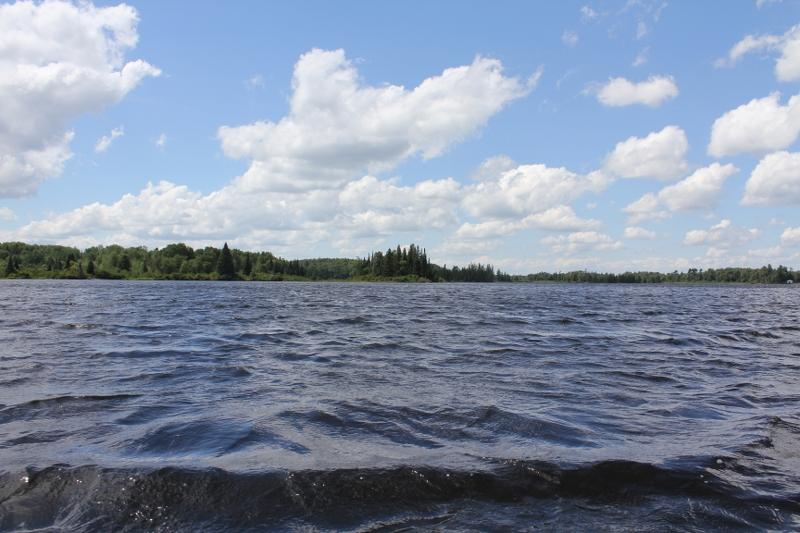 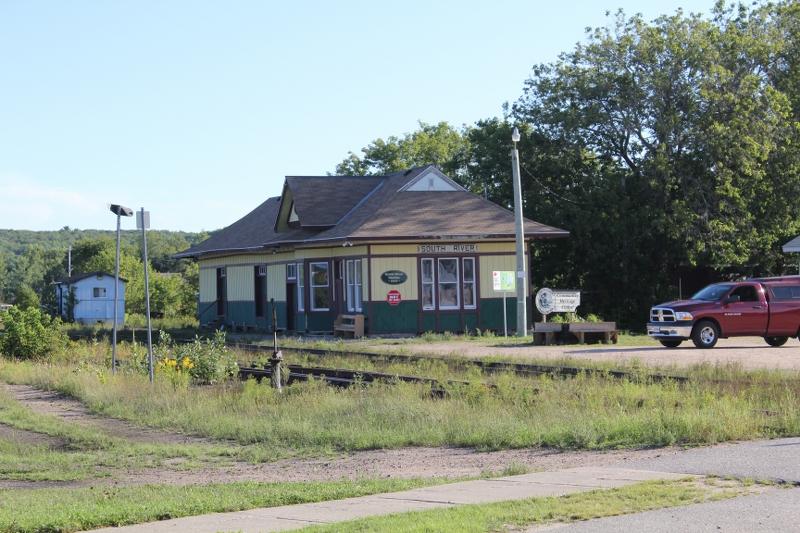 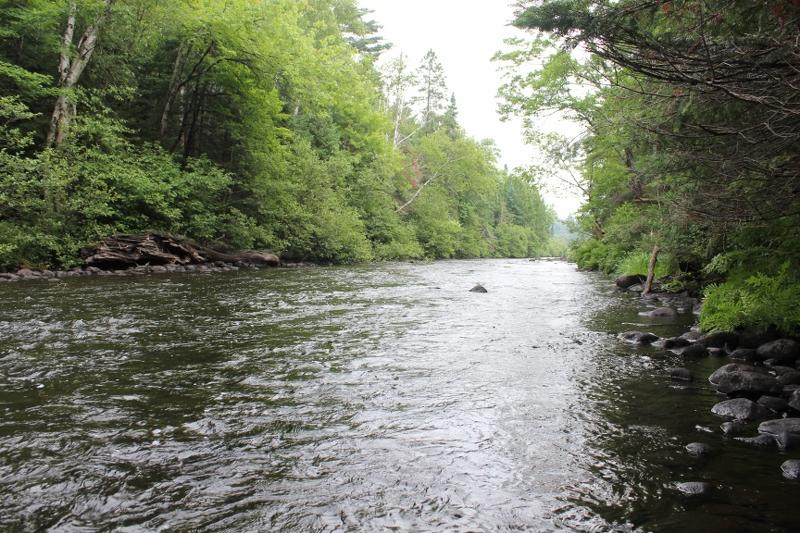 The campsite had a great view of the river

Looking down the South River from my campsite

I had a slow-moving visitor this morning

My plan was to land at the Swift Canoe store but they recently re-loaded to the main part of town, but I didn’t know that so it had me confused as I searched for it. All I could see was private property so I decided to land my canoe among the huge rocks that make up the current land bridge across the reservoir. I carefully unpacked the canoe and brought my gear and pack up to the side of the road – I guess I’d be portaging from here. I took a short rest before loading up for the final carry – roughly 1.5km to the South River train station. I was making decent time too – it was around 3:45pm but I received a text that my friend was running behind by half an hour – perfect! I grabbed my gear and started walking down the road. I was getting funny looks form people as they passed by, probably wondering where the heck I was going. I took a break at Tom Thomson Park and finished the rest of my peanuts and water – that was it for my food, except the extra dehydrated meal that I planned to exit with! Literal food perfection.