A calm evening with campfire smoke headed across Thunder Lake 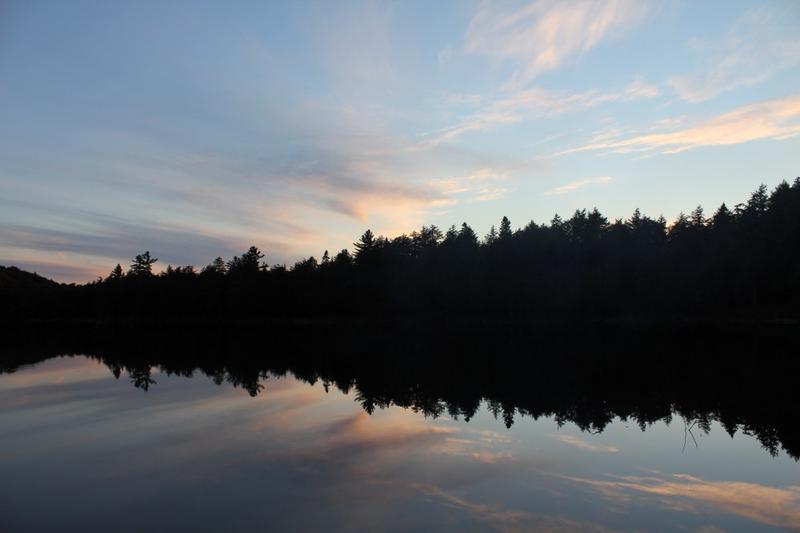 I hope nothing too terrible happened here... 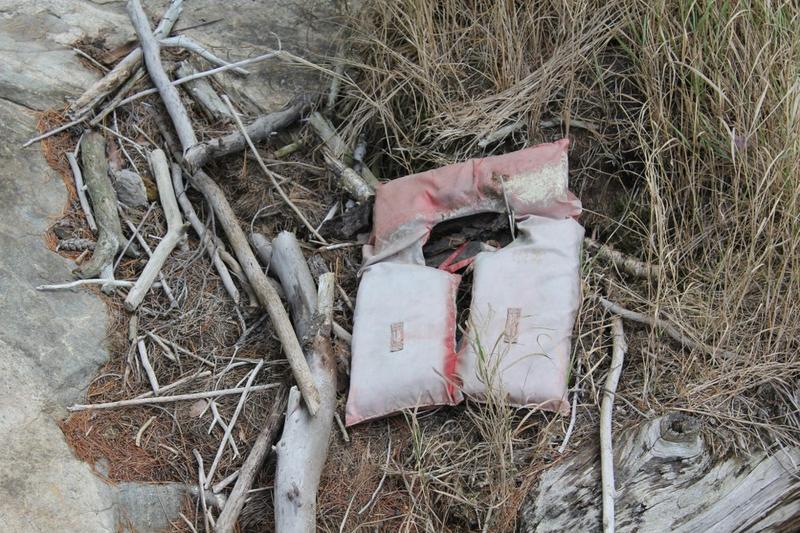 A few friends (Markus, Jeffrey and Sean) signed the lean-to on a winter trip 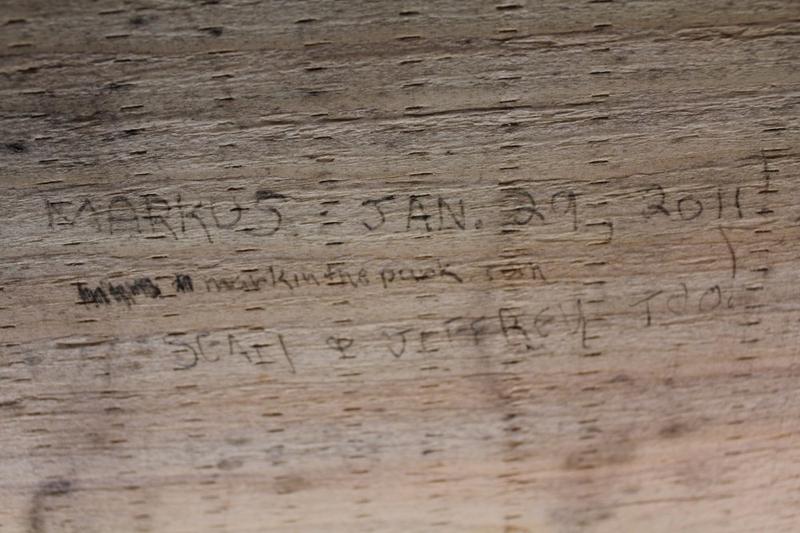 We decided to take our relaxing to the next level and poured some rye and ginger ale then sat down by the fire. After a couple drinks the munchies kicked in and we figured now would be a good time to get dinner going. Tonight we would dine on steak, mashed potato and grilled zucchini. We let the fire burn down to coals then as I was about to prepare the steaks I realized we have a problem – no grill. This hasn’t happened to me before but I knew it was a matter of time. Usually all campsites have a grill – even if it’s nearly in pieces. The only viable solution was to check the other campsites. First we walked over to the backpacking site to check for a grill and nothing. We walked back to our site then launch the canoe to paddle over to the canoeing campsite. When we arrived there we found it wasn’t the best campsite and probably hadn’t been used in a couple years. After a few minutes of looking around we finally spotted a grill under a pile of wood. We grabbed it and got back in the boat. With our coals still red hot, we placed the gill on top and let it burn for a while – who knows what stuff was on there and for how long. I seasoned the steaks with Montreal stake spice and threw them on the grill. I sliced up some zucchini and tossed them on too. While the steak was cooking I used my stove to prepare the mashed potatoes. I like my steak rare so it wasn’t long before I flipped it then pulled it off. In about 20 minutes dinner was done and we were eating a delicious hot meal while enjoying a warming fire. By now it was close to 8pm and we spent the next couple hours next to the fire, enjoying more rye and ginger ale. Around 10pm I was getting tired from the day and decided I was gonna go to bed. We hung the food bag and I retired to the tent. Shane stayed up a few minutes longer while I settled in the tent and eventually went to bed.

Looking back at the 'portage' from the landing at Tonakela Lake

About 20 minutes after launching we arrived at the take out to Sam’s Lake. It’s a short trail measuring 455m. Though this trail (and all others on this trip) is in a low-maintenance area, I was happy to see the landing and the trail in such good condition. It was well-defined and there were no blockages. It had a bit of an uphill climb but with the trail being so short it was easily covered in under 10 minutes. As we launched onto the swampy Sam’s Lake we paddled directly over to the channel leading to Gill Lake as we were hoping to skip the little portage. Unfortunately the water levels were too low and we had to back track through the shallow muddy water to take the portage. We made quick work of the 110m trail and launched onto another swampy and shallow lake – Gill Lake. I believe this lake used to have a campsite on it and I could see why it was removed, I doubt anyone would want to make camp on a swamp. As we arrived at the take out to the 1,850m portage leading into Drummer Lake we took a short break and had some snacks. It was still very early in the day so we were not in any type of rush. Just after 10am we started down the trail. I don’t remember much about the condition of this trail, so it must have been decent. However I do remember thinking it felt much longer than 1,850m – it just took us so long to cross it. After almost an hour we finally arrived at Drummer Lake. I was on the lookout for something called a ‘Pine Stump Lean-To’ as indicated on Jeff’s Map. At the time, I didn’t know what a ‘lean-to’ was and I had no clue what I was looking for. A giant pine stump? One you could lean against? No clue. I set out trying to locate said lean-to when Shane pointed up on the rocky hill and says ‘I think that’s it.’ I looked up and immediately realized my mistake! ‘Ohhhh, a lean-to – like a survival shelter!’ He laughed for a couple minutes about this, joking about all the different things I thought a ‘lean-to’ might be.We hung out at the lean-to for about a half hour or so and I noticed the signatures from some friends on the underside of the roof. I told Shane this would be an awesome place to come and winter camp – except it’s a bit further than I like to travel while winter camping. I snapped a few photos and we decided we should get going as we still had two more portages before we would be at Thunder Lake. As we paddled through the channel leading to Little Drummer Lake I took note of the campsite there. It was on a huge rock point and looked very inviting. I really like rocky outcrops for campsites. One day I will return to this campsite, but for now we kept paddling until we eventually reached the 540m portage to Tonakela Lake. 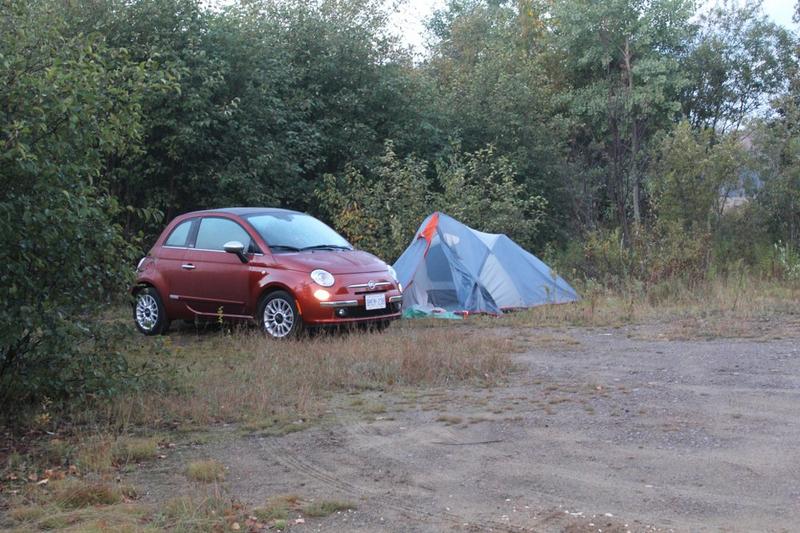 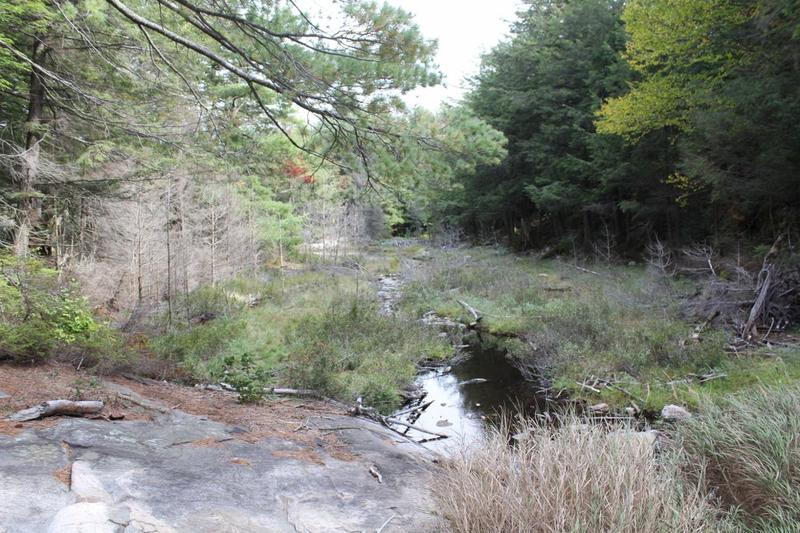 Where's the rest of the portage? 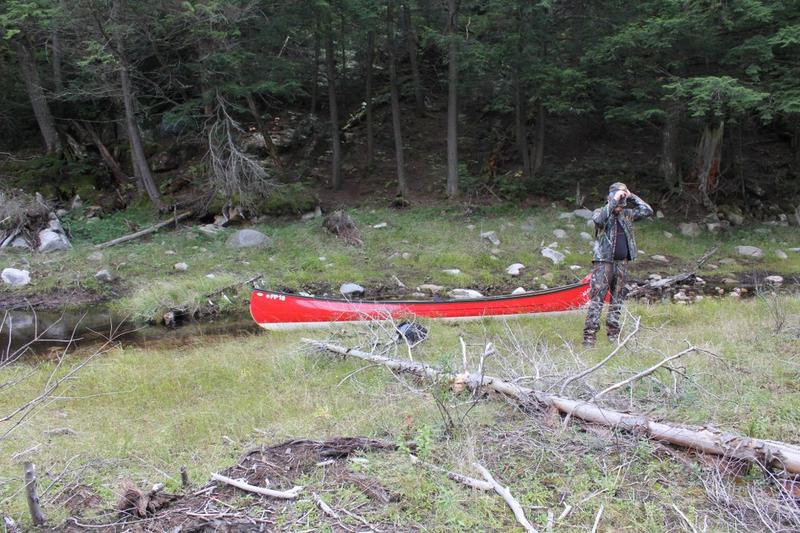 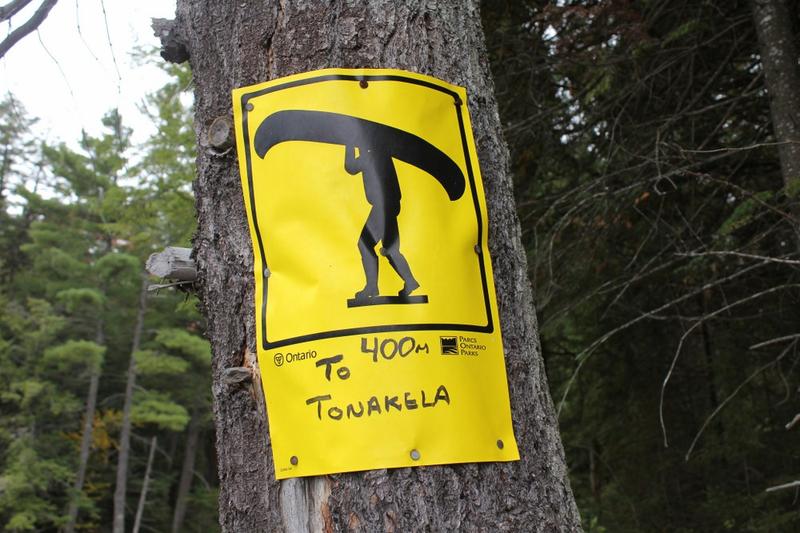 A secret spot to spend the night before a canoe trip 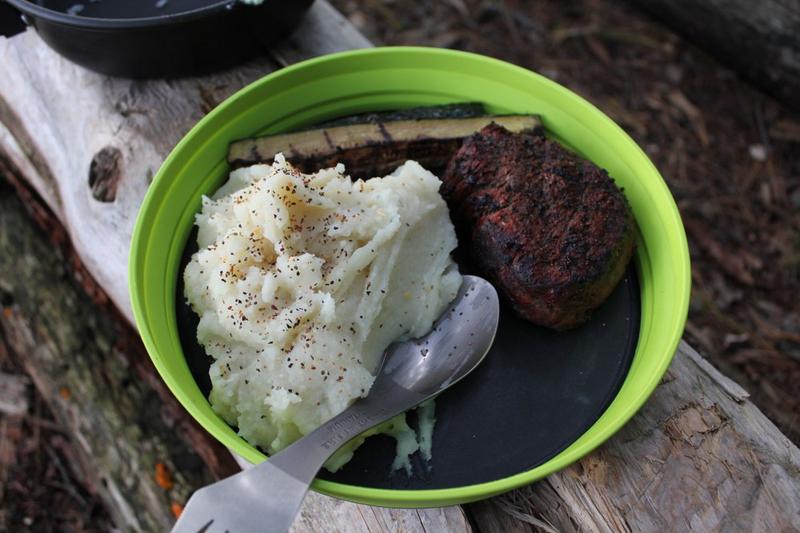 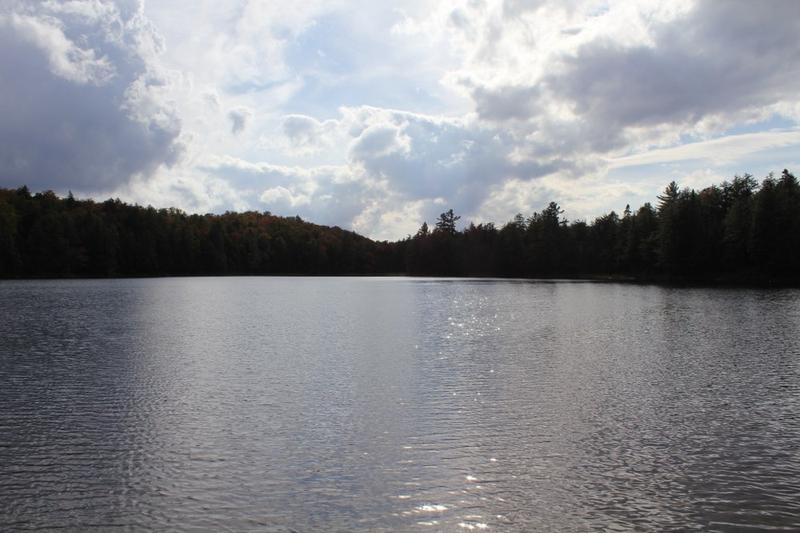 This was an interesting trail to say the least. It starts off innocent enough, but as you near the end it opens up into a marshy field and makes you wonder where to go next. There is a small creek that appeared to go to a lake – but it was way too small to float a boat in. We decided to drop the gear and boat then follow the creek on foot, just to make sure we were going the right way. As we approached the lake we saw the signage and realized this was the trail to follow, it was just very faint. At the end of this trail was one of the larger log-jams I’ve seen to date. It was kind of spooky because there was a shoe and an old faded life jacket among the debris – it just looked weird. We launched onto Tonakela Lake and continued straight across to the next landing which would take us to Thunder Lake – a place we would call home for the next 3 days. We arrived at the take out and prepared for the last portage of the day – a 970m trail. Once again I was happy with the condition of the portage but it was one of those trails where you swear it’s much longer than signed. It just seems to carry on forever – I don’t know if I was just too tired, or if it’s actually singed incorrectly but it was a long carry. When I arrived at the other end, I set the canoe and pack down, then leaned up against it and rested my eyes. Shane was behind me on the trail somewhere and I didn’t mind having the extra few minutes to relax. It was so peaceful looking across Thunder Lake I was eager to get to camp and let the real relaxing begin.A few minutes later Shane showed up and also commented on how long that trail was. Never the less it was behind us now so we launched the canoe and paddled across to check out some campsites. We had a backpacking permit because we knew the better campsite was a backpacking site, not the canoe site. We landed at the first campsite and found it wasn’t anything overly impressive. Leaving the canoe at the first site, we walked the hiking trail over to the next one – which we found to be in better condition and also had a better view of the lake. We went back to the boat and paddled over to our new home. We arrived here just after 3pm – not the fastest day but we weren’t in a rush. While I set up the tent Shane was out and about collecting firewood and scouting the general area. 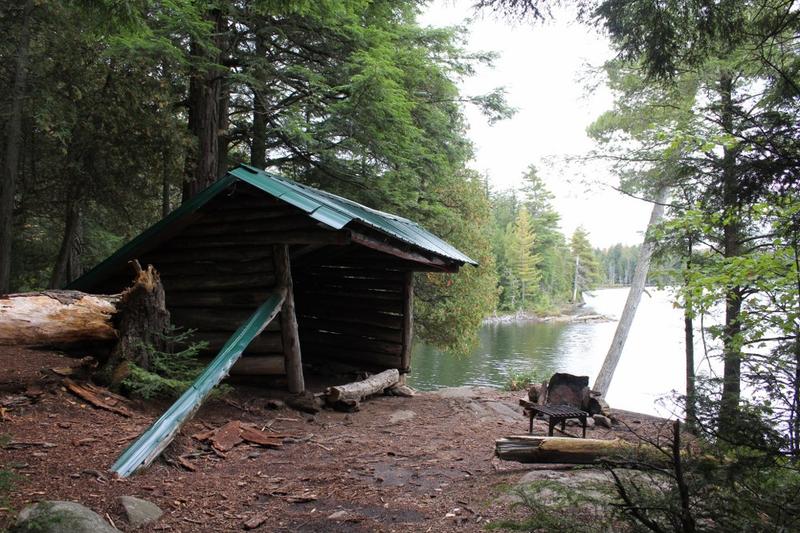 A quick break before the first portage of the trip 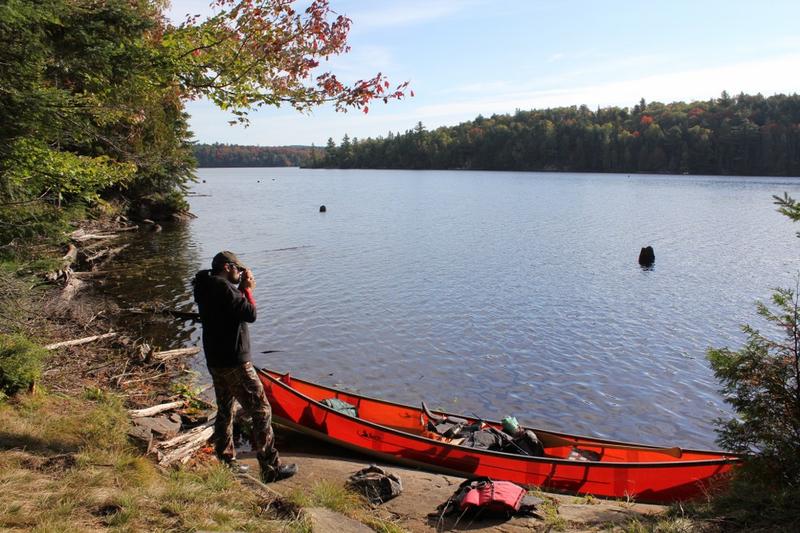 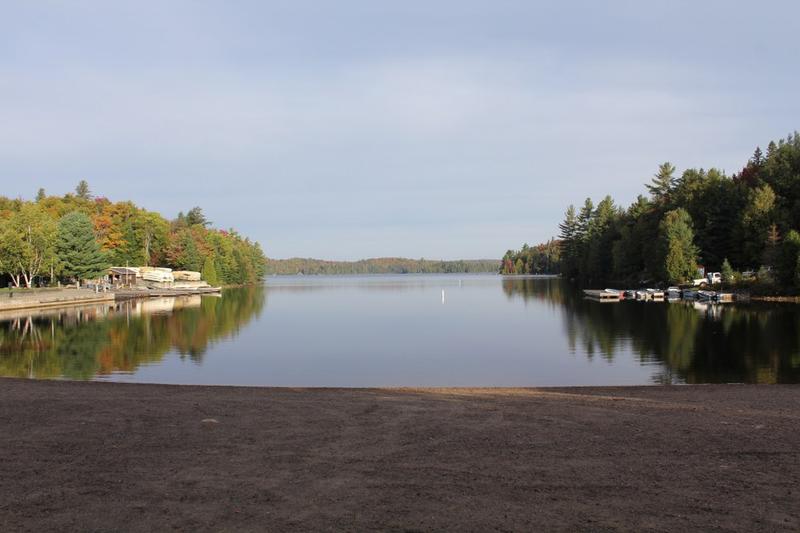 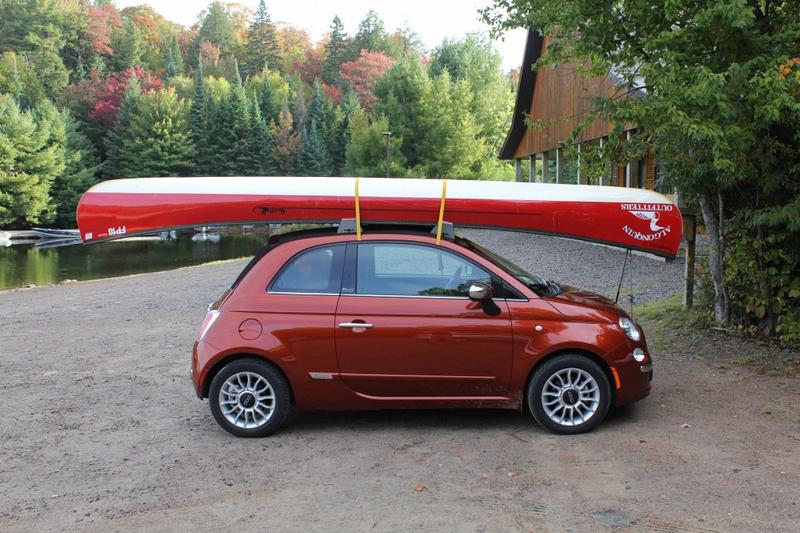 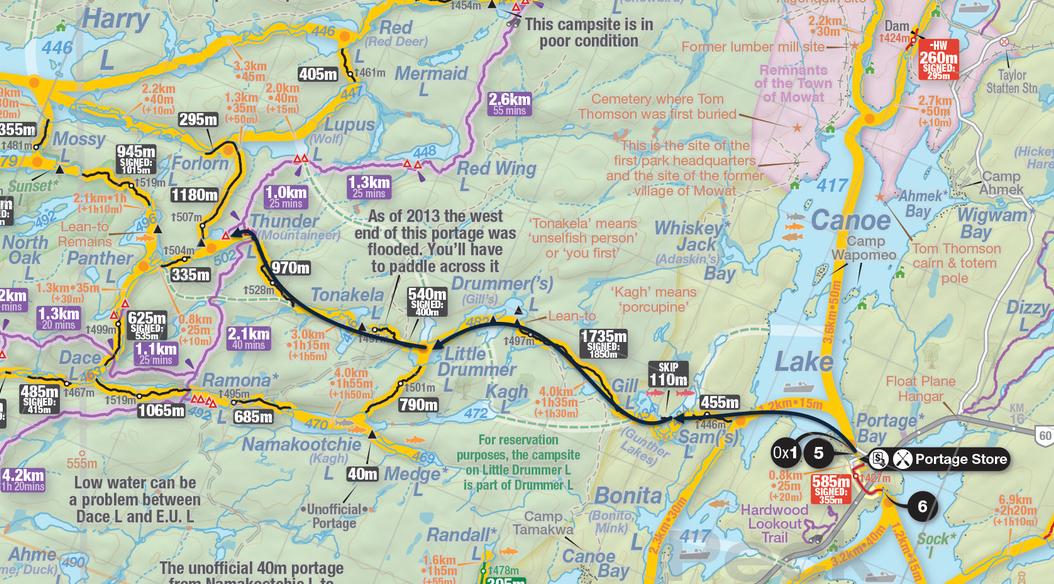 Awake and outside of the tent by 7:30am. I know what you’re thinking – where’s the beginning of this trip report? But don’t worry, this is the beginning! I have a little spot on crown land that I like to use for overnight camping when I am headed in anywhere along the western portion of Highway 60. It’s a little spot tucked away with enough place to park a car, set up a tent and it even has a little fire ring. It’s about a 15 minute drive from Canoe Lake. I’ll typically make use of this spot to enable an early start to the day without having to wake up at 4am to make it happen! Today I was leaving on a short but sweet 3-day trip with my good friend Shane. Shane was one of the guys who originally introduced me to Algonquin a few years before and is one of my favorites to go camping with – let’s face it, some people are better at this than others. We packed up the sleeping bags & pads, and eventually the tent. With everything packed up we jumped in the car and made the quick drive down the highway to Canoe Lake. It was a cool September morning and there were absolutely no bugs in sight – a perfect start to the day. With our permits in hand we launched onto Canoe Lake at 8:30am. The lake was dead-calm and there was nobody else around – I love September tripping!