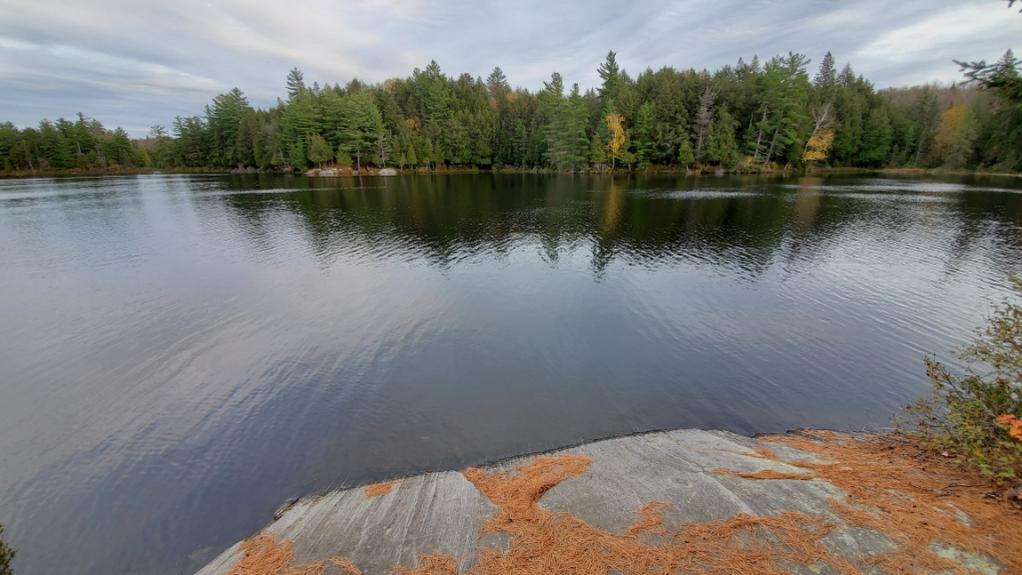 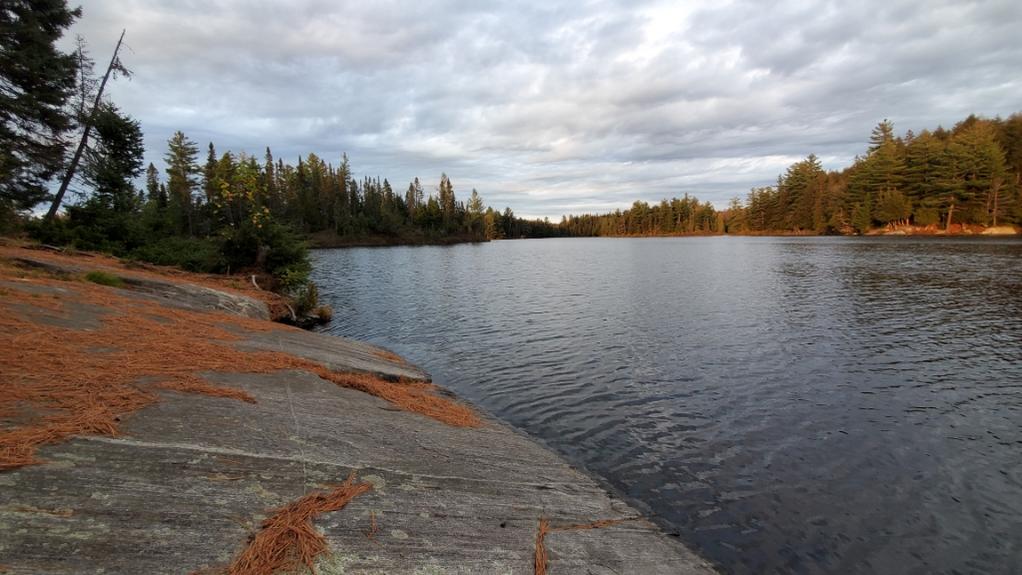 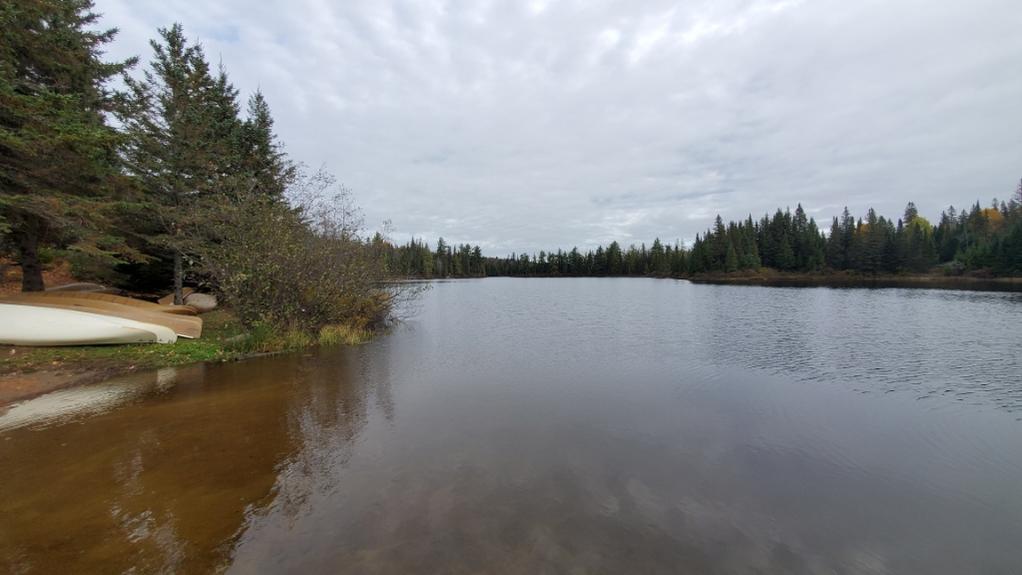 Pulling up to the campsite with a canoe load of firewood 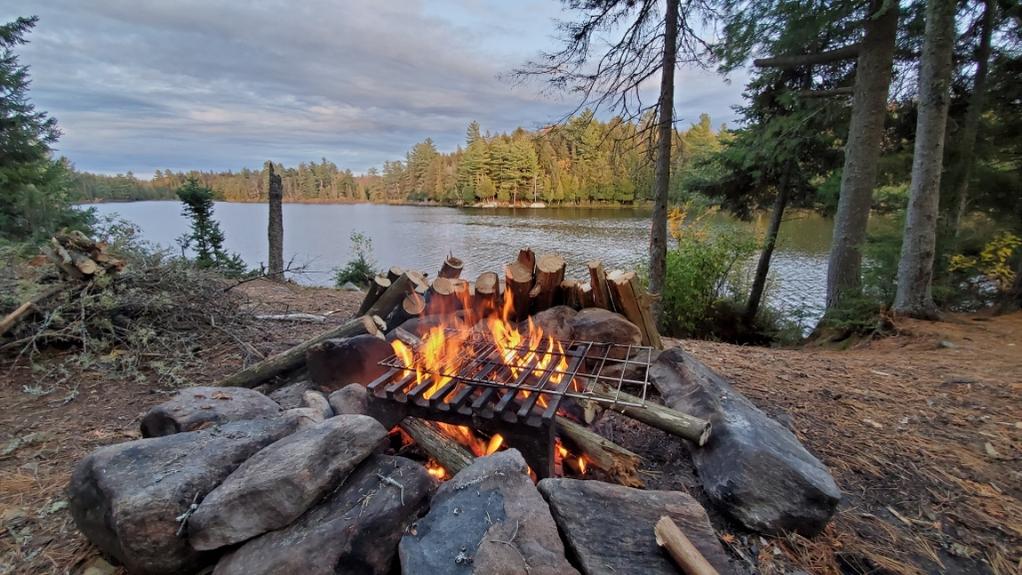 I arrived at Rain Lake access point shortly after 10am. I’m not sure why, but I don’t really like this access point. I’ve only been here once before, almost 10 years ago and never came back. Maybe it’s the name? There were a few cars in the parking lot and as I was unloading my car a couple and their dog pulled up. The look on doggos face was priceless, I think he was more excited about the canoe trip than his owners. A quick check to make sure I didn’t forget anything in the car and by 10:30am I was paddling up Rain Lake.

Looking across Juan Lake from P450 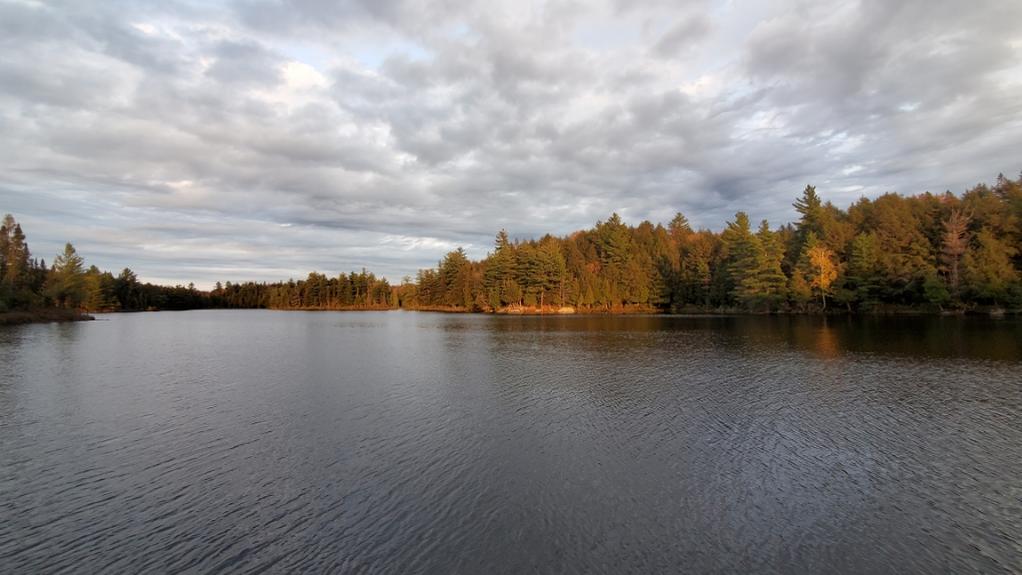 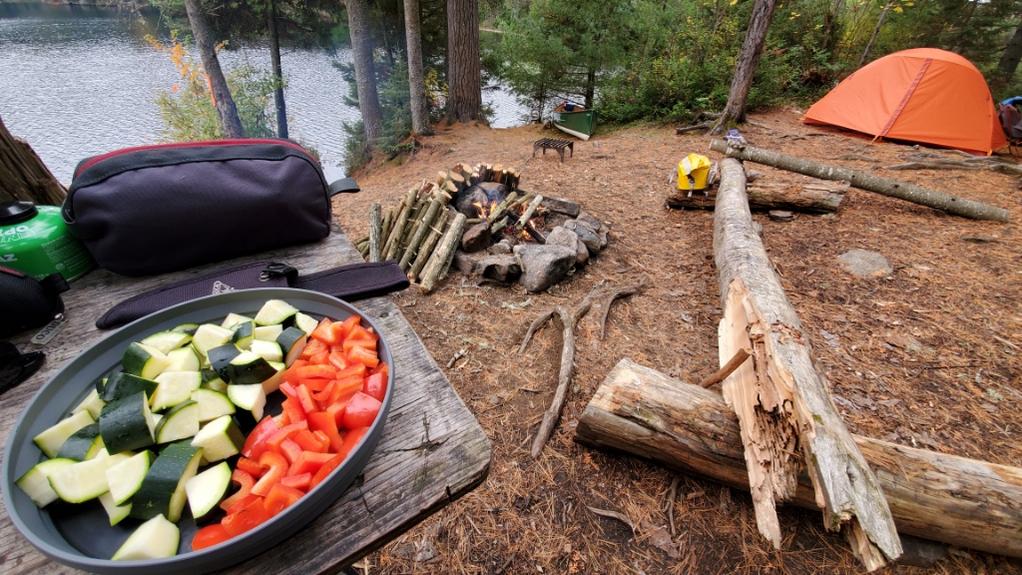 I cleaned up after dinner and sat by the fire, enjoying the evening while sipping on whiskey. Then something happened. Something almost terrible, something that could have ended the trip (or worse) right then and there. It was already too dark to show you, but the next morning it’s very clear.

Pretty calm... for now. These long, skinny lakes have a tendency to kick up winds seemingly out of nowhere 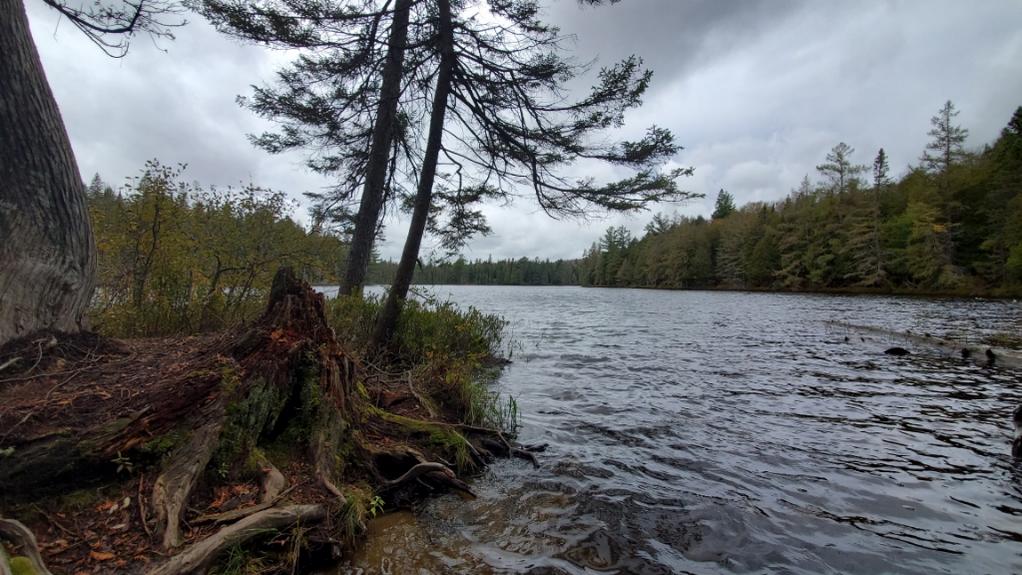 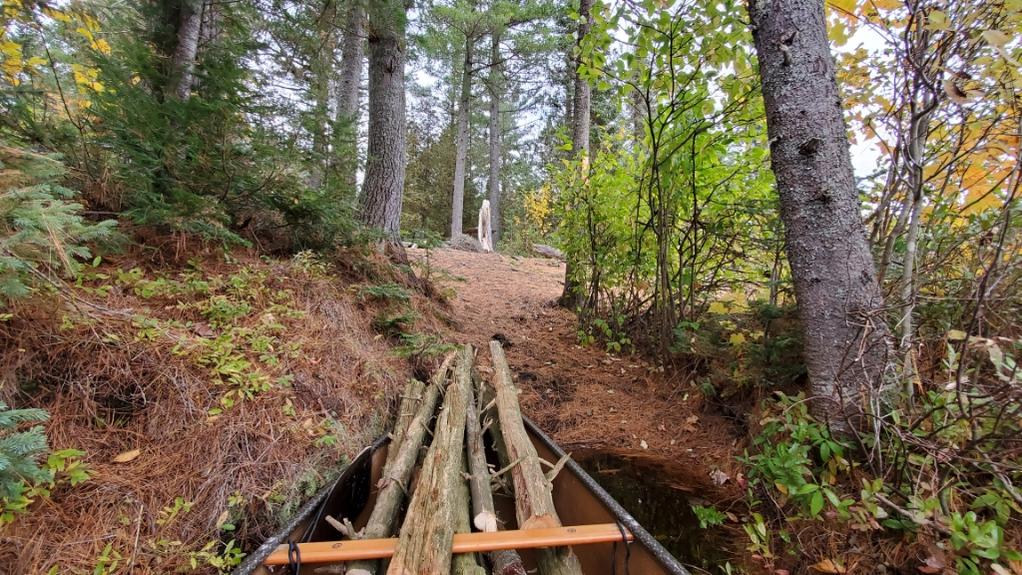 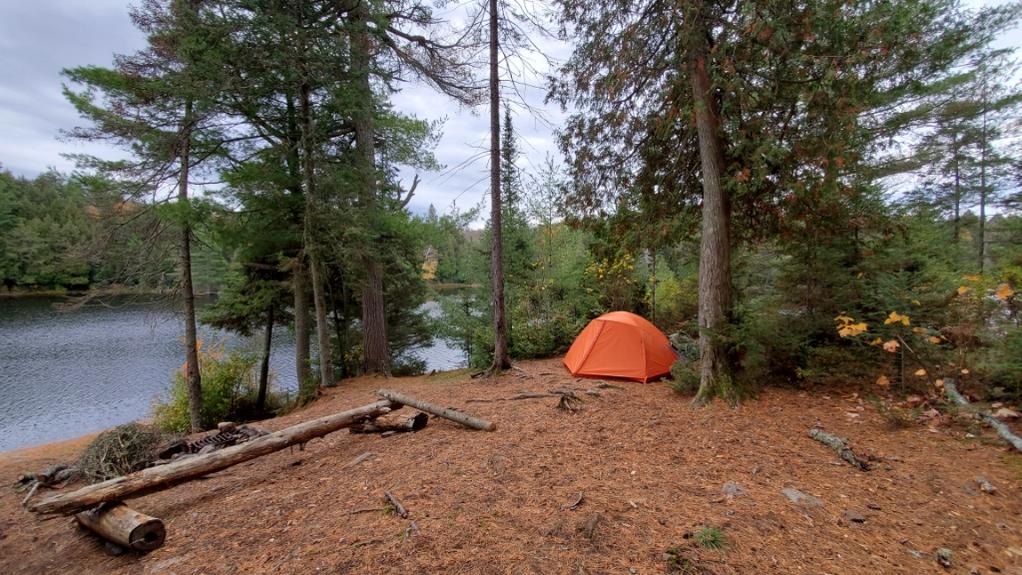 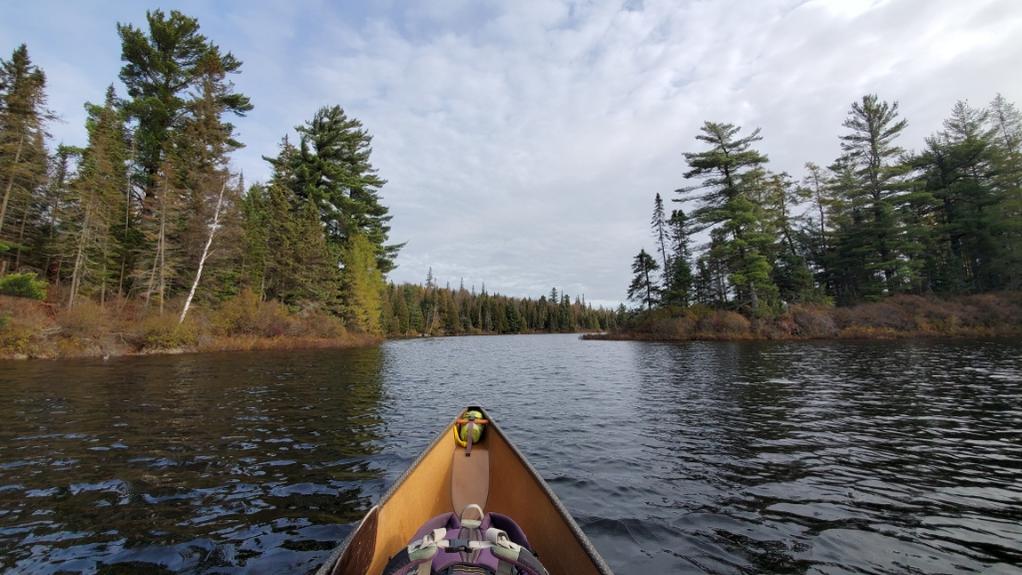 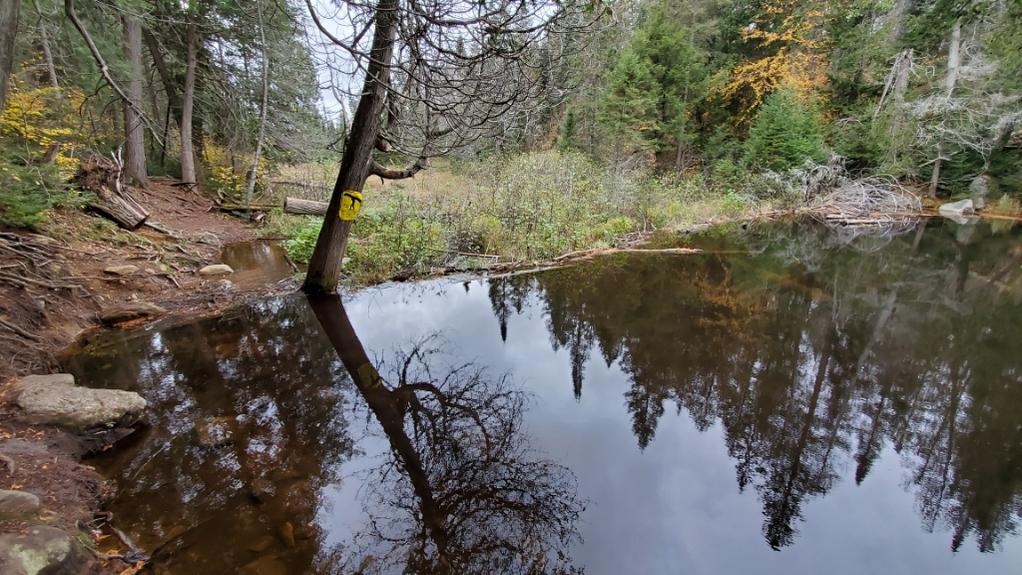 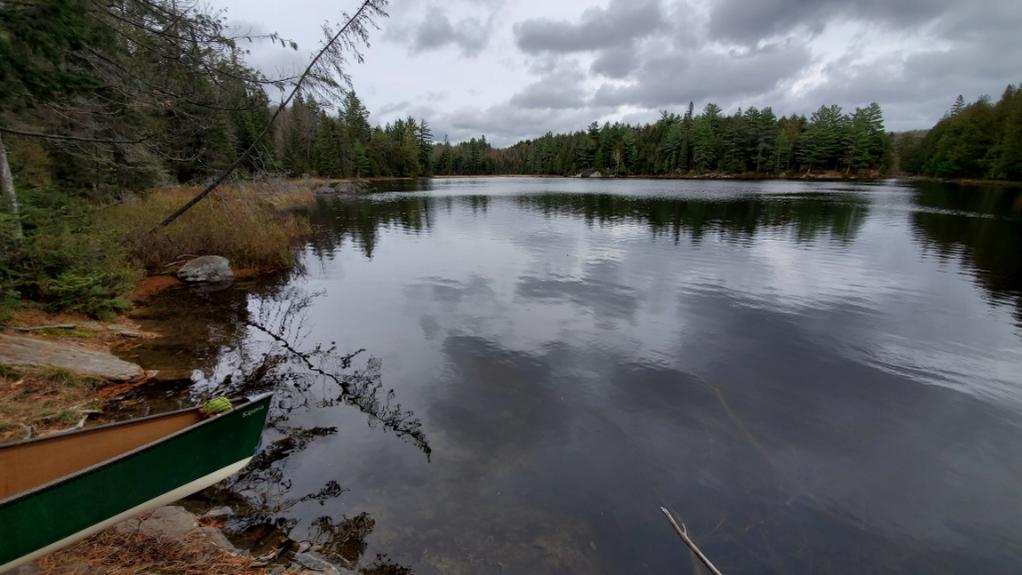 A new tent I picked up this year for solo tripping - the Marmot Catalyst 2. So far so good

I think I may have a problem. Despite returning from an 8-day solo trip just 3 days ago, the forecast for the Thanksgiving long weekend was just too good to pass up. With only a day’s notice, I reupped my loadout and was once again on the highway headed north to Algonquin. A friend of mine mentioned he was going to stay on Casey Lake for two nights, so I planned a route that would have me spend my last night on Casey. Of course, I didn’t tell him this, I wanted to see the confused look on his face when I paddled up to whichever site he was staying at. 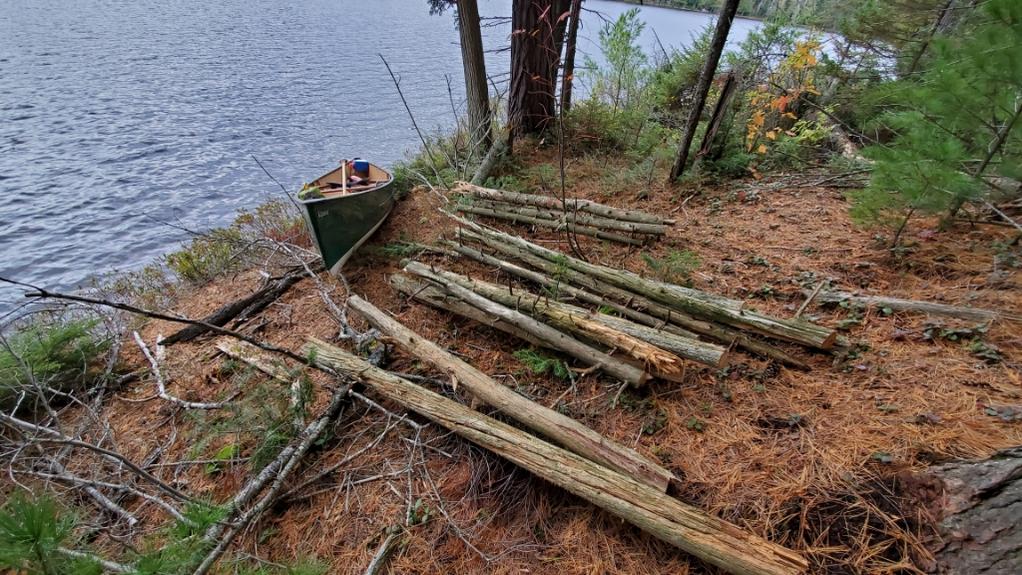 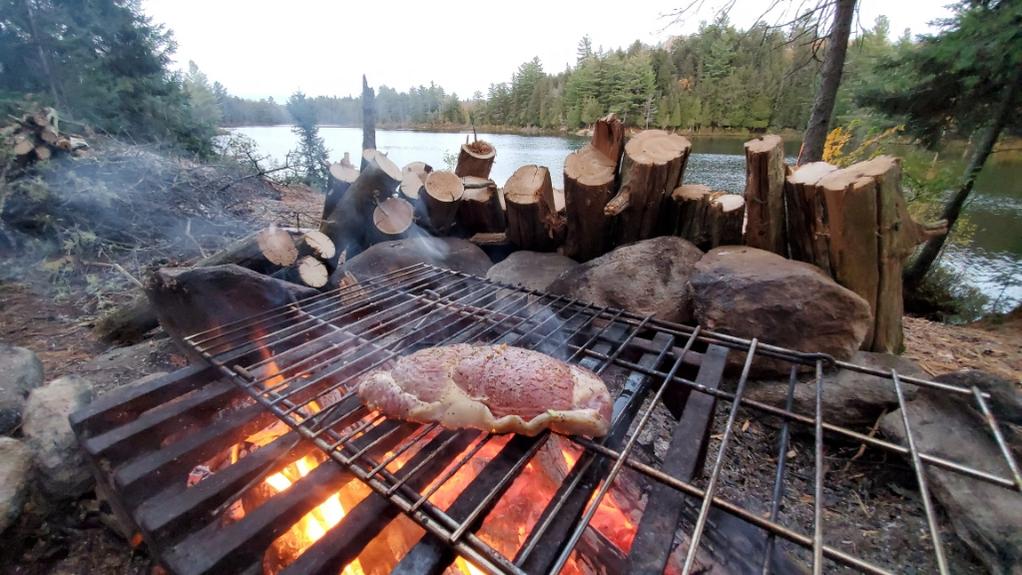 Back at camp and ready to relax 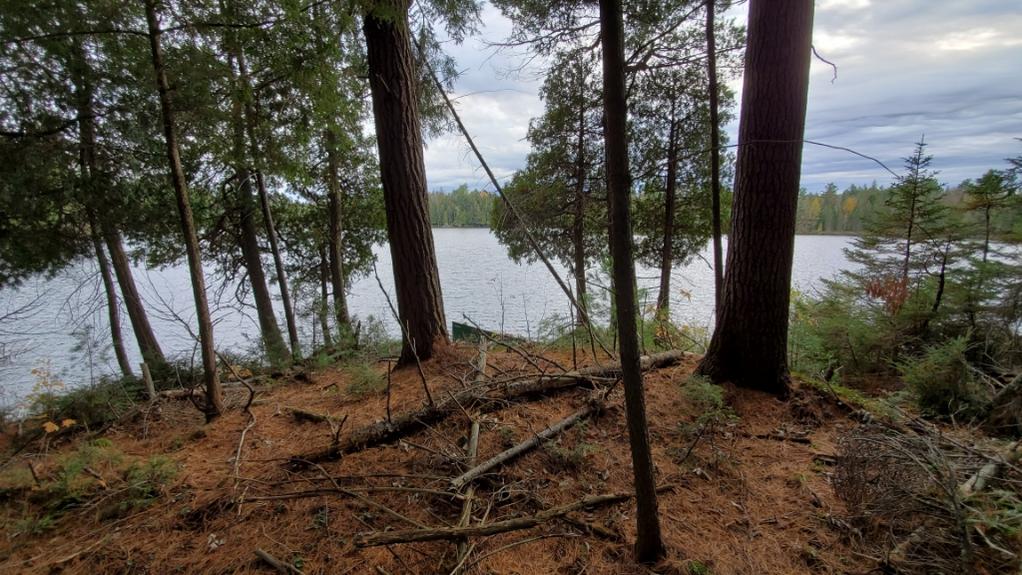 Beached at the take out for P450 (Jubilee to Juan) 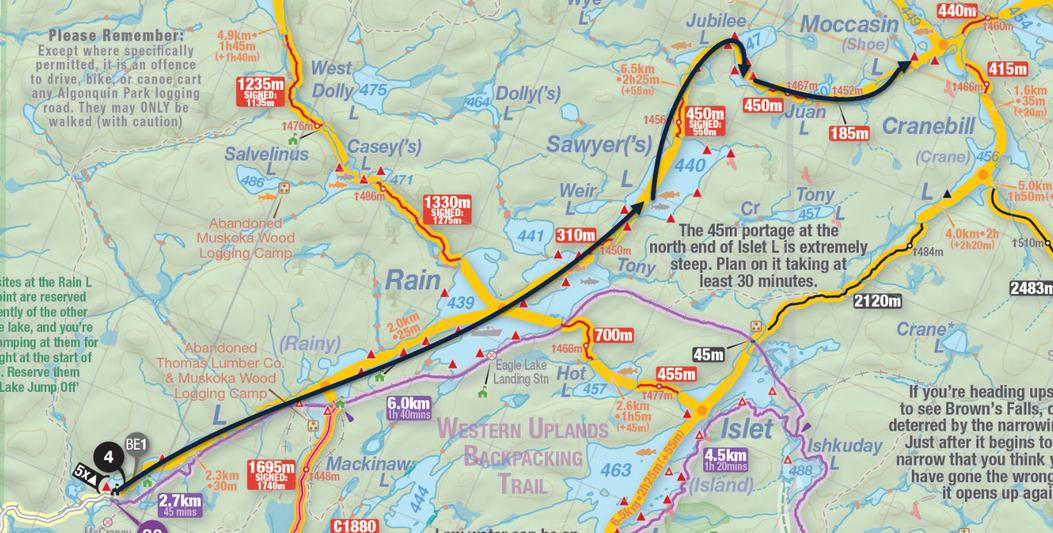 While still in the narrows, the clouds began to lift

Ready to launch from the Rain Lake access point. When solo I remove the bow & stern seats.

The view from my home for the night. Take note of the shoreline - remember this image

Looking back at Jubilee Lake from P450

Large beaver dam at the put-in to Jubilee Lake

Dry standing cedar makes for (some of) the best firewood 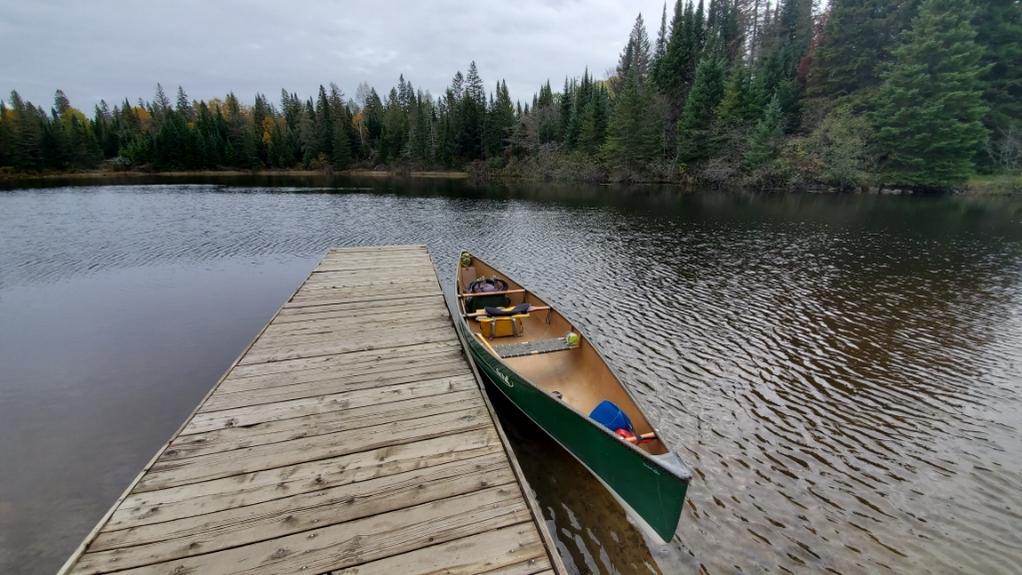 The weather was cool, but very calm. A tiny wind at my back to push me towards Sawyer Lake. I passed a couple of occupied campsites, waiving to the occupants. Everyone is always so happy to be out here, I love it! I took my time paddling up Rain lake and arrived at my first portage of the day by 11:20am. I had planned and packed for single carrying (my preferred way to travel) and made a quick crossing over to Sawyer Lake and eventually reached the portage to Jubilee.

I've been lucky to have a very slight tail-wind 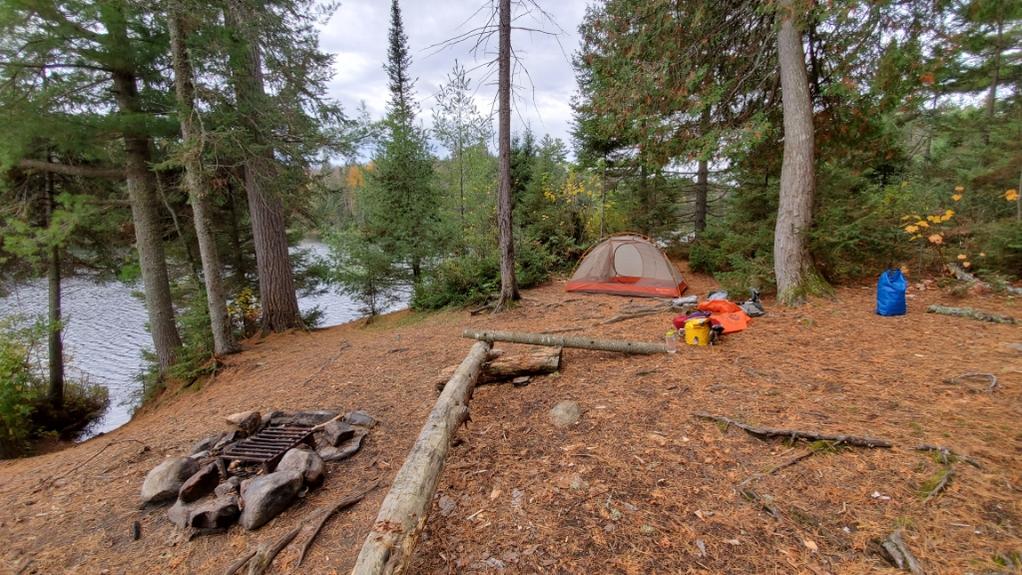 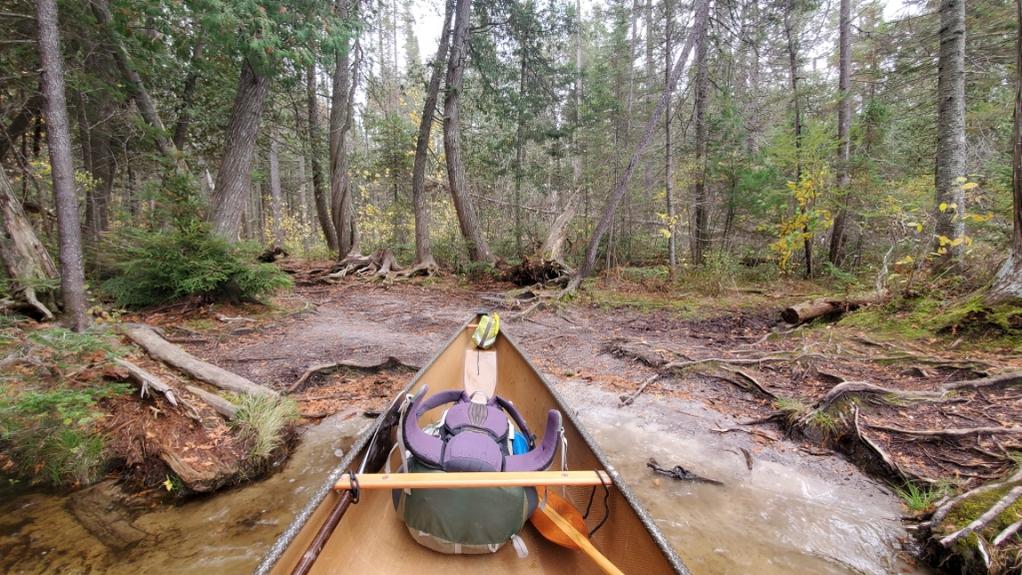 I spent some time gathering & cutting wood before loading it into my canoe and going back to my campsite. Once back at camp I poured myself a whiskey sour and began the task of cutting the logs to fire pit size. I was lucky on my forage for wood, I managed to find a ton of dry cedar. It was getting late in the day so I lit the fire to make dinner. Anyone who trips with me knows dinner on night one is always the same, and this trip was no exception. Steak, sauteed zucchini, bell pepper, onion with garlic and lemon pepper. You just can’t go wrong.

I wasted no time setting up camp and walked around the campsite looking for firewood – guess how much I found? I’ll give you a hint: bagel. No worries, this is expected when it’s late in the camping season and I have a little trick for these situations: Get in your canoe, paddle to ANY random spot that isn’t near a campsite, portage, or easy in/out. Guaranteed you’ll find plenty of dead, dry firewood just laying around the forest floor – and that’s exactly what happened. 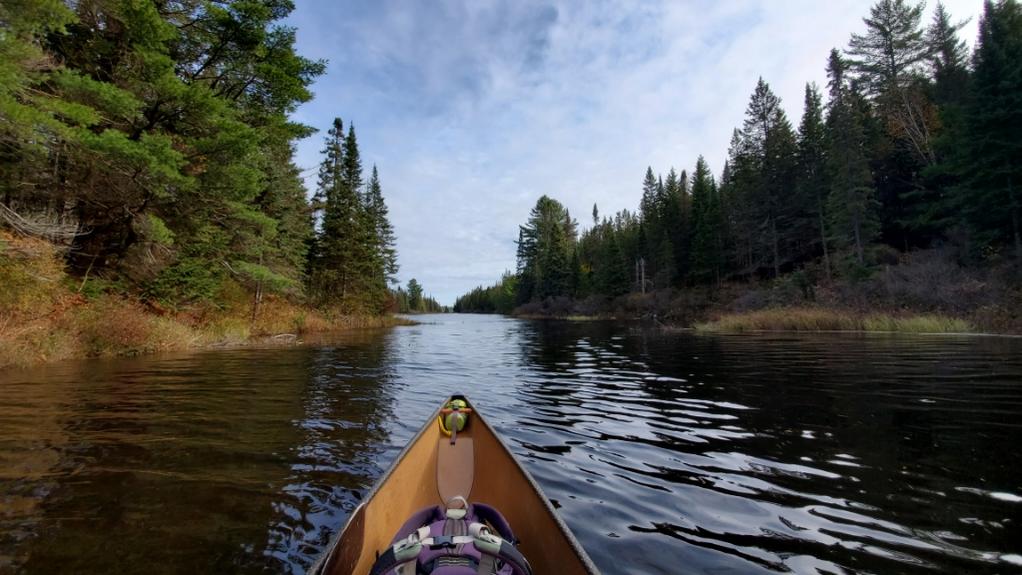 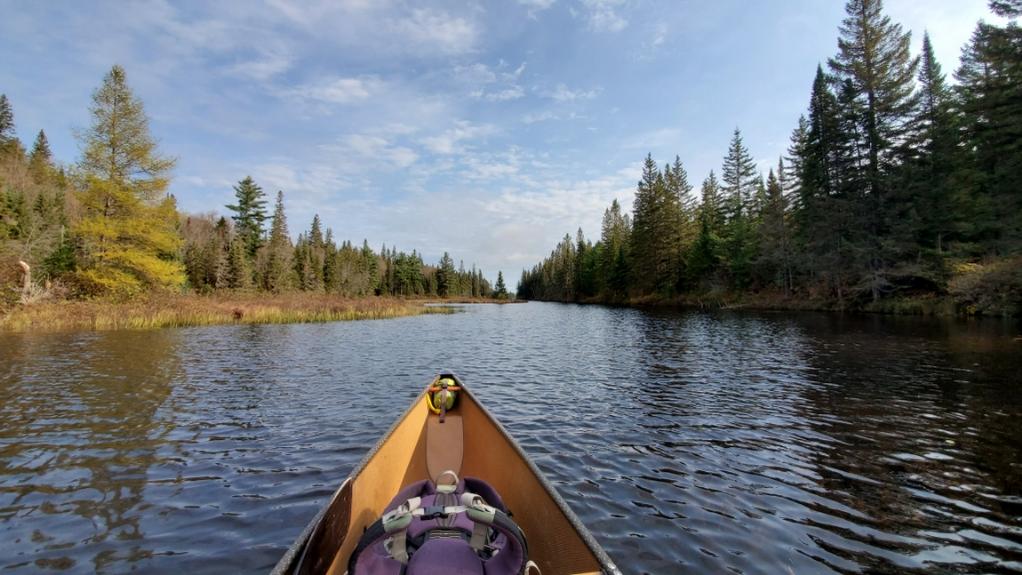 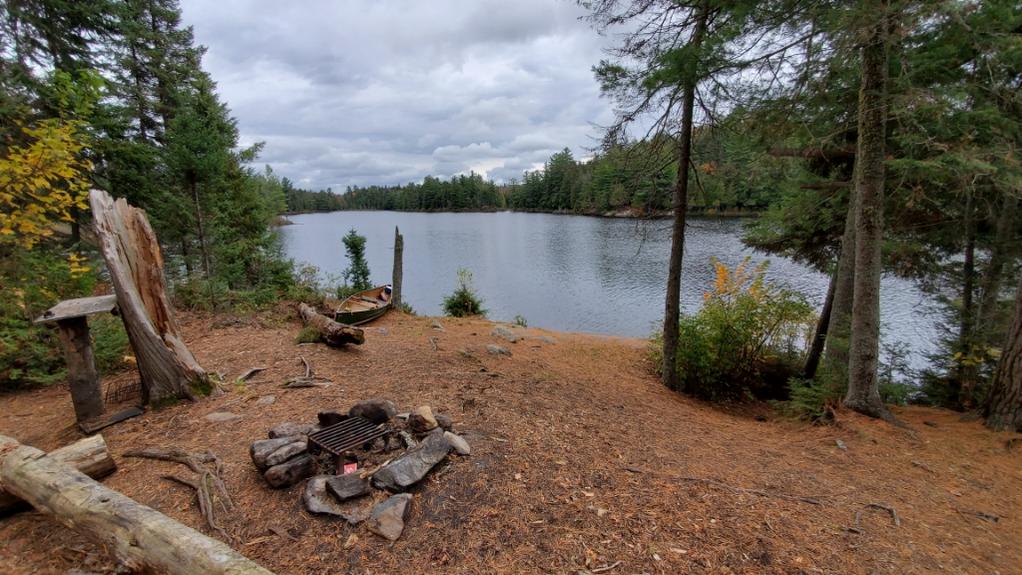 Jubilee caught me a little off guard. When I launched, the lake looked creepy as heck – but as I rounded some corners and saw the campsites, the lake kind of grew on me. Perhaps I’ll stay here one day, but not today. I crossed the trail to Juan and eventually reached my final portage of the day, a short walk to Moccasin Lake. Since I had the lake to myself, I checked out both campsites so I could make an informed choice. North shore wins – a decision that later could have cost me dearly.

Need firewood? Just land anywhere that isn't a campsite or a portage 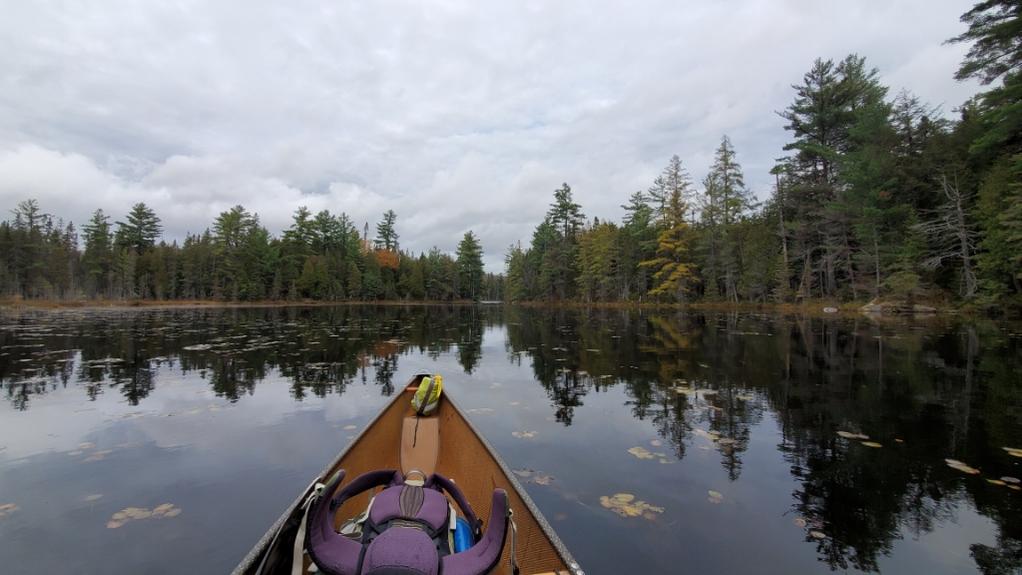 Steak on the grill - the fire might have been a little too hot for cooking, but it worked out 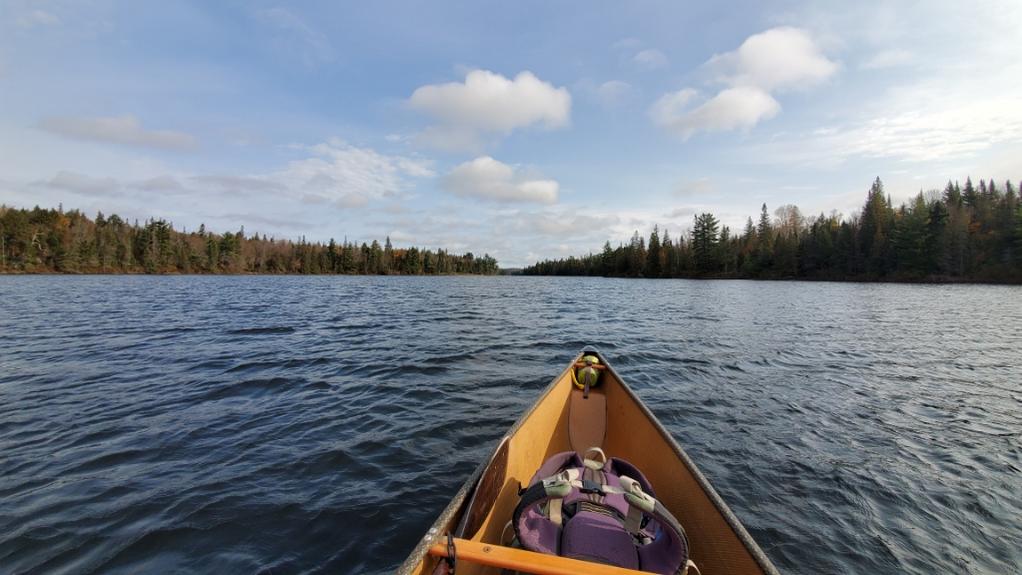 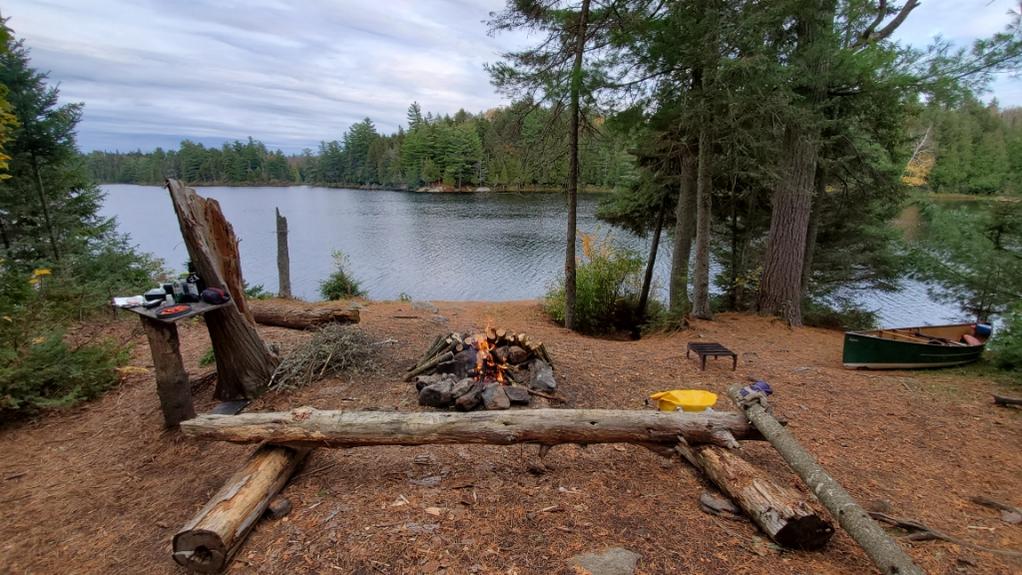