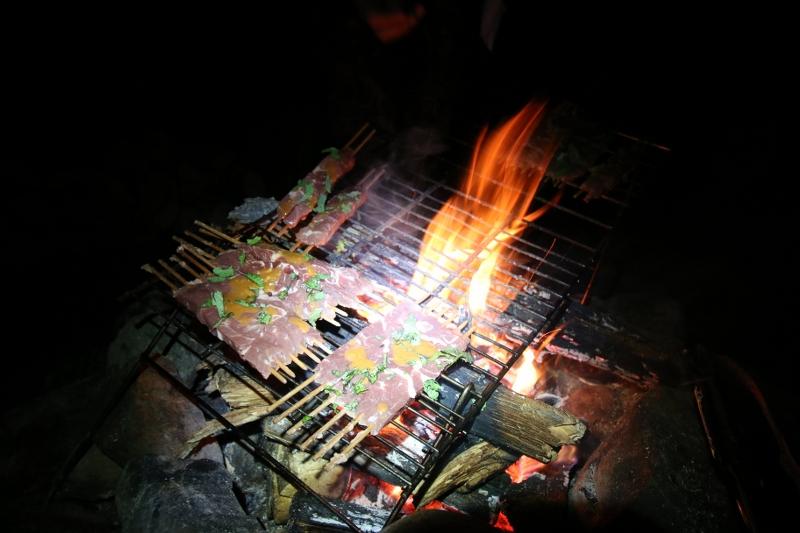 As we approached the mouth of the creek leading to the Shirley Lake portage I took my shoes and socks off in anticipation of having to do a bit of creek walking. Sure enough, it was required as the water was just too low to paddle. It wasn’t a problem and we were ready to make our first portage crossing by 1:30. We made quick work of the 1050m portage and launched onto a dead calm Shirley Lake. With no one in sight and with no wind, we were at the next trail leading to Ryan Lake in about 10 minutes or so. Once again, we loaded up for the 515m portage and made it across. This trail crosses a logging road and we’ve all seen those wooden ‘Road Crossing’ plank signs imbedded in the ground before the road but this time I took heed to its warning - I could hear the roar of a diesel engine. I stopped before crossing the road and let the truck pass. It was an empty flatbed – must have just dropped off some materials or whatnot to a nearby lumber camp. As we approached Ryan Lake I reminded Shane not to drink or touch the water as it was currently experiencing an algae-bloom which renders the water unsafe. A calm paddle down Ryan Lake and we stopped for a quick break in a bay before approaching the portage to Big Red Lake. Suddenly, for the 3rd time of the trip, I could hear a low-frequency buzzing or humming. First it was a plane, then a truck – now what? A motorboat. Yup. 3 for 3. A motorboat with two occupants passed us and approached the portage. I followed in tow, more out of curiosity of who they were and why they have a motorboat where there shouldn’t be one. Turns out it was two park rangers. After a quick chat, they told me they were headed up to Mudville Lake to try and locate the campsite. When I told them we were headed to the cabin, they said we were in luck as they just left a ton of wood behind. They grabbed their boat and motor and crossed the trail in a flash – must be nice when you don’t have a 50lb pack on your back. Shane and I loaded up for our 3rd trail of the day, a quick 230m portage into Big Red Lake. This trail may be short, but it’s very steep in the beginning and we sure felt it.

Permits secured, boat & gear loaded we launched at 12:45pm and began the journey to the cabin. It was overcast and cool – perfect weather for portaging! I estimated it would take us about five hours or so to make the journey. Six portages in total with one of them being fairly long - but nothing too troublesome. As we made our way under the bridge and into Crotch Lake, the whole area became dead silent. Ahhh, finally – the peace and tranquility of Algonquin Park. We continued along when suddenly I could hear a buzzing off in the distance. It grew louder and louder until eventually Shane said ‘Look!’ and pointed up. I looked up to see a massive 4-propeller aircraft flying super low and passing right over our heads! Wow! Why? Cool! Not 2 minutes later another one flew over, then another, and another. What the heck is going on here? Four low-flying aircraft in total flew over – pretty cool! Check out the video below.

After a couple hours the daylight began to fade and we figured we better get dinner going. Since we were staying at a cabin and didn’t need to bring a tent, we decided to bring more luxurious foods since weight wasn’t an issue. We had quite the menu prepared and tonight was no exception – skewers of lamb with basmati rice. Y.U.M. Dinner finished, our bellies full and the dishes complete. Next a couple after dinner drinks around the fire were in order. It wasn’t long before our early rise and daily efforts got the better of us, and we hit the sack shortly after 10pm.

Shall Lake to McKaskill Lake​

Day 1: Shall Lake to McKaskill Lake

Every fall since 2012 I like to spend a few nights at one of Algonquin’s old Ranger Cabins. Usually I visit the Crooked Chute or Lost Coin cabins, but for 2016 I wanted to return to an old favorite – the McKaskill Lake Cabin. Originally this was intended to be a solo trip, however my friend Shane told me he had some time off work and wanted to join. Given that Shane is one of my favorite people to canoe trip with, I was happy to have him come along.

At 7am on the nose I was at Shane’s door in Richmond Hill. We did a quick once-over on the gear then hit the road. Instead of taking Hwy’s 400 to 11 to 60, I decided to take the back roads near Peterborough. After what felt like forever (probably only a few hours) we arrived at the intersection of Major Lake Road and Hwy 60. Hungry, we stopped in at the little café in Madawaska and the owner whipped up a classic omelette sandwich with a side of bacon and potatoes. We took it to go and once again hit the road – I wanted to be at the access point by noon. The drive up the logging roads / access roads is always a thrill. It’s that point when you realize you’re going to be immersed in Algonquin for the next little while – and that’s just awesome. We finished our lunch on the road and eventually reached the permit office by 12:15. Shane was tasked with unloading the car while I secured the permits. There were a couple groups in the permit office waiting to start their respective trips – though they were all headed west to Booth, only Shane and I were headed east to McKaskill.

Looking west along the south shore of McKaskill Lake 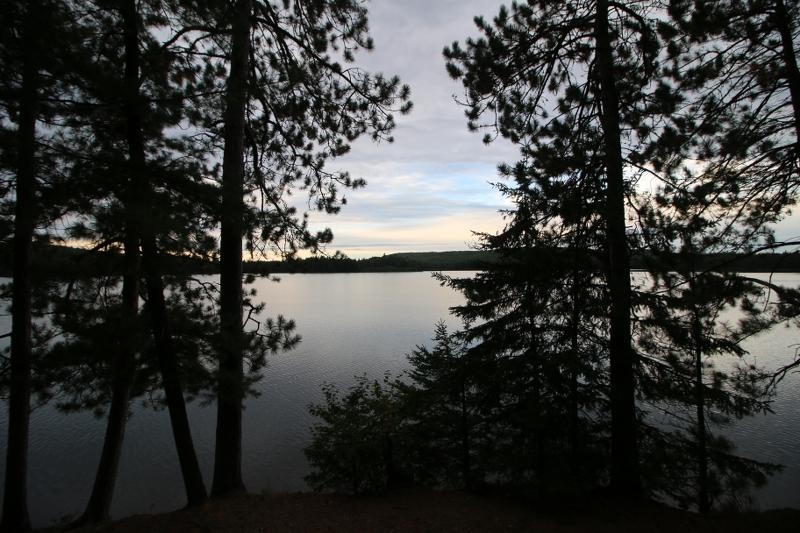 We launched on Big Red Lake at about 3pm and crossed it in a couple of minutes. I wanted to stop and poke around for the old lumber mill remains, but it was already 3pm and at this time of year daylight is over before 8pm – so I wanted to keep moving. We landed at the 545m portage to Shrew Lake and noticed a black back-pack was abandoned at the trailhead. I opened it up, found some fruit, a Nalgene of water (which was funny because for the first time I forgot my Nalgene at home) and finally – a park CB radio. Now knowing it belonged to the two rangers we had met previously, I opted not to take the much-needed Nalgene and instead hung the pack on a tree to make it obvious for them when they return – I’m not sure if they forgot it or left it behind intentionally – so I hung it in a conspicuous place. A quick crossing of the trail had us at Shrew Lake in no time.In less time than I remember, we crossed Shrew Lake and landed at our 5th and largest portage of the trip – a 2420m trail that snakes and winds its way through the Algonquin forest. It’s not a particularly hard trail, it just feels way longer than it actually is. Before we started down the trail we spied the two rangers in their boat headed back from Mudville across Shrew Lake to the Big Red portage. We waved them off and made our way down the trail. On the previous trails, we would just swap taking the canoe every other portage. For this one we would take the canoe as long as we could, then swap out by placing the nose on the ground and switching positions. This enabled us to make the crossing without stopping for breaks – or so we thought. After a long time and many switches, we stopped for a quick rest. I decided to pull out the GPS only to learn we stopped less than 100m from the end. We took our break anyway. Re-energized we completed the trail and launched onto Dove Lake. There is a tiny, 40m portage connecting Dove to McKaskill and on older maps there is an indication that no such portage is required – there is an outlet just south of the trail. Just take the portage – trust me. I don’t know where the ‘outlet’ is, but I do know where there is a log-jammed section and the difference in water levels between the two bodies is a couple feet – so I really don’t know how or when this 40m portage would be avoidable.

​There was a ton of dead wood at the McKaskill end of the 40m portage so we spent a few minutes collecting as much as we could – it was already after 5pm and we figured wood would be scarce near the cabin, due to it being the end of the season. The boat was over-loaded with fire wood and we made the final crossing of the day finally arriving at our new home for the next 5 days – the McKaskill Lake Cabin. 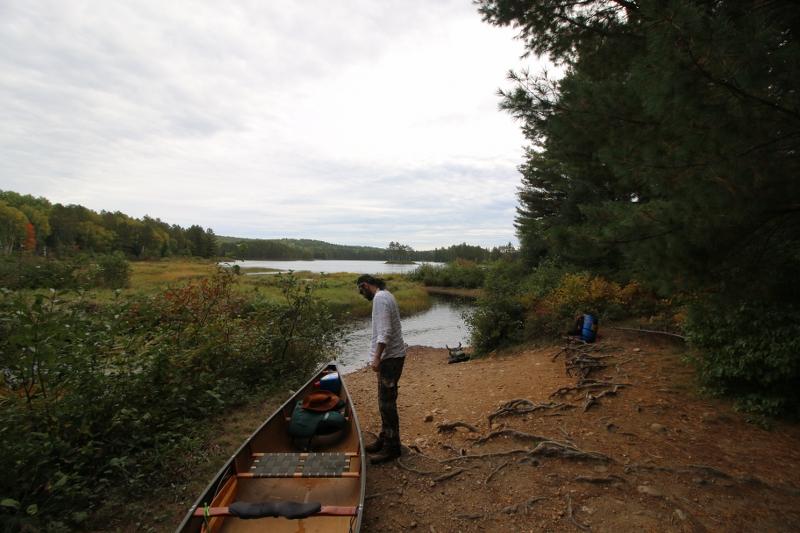 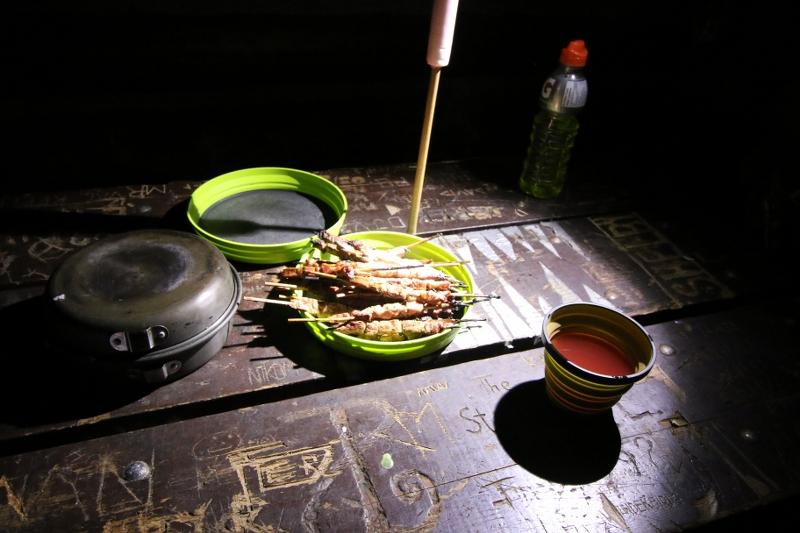 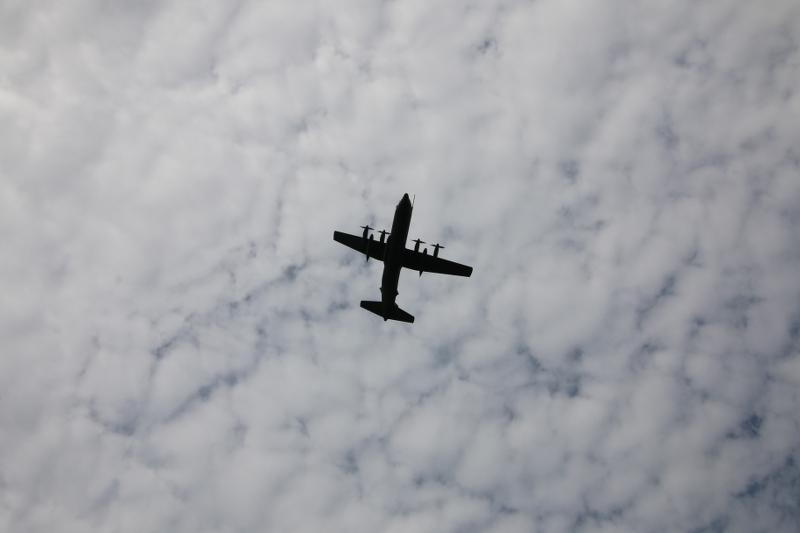 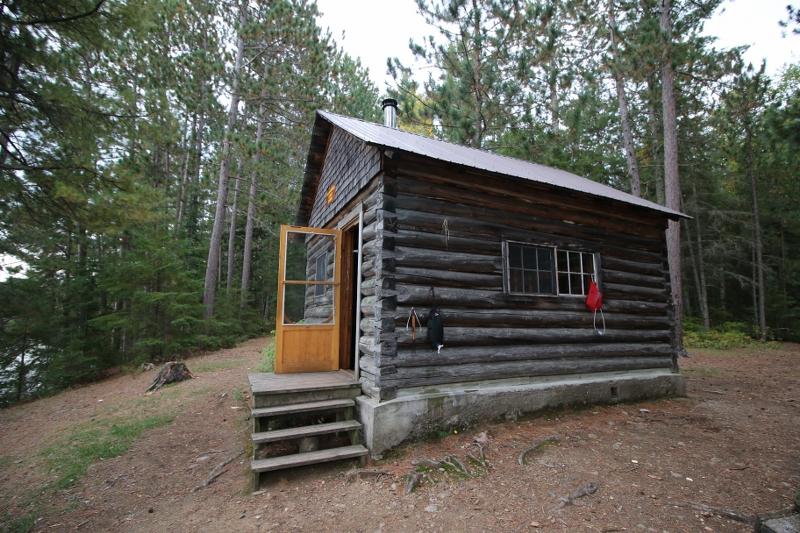 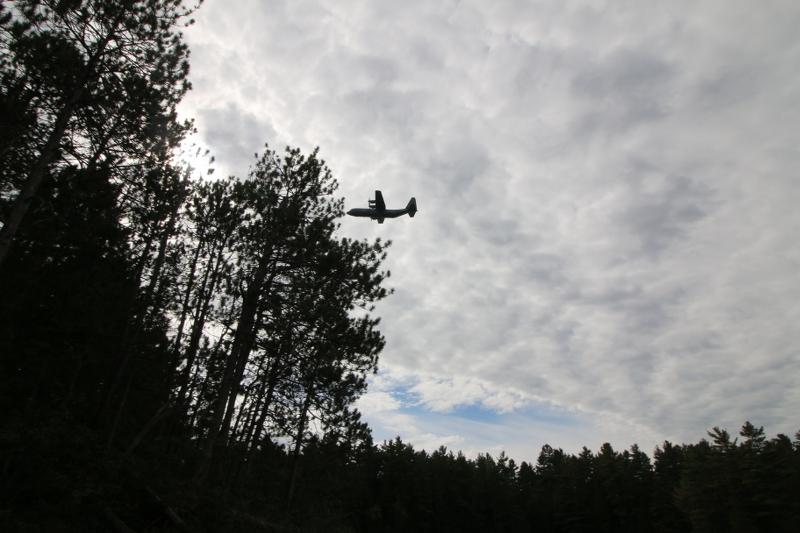 Fresh lamb skewers, a pot of basmati rice, washed down with some whiskey sours 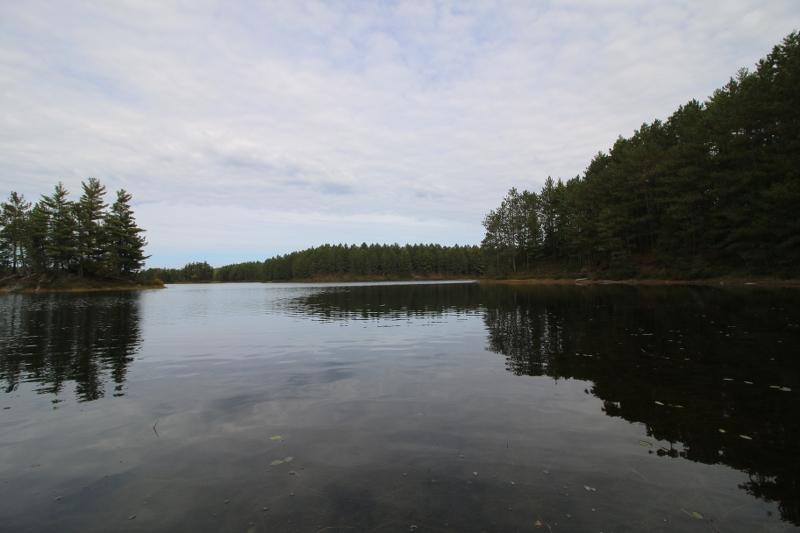 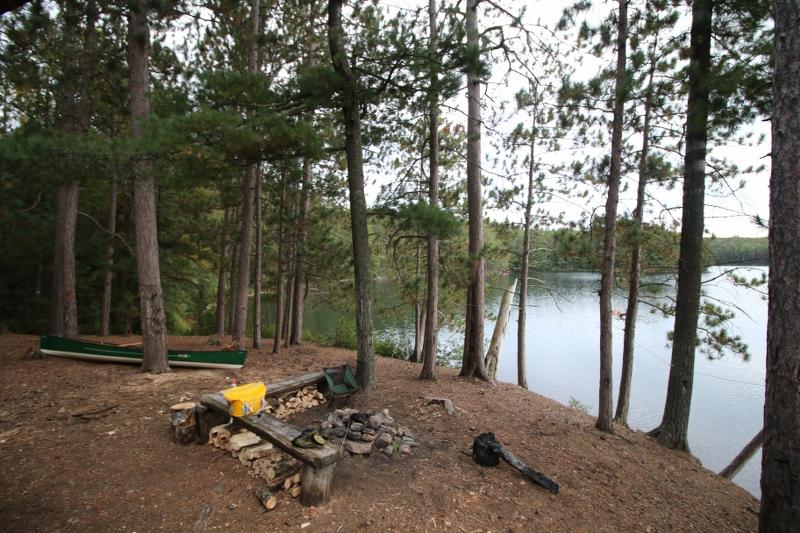 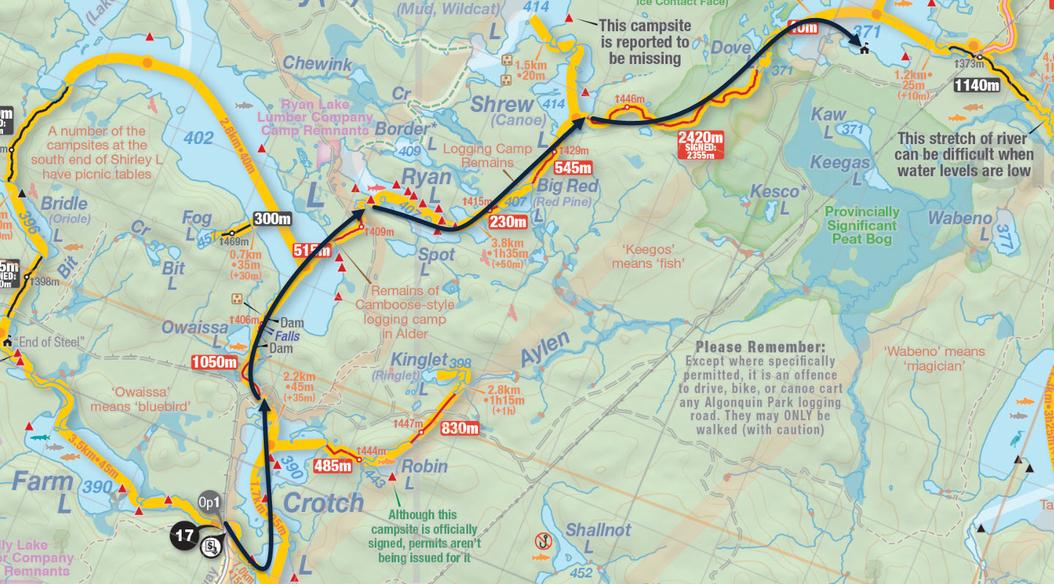 Looking north from the cabin - McKaskill really is a beautiful lake

We sure lucked out! Just as the rangers had said there was a ton of pre-bucked firewood ready and waiting for us. The cabin looked to be in good shape – clean and fresh! I was so happy to finally be here. Considering it was late in the day and we didn’t need to forage for firewood, we both decided it was time to celebrate our success with a drink, or two. We sat outside by the pit, no fire going yet – just enjoying our drinks and recalling the ups and downs of our many previous trips. Shane and I did White Partridge Creek back in 2014 and we laugh every time we recant the story. 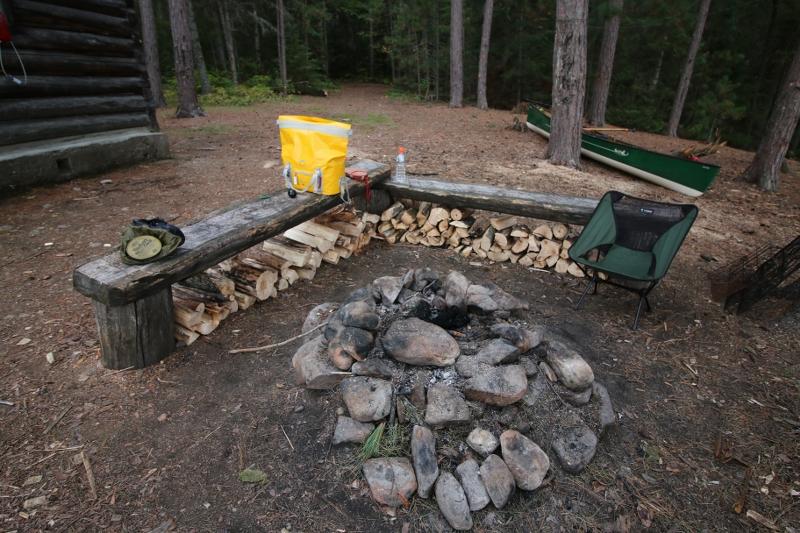