One of several beaver lodges along the Crow River 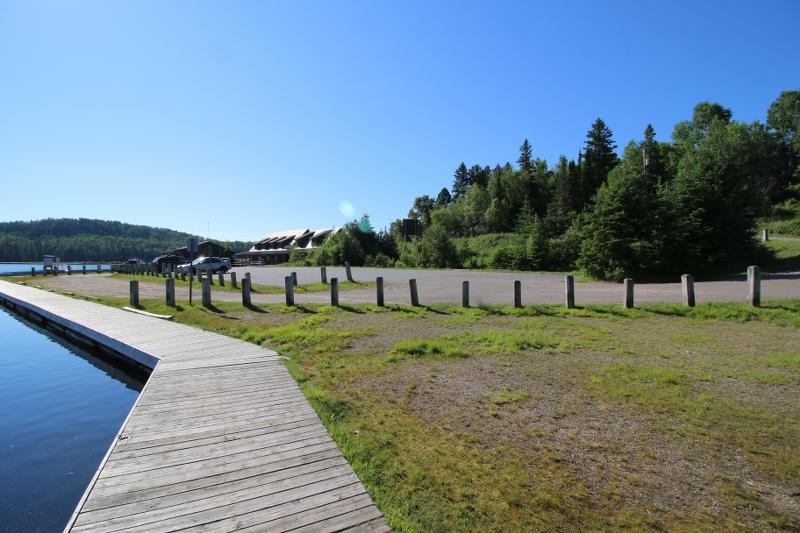 After a long day of paddling in the sun and drinking in the shade we finally became hungry enough to get dinner started. On the menu tonight was steak, grilled zucchini and peppers – a traditional first Algonquin meal. Dinner was thoroughly enjoyed and once the dishes were done we went behind the campsite to hang the food for the night. A few more logs on the fire, a few more drinks in our cups and eventually off to bed – we were both pooped from the lack of sleep the night before, and the 34km journey to this campsite of course. 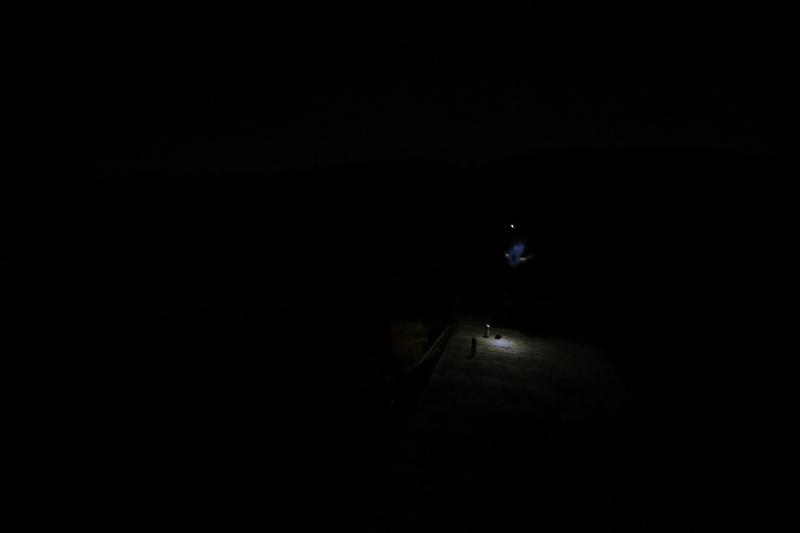 By 2pm we were at Proulx Lake and took another 20-minute break before shoving off. It was very hot out and I felt the sun wearing me down a bit. Although there was a breeze in the air, there were no waves or resistance on Proulx Lake and it didn’t take very long to make the crossing. Around 45 minutes after launching on the lake we were at the mouth of the Crow River. I mentioned to Ty that this river is a moose hot spot and we would probably see a few before the day is over. Unfortunately, I had to eat my words because the only wildlife we saw on the river was a nesting loon. The loon sighting was actually pretty cool because you don’t see them on land very often – and when you do see this, you can really appreciate how large they are. We continued on without any moose sightings and before we knew it we were almost at Little Crow Lake.

Taking a short break along the Crow River 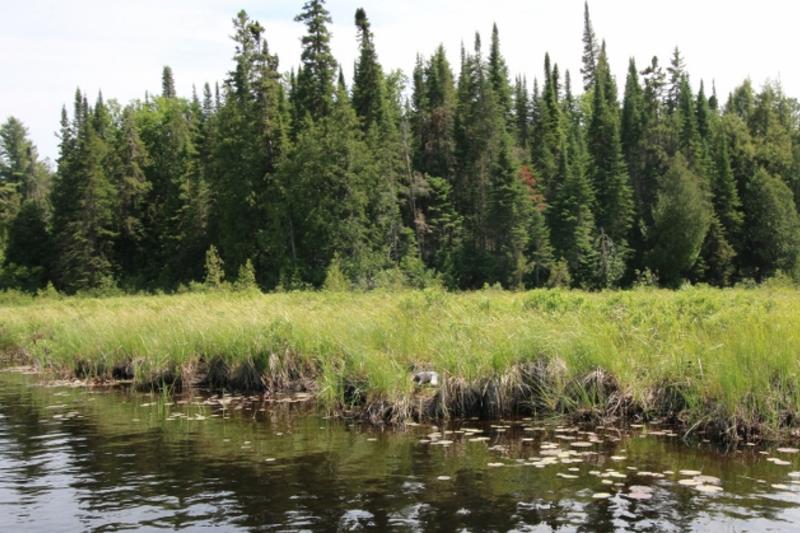 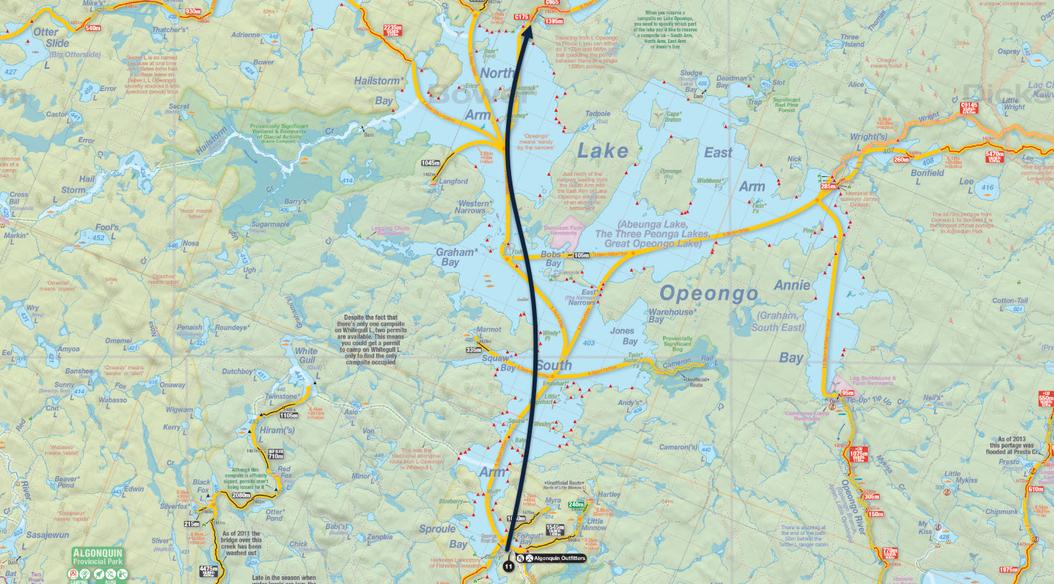 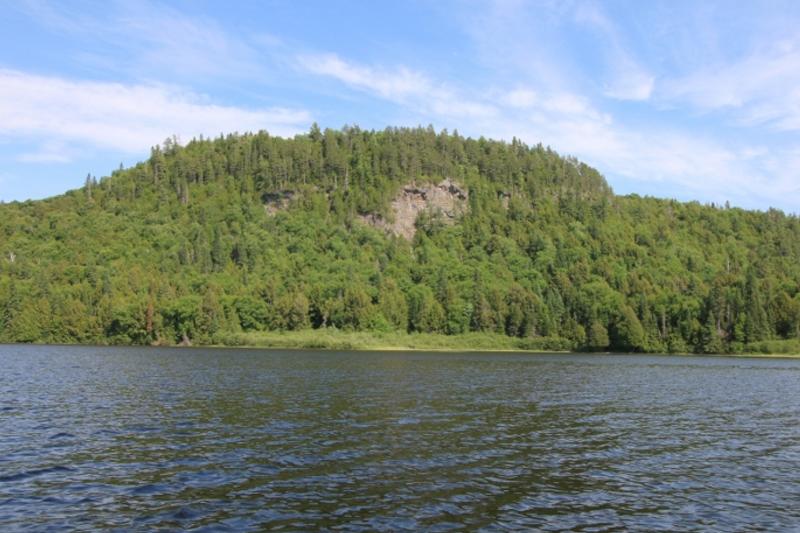 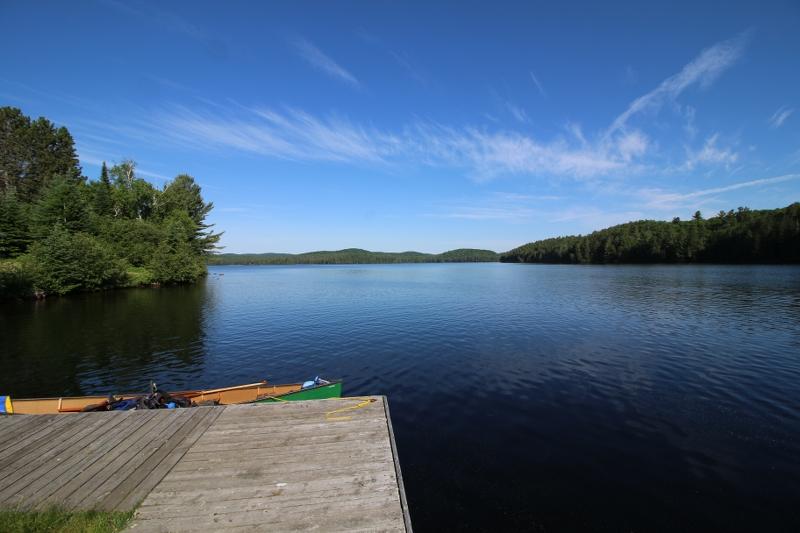 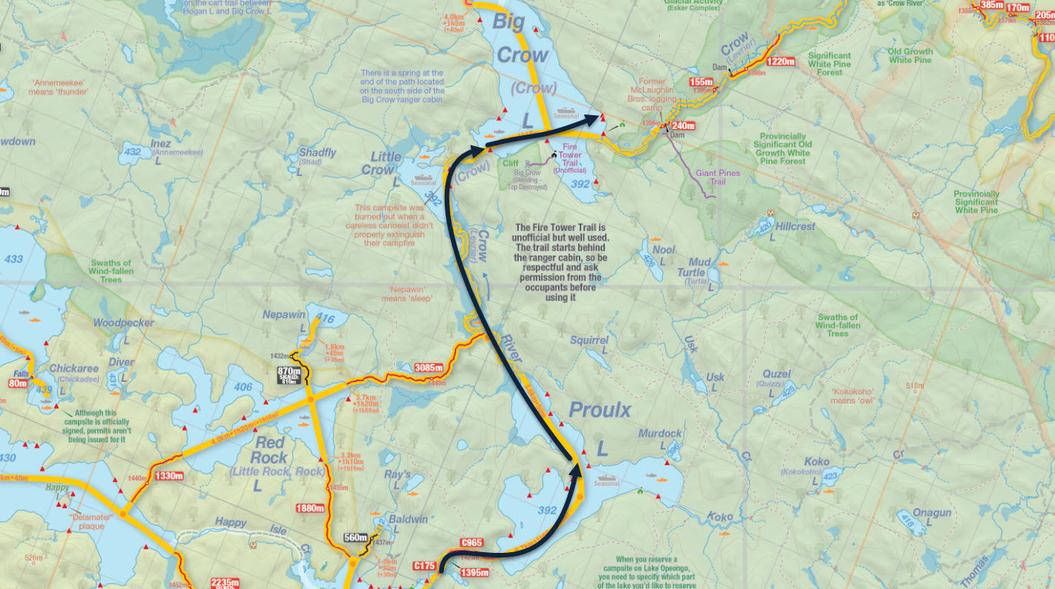 Though its hard to see clearly, there is a nesting loon front & center

Another crew embarking on an Algonquin Park adventure

Algonquin Park isn't busy during high-bug season - all the more reason to camp in June!

I was disappointed because it was really hot and I wanted to go for a swim – no mega worries though, a buddy of mine told me there is another great beach campsite just a couple hundred meters up the east shore from this one. We paddled over to it and my buddy was right – it was a fantastic campsite. The only problem was the westerly winds have blown all the pollen into the little bay where our beach was – there was no way I was swimming in that stuff – it was just too thick you’d have no idea what’s around you. It was now 5pm and we were both tired from a very long travel day – shy of 33 kms. We were both very thirsty so while I set up the tent, Ty grabbed a bucket of pollen-free water and sat by the bench to pump both Nalgene’s. Then something funny happened – Ty said he had a strange feeling that he was being watched and decided to look up from the ground.  Just across the campsite – not 50 feet away was a giant bull moose staring directly at him and giving him the old stink eye. I wonder how long he was standing there, observing us.

We both watched in awe and silence as the moose checked us out, then slowly retreated back into the forest from which he came. I guess we weren’t skunked for moose after all – a cow stuck in the mud and a bull giving us the stink-eye. With the camp chores complete there wasn’t much left to do but make dinner and have a few drinks. Neither of us were hungry yet so we threw a bunch of logs on the fire and kept drinking until it was time for dinner. Unfortunately, due to the booze – the prospect of hiking up the fire tower trail was now off the table. I felt kind of silly trading an amazing view for being buzzed, but that wasn’t our intent – we just kept drinking and chatting at the fire. We both kept checking behind our back, just in case Mr. Stink Eye decided to make another appearance – he did not.

Little Crow Lake is a pretty non-descript lake and I would only camp here if I had to – I could be wrong but the campsites don’t look very appealing from the water. As we emerged onto the lake, we kept close to the east shoreline and I pointed to the burnt-out campsite. I said to Ty, ‘We can’t ever be THOSE guys.’ He laughed but agreed. While passing the last site on Little Crow we were greeted by a cute but mouthy dog who was giving us the business. I am fully a dog person, love them and have a Husky of my own (Farley!) – but for the life of me I can’t understand why the owner didn’t at least TRY and hush or control the dog – he barked the entire ten minutes it took us to get out of sight. It wasn’t a huge bother, but I was perplexed at no effort given to mitigate the situation. Ah well, he was still cute, just annoying. By 4:15 pm we were in the narrows between Little and Big Crow Lakes – still no moose. When we finally reached Big Crow Lake and came within view of the cliffs we saw a peculiar sight – a female moose right below the cliffs, stuck in the mud. She was managing okay, but she was really stuck! I joked to Ty, ‘Maybe she jumped off the cliff and got stuck in the mud.’ We laughed and continued on. I told him there was a fire tower and a trail up above that cliff – we agreed that if we had the energy later today, we would hike the trail and take in the view. Our targeted campsite was the beautiful beach site where the Crow River exits the lake. I had stayed here for a couple nights a few years ago (See TR 5) and I really liked the campsite. When the beach came into view, neither of us could see any canoes, tents or people so we b-lined for the beach. Then, just as it happened a couple years ago when I was trying to get this exact campsite, a person came down from the site and walked along the beach – perhaps he noticed we were headed right for his site and came down for us to see it was occupied.

Awake at 7:30am and a little hungover from our unplanned campsite party.  We skipped coffee and breakfast to be packed up by the time the permit office opened (I thought it opens at 8am, turns out it opens at 7am). At about half past 8 we made the quick paddle back over to the dock and Ty went in for the permits while I hit up the Opeongo store for some much-needed Gatorade and snacks. I told Ty to make sure he informed the permit office staff that we spent the night at a campsite, so they could collect the appropriate fees. With the logistics, out of the way we launched onto a breezy Opeongo Lake at 9:20am.

Our campsite on Big Crow Lake 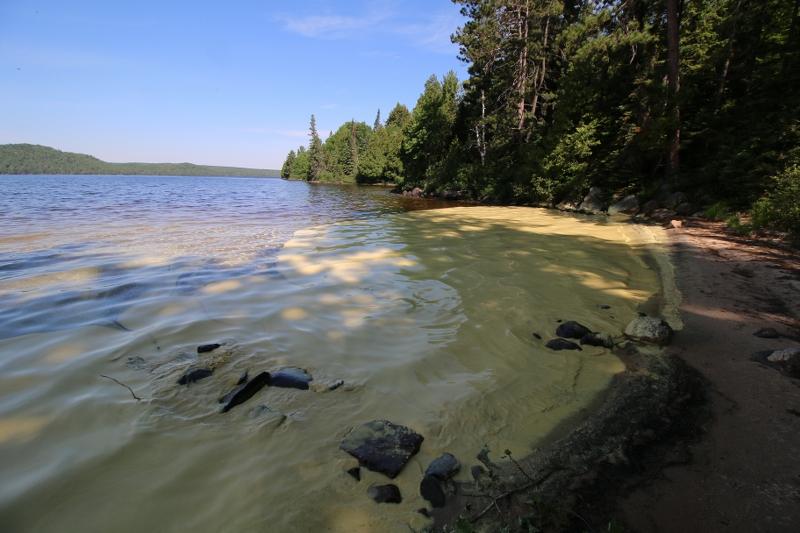 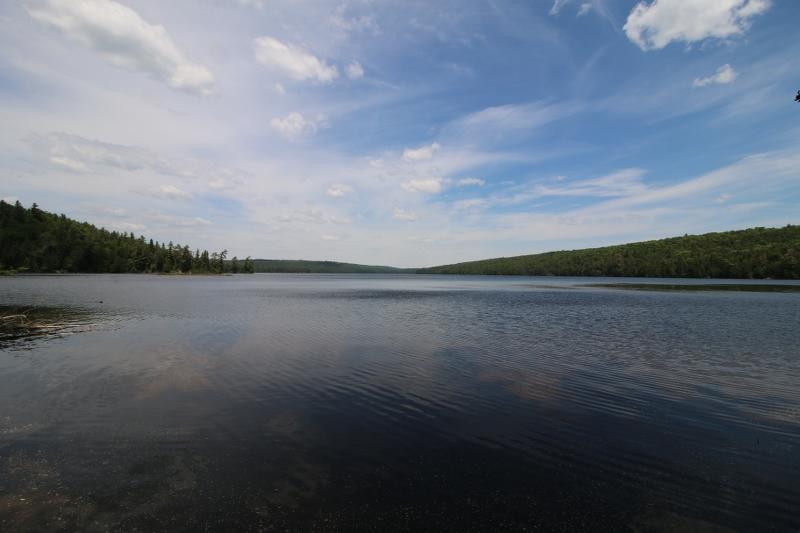 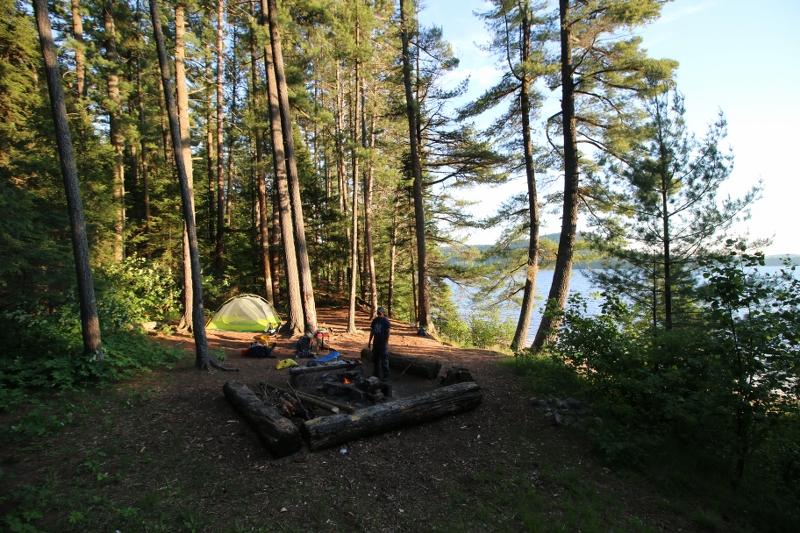 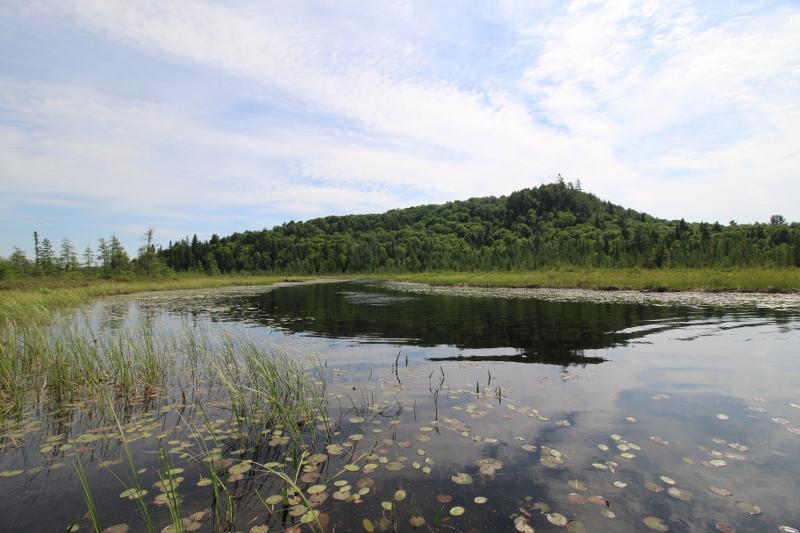 Looking out over Proulx Lake from P1395 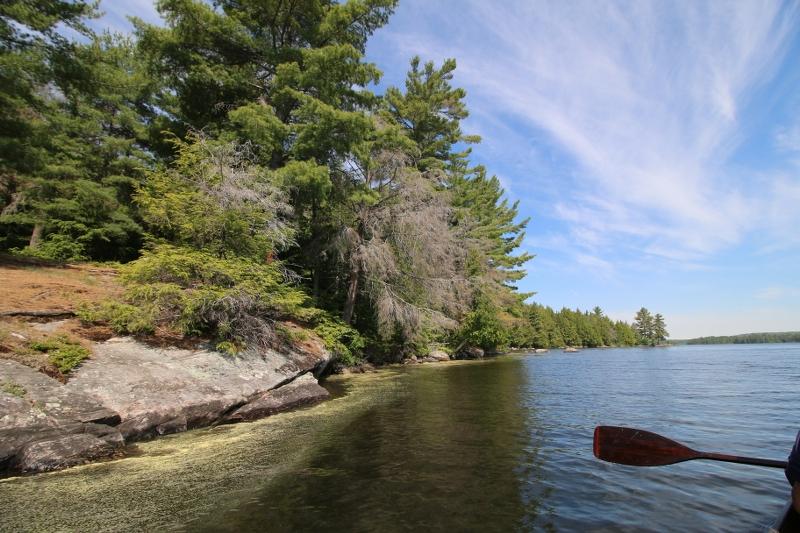 Day 0: Opeongo Dock to Just across the bay

Every June for the past few years my friend Tyrone and I would embark on what we call ‘The Summer Solstice Trip’ – which is an Algonquin Park canoe trip taking place during the longest days of the year and to celebrate the first day of summer. This year, we wanted to add a bit of a challenge to it, so we decided to try and travel 100kms over 3 travel days (4 days total, including an off day). I planned our route so that measured out to be 85km point to point – but after so many canoe trips I've learned to add about 10 to 15% to each day to get a more accurate estimate for true travel distances. That puts us at about 92 to 95kms – no problem, a short-day trip can take care of the extra 5 to 7kms we needed to reach our goal of 100. The route was simple: Paddle Opeongo up to Big Crow Lake for the first night, then over to Lavieille for the next two nights and leave from Lavieille on the morning of day 4.

I finished work at the usual time of 5pm and Ty was already waiting outside my office to pick me up. We wanted to get a jump start on the trip so we decided to drive up tonight instead of early tomorrow morning. We arrived at Opeongo around 11pm, the lake was dead calm and the moon was out. If I could’ve grabbed my permits right there and then I would have and got at least half way up Opeongo while it was so calm. We decided to have a little fun, so instead of camping on the geese-poop covered grass at the Opeongo docks, we took a short moonlit paddle over to a nearby campsite across the bay and made camp. A small fire, a few drinks and the tent set up - we hit the sack by 1am. This trip was already turning out to be awesome – it just became a four-night adventure instead of three!

The pollen pretty much rendered the beach useless

Again, it's hard to see but front & center there is a cow moose stuck in the mud

Looking north from the Opeongo Dock - when Opeongo is this calm, you get your ass in gear and go! 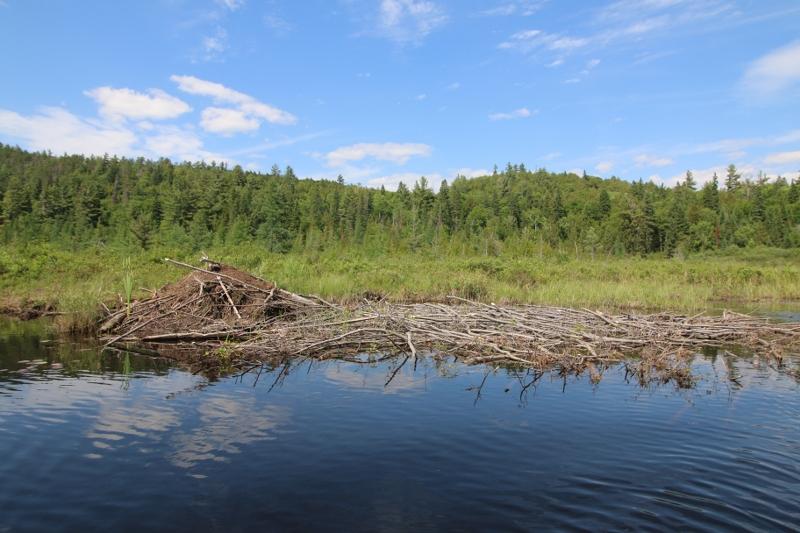 The sky was blue and I hoped we could get to the north end of Opeongo before the wind kicks up – this lake is notorious for high winds. We paddled consistently through the South Arm and after nearly two hours we were at the narrows leading into the North Arm. We took a break at a big rock on a small island and had a quick lunch (breakfast?) – Salami sandwiches with mustard on bagels. The sandwiches hit the spot and we continued on through the narrows and into the North Arm. After another 45 minutes of paddling we finally landed at P1395 to Proulx Lake. Our original plan was to single carry all portages on this trip but due to a few extra luxury food and drink items planned for night one – we decided to double carry our only portage of the day. Before headed down the trail, we took a 20-minute break on the dock before continuing on. The double carry turned out to be a wise decision and didn’t take very long, just under an hour. 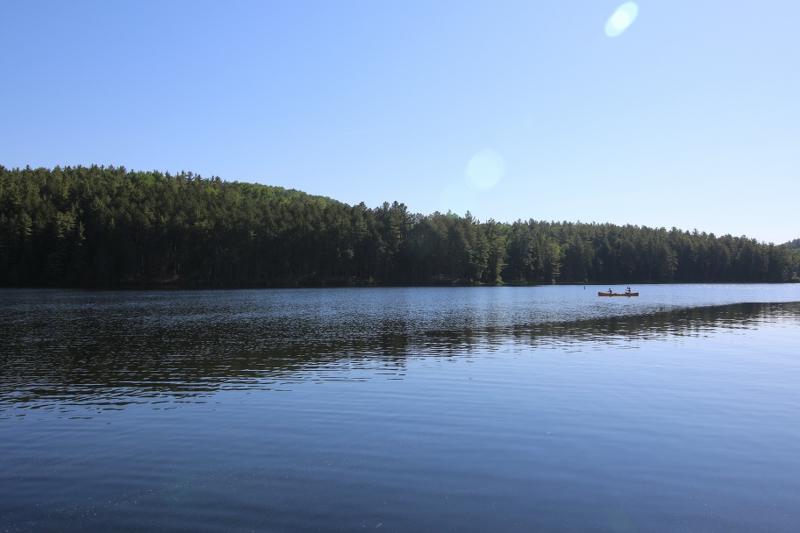 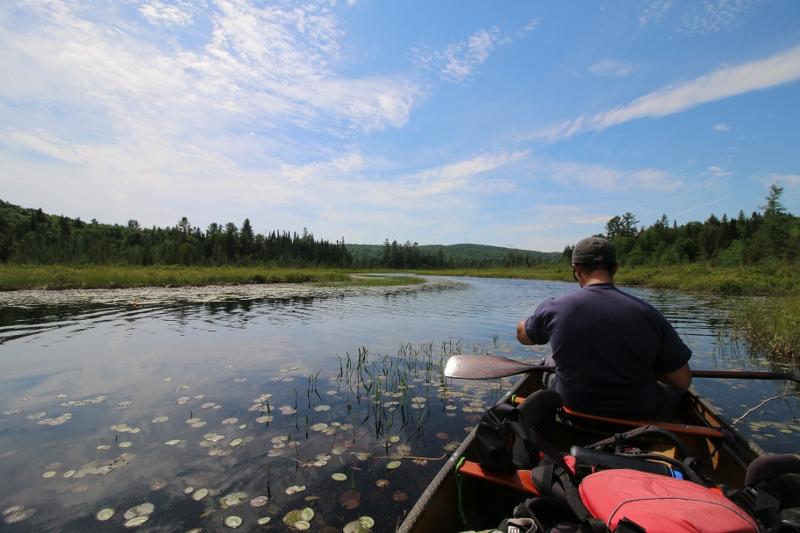