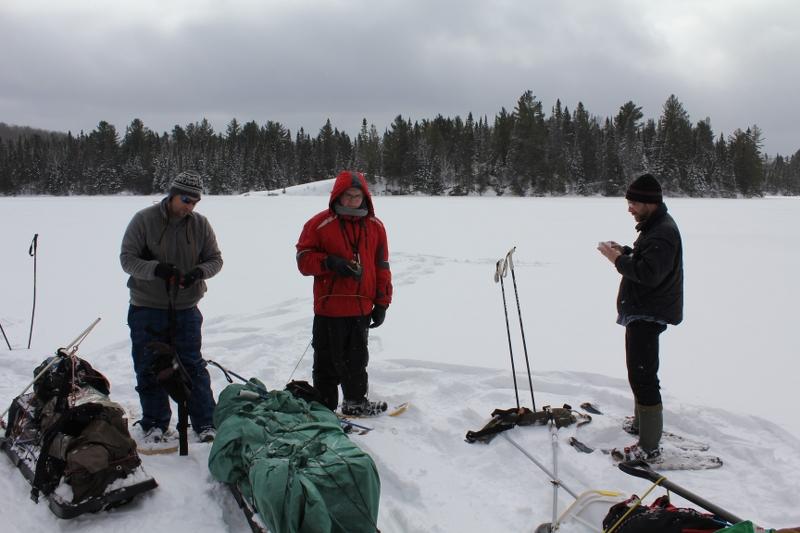 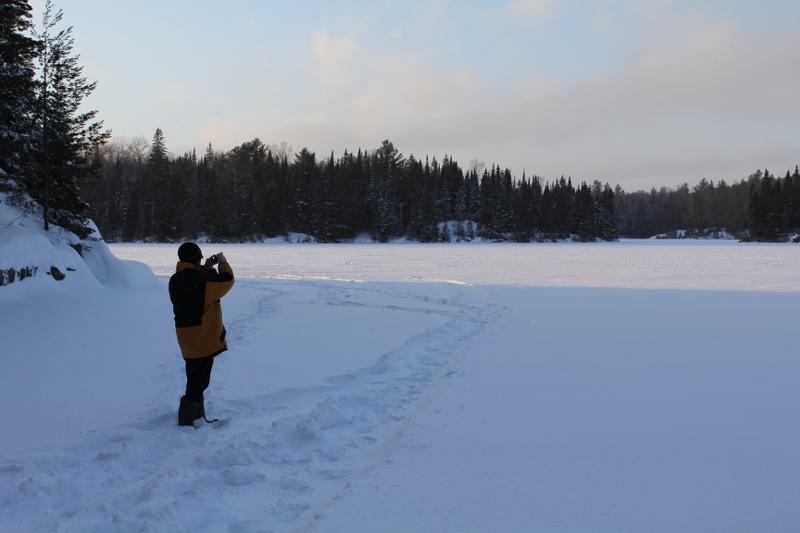 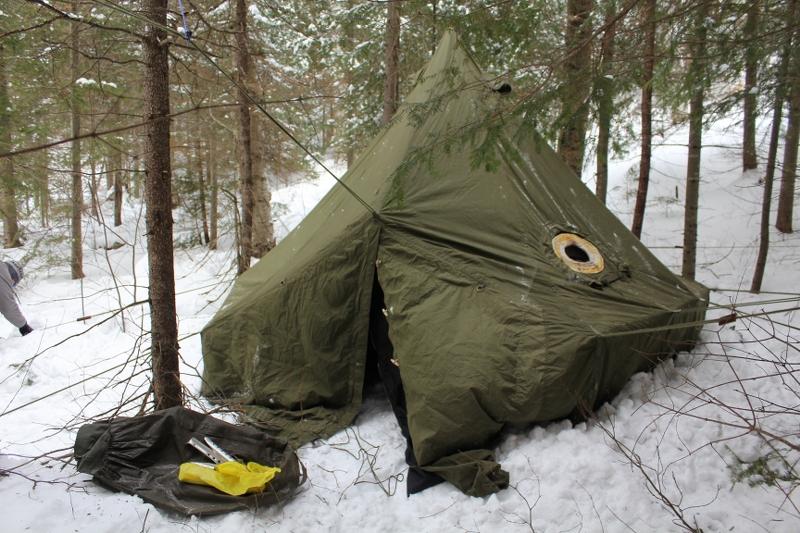 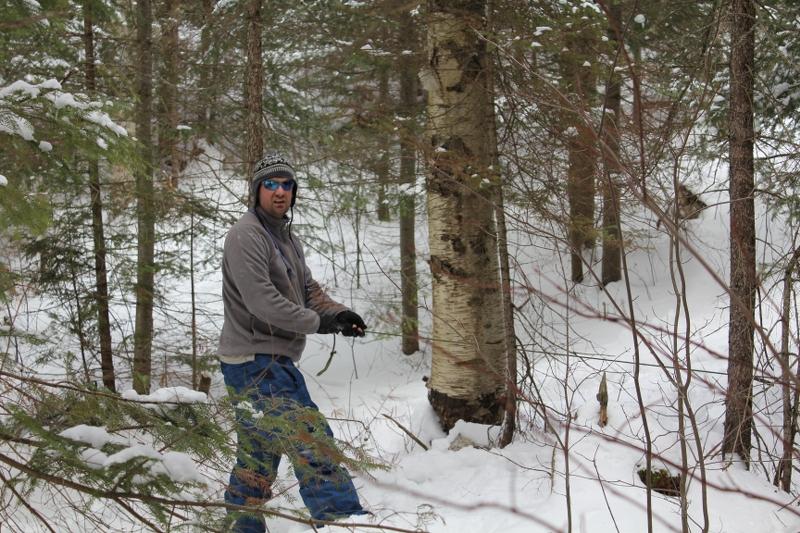 Jeffrey pulling a train of gear across the Pinetree Lake portage

Jeffrey tried - but failed, as we all did 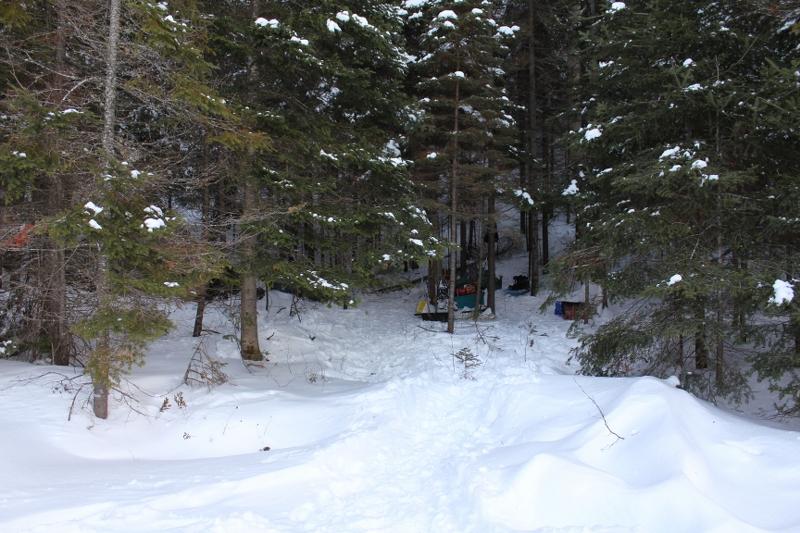 By 11am we hit the trail to Pinetree Lake. The portage itself is about 2km then we planned to traverse the lake and find a suitable place to make camp. For the most part the going was easy, the trail started out flat then just passed the halfway point slowly descended to Pinetree Lake. I was happy with how my sled was working – as were the other guys. It took me a little getting used to walking around while wearing snowshoes as I have never done it before. It seems like it should be easy enough but there is a slight technique or ‘knack’ to it – you need step with your toe pointed down then pull forward while keeping appropriate space between your feet. It took a few minutes of trial and error but eventually I found that sweet spot and crossing the trail became much easier. At the end of the portage the trail takes a sharp turn on a slope as it drops down to the lake. This section proved to be difficult for all four of us to navigate without our sleds sliding off to the side and down the hill. Markus and Scott went down to lake level first, then Jeffrey made an attempt – but his sled-train derailed and slipped down the embankment. Once he recovered it was my turn and yup – same thing happened. I found the snowshoes we’re great for walking in a straight line on flat ground, but not so great for those times you need to be agile – say, while rescuing a tipped sled on a 45-degree slope.

It was shortly after 5:15 in the morning when Markus picked me up at my building. Today we were headed up to Pinetree Lake in Algonquin Park for the next four days – but not before picking up Jeffrey at his place and meeting Scott at the West Gate. It was still very dark out when we arrived at Jeffrey’s house and he was nowhere to be seen. Given that it was still before 6am we opted to call his phone several times as opposed to knocking on the door – we didn’t want to disturb any other members of the house in our excitement to go camping. Five or six calls later, he finally answers and says he’ll be out in a minute. Several minutes pass but eventually Jeffrey makes it out the front door – we loaded his gear and hit the road. A quick stop at Tim’s before hitting the highway then a direct drive to the West Gate for our permits. 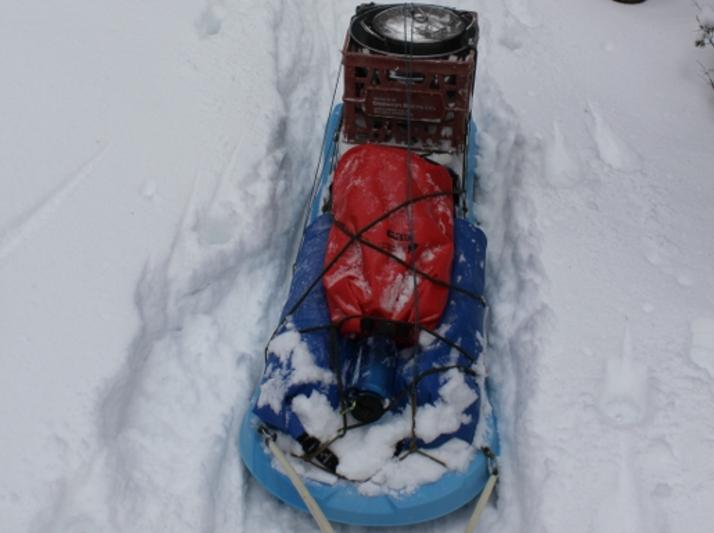 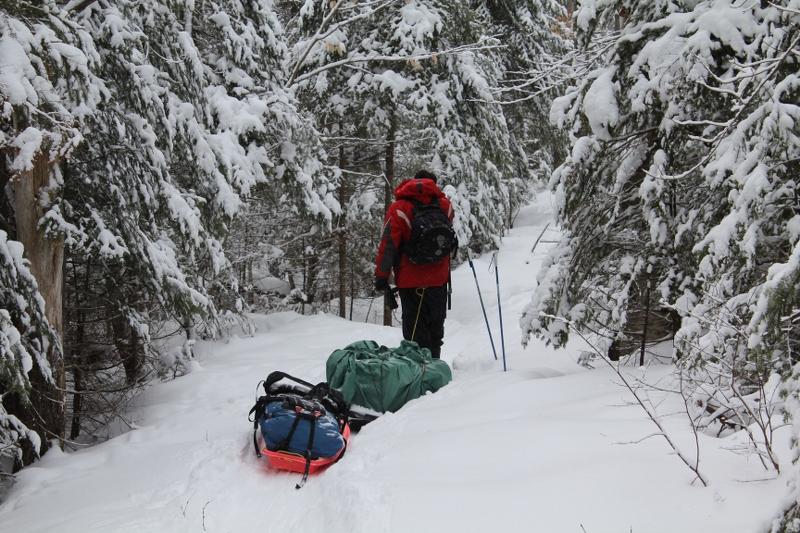 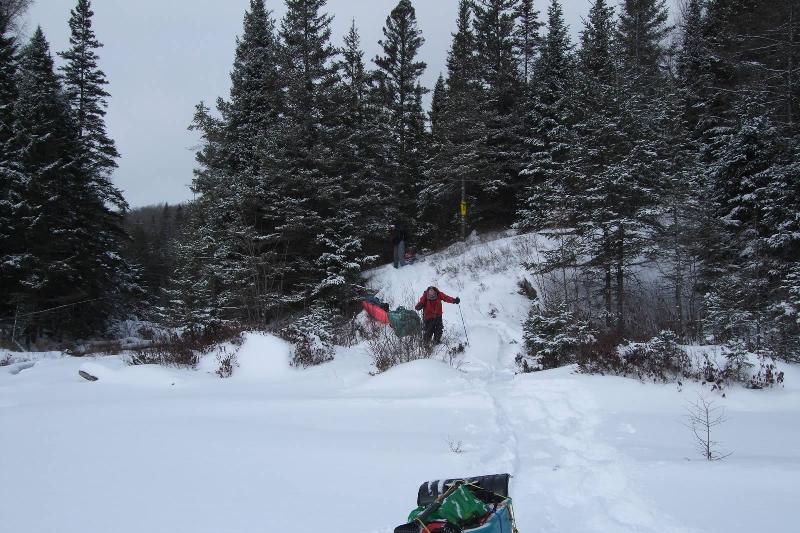 The tent ready to go with the wood stove fired up!

Our gear scattered about the campsite 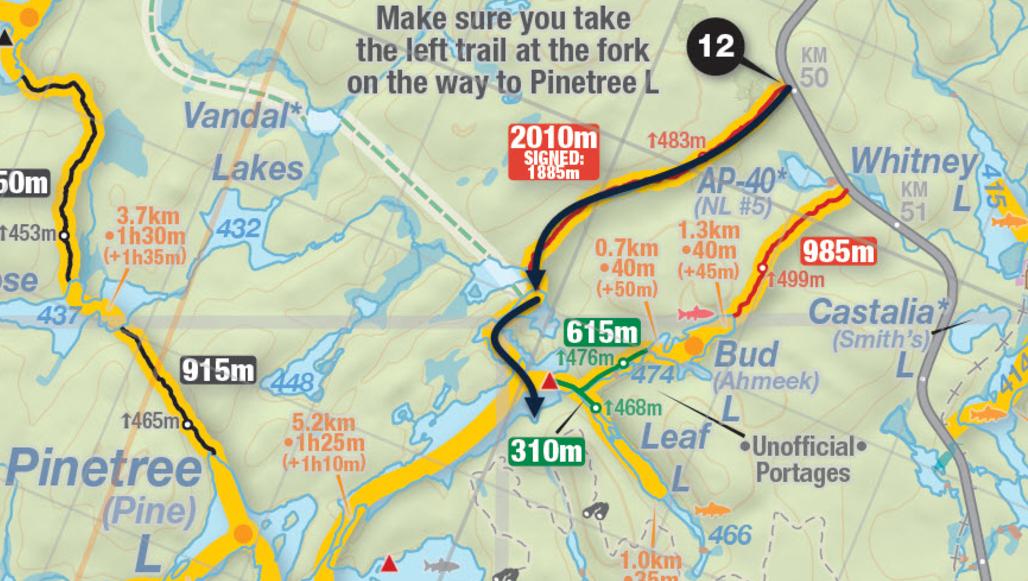 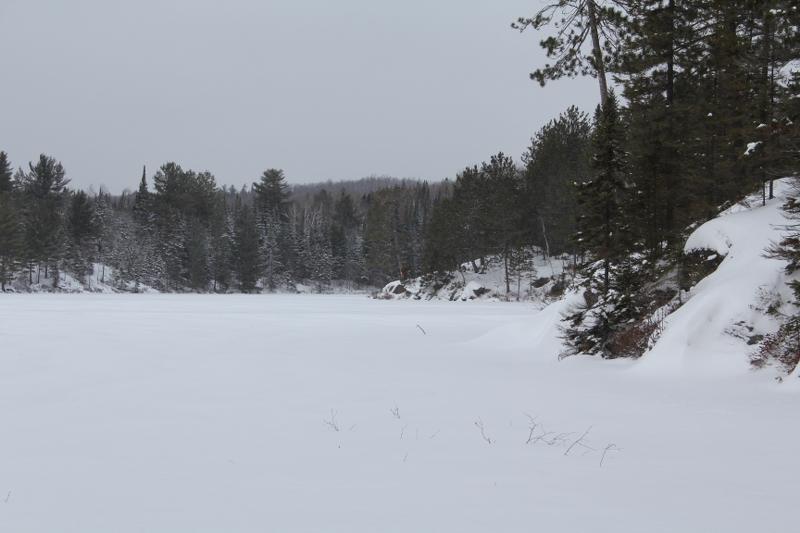 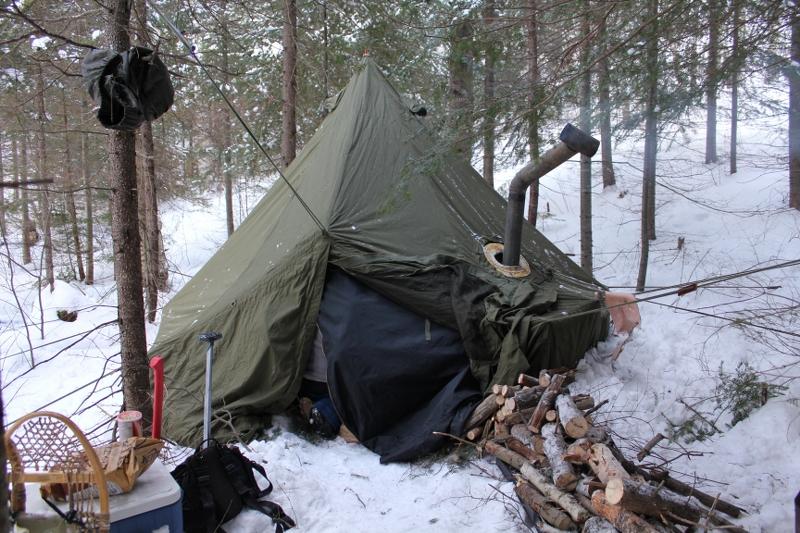 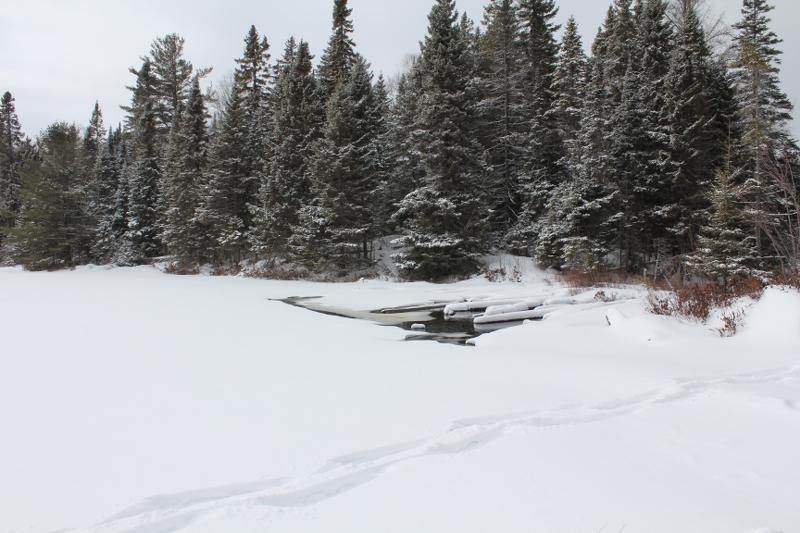 Taking a much needed break down at lake level 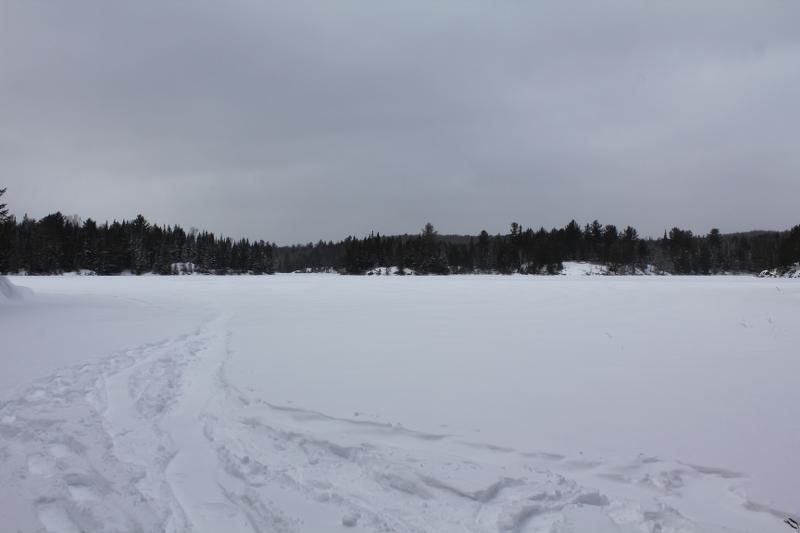 With all four of us now down at the lake level, Markus broke out the ice-breaker and chipped a hole into the lake ice to check the thickness. After a few minutes of chipping away he finally found liquid water and discovered the ice to be about 9 inches thick – more than sufficient for travelling across the lake. After a quick break and some snacks, we continued on with our journey. We wanted to find a place to make camp in the main section of Pinetree Lake but we also wanted to be close to a campsite for use of the thunderbox – its just easier that way in the winter. We rounded the corner of the first little bay and reached Pinetree Lake proper, scouting the shoreline for a possible place to make camp. Ideally, we wanted to be protected from the wind and there aren’t many ‘flat’ places along the shoreline of Pinetree Lake – in fact, there seem to be more ridges around this lake than any other. We continued south and found a tiny little bay south-west of the eastern-most campsite. As we approached the bay we could see the land stayed flat for a few dozen meters before becoming one of the many ridges in the area – this place would suit us just fine.

Our home under construction 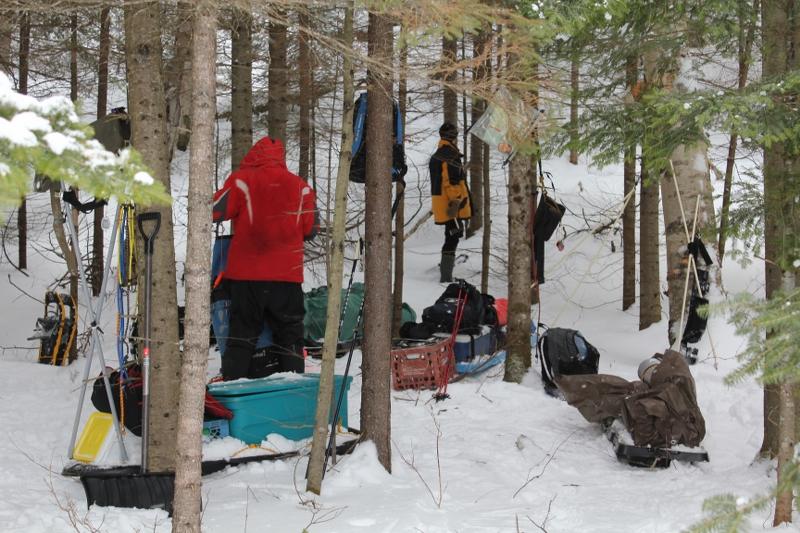 It didn’t take us very long to get from the car to the campsite, maybe a few hours but we were in no rush. With our camp location selected, we kept our snowshoes on to stomp down an area for the tent. While Markus took care of erecting the hot tent and stove, Scott, Jeffrey & I began the process of collecting fire wood. It was around 2pm so there was still plenty of light left to get things in order. Around an hour later the tent was ready to go and we had a decent start to a wood pile. Considering I mostly solo camp, I was amazed at how much wood three people can collect and process in an hour – but it still wouldn’t be enough as we were expecting temperatures below -30 overnight. One by one we set-up or little corners of the tent and instantly felt right at home in the middle of the forest. With the chores complete, bartender Scott busted out some Coca-Cola to mix with our booze and the party began. With the bit of daylight left we continued to collect and process wood. 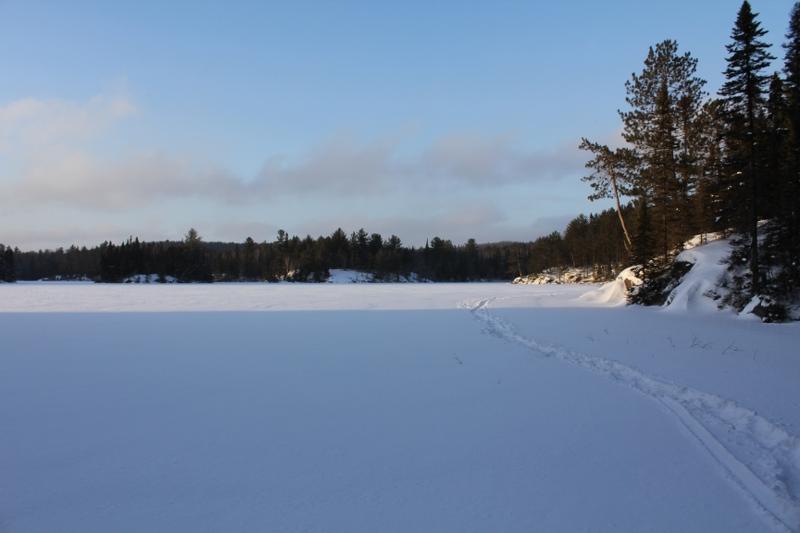 The clouds finally lifted and revealed a blue sky

Looking back at our campsite from the lake

Open water near the portage landing

After a typical winter drive up highways 400 & 11, then across 60 we arrived at the West Gate by 9:30am.  Scott was already there waiting for us, but not for very long. We chatted for a bit then went inside and obtained our permits from Kevin – great guy, he knows a ton about Algonquin Park. With permits in hand we made the 50km drive the access point. The highway 60 corridor is beautiful no matter the season – but it’s especially scenic in the dead of winter. Around 10:30am we finally arrived at our destination - Pinetree Lake. This access point is not signed at all and its easy to miss – its nothing more than a very small driveway. It would be nice if AP management could get a sign made for it. We were the only two vehicles in the parking lot so it looked like we were going to get some solitude on this trip. We parked the vehicles and once again began to chat for a few minutes. The trip was about to begin!

​After we got all caught up with each other, we unpacked the vehicles and sorted all the gear to be loaded on the sleds. Since we we’re using a hot tent, it took up most of Markus’ sled so we spread out the remaining gear among myself, Jeffrey and Scott. I wasn’t sure how much to put on my sled as this was my first time using one, so I kept it low. Markus took one look at my load and chuckled while saying, ‘Yeah… you’re going to need to take more than that!’ I laughed and said, ‘Really?’. I wasn’t trying to be lazy or not pull my weight, I just didn’t realize how much stuff we had to haul in – gear kept appearing, but we needed it. I took a few extra crates of random items and stacked them on my sled. For the most part all the weight was packed low, but the crates were stacked and they had me worried they would tip over on uneven ground. I used a good amount of rope to secure the sled and I was confident it would work. Markus and Scott had their sleds ready to go and Jeffrey had a train of sleds – he was pulling two of them!

Given that it was the middle of February, sunset was at 5:50pm which pretty much made it dark by 6:30pm. At this time, we decided to head into the tent and get warm – the stove had been going for a while now and the tent was a cozy 16 degrees, while outside it was closer to -19. Following a great first day we were now very hungry and Scott was up first for making dinner. He whipped up a Chicken & Shrimp stir-fry that was second to none – a fantastic meal thoroughly enjoyed by all of us! One thing I love about winter camping over summer camping is the total lack of dishes! Too challenging to try and wash dishes in the winter, you’re better off just bringing paper plates and burning them when you’re done. Since our fire was in the tent, we placed the plates and other garbage in a bag to be burned off the next day. Scott mixed up a few more drinks and we chatted for a couple more hours – stories of our trips from the previous year and our planned trip for this year – all in all great times with great friends. Slowly but surely, one by one we all passed out.