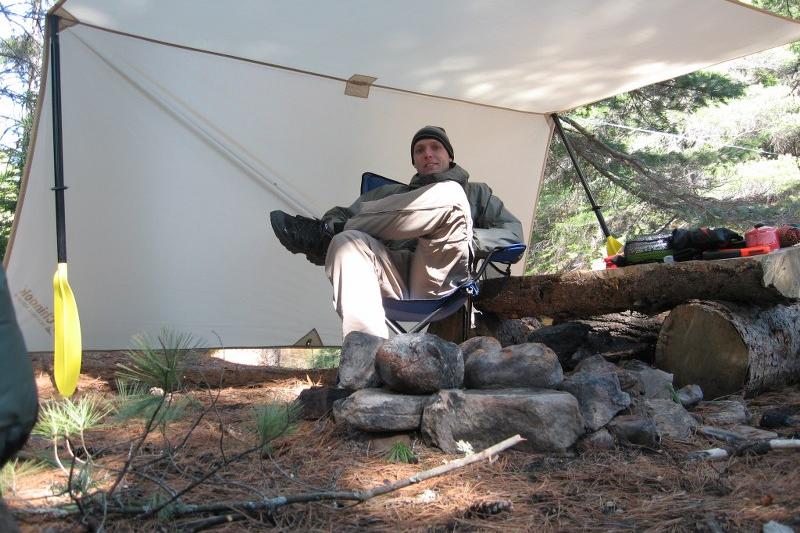 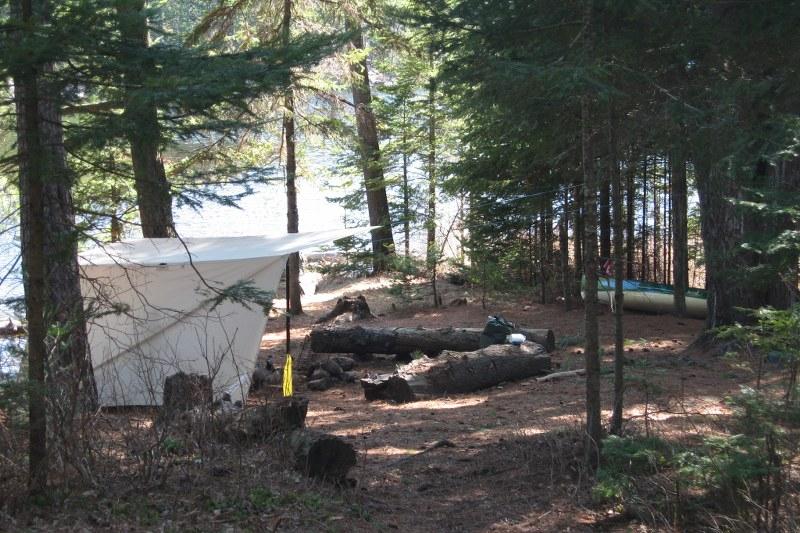 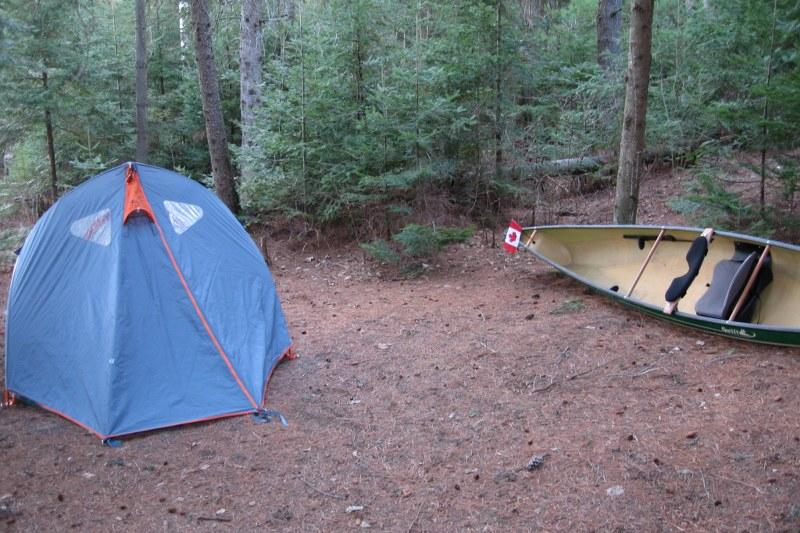 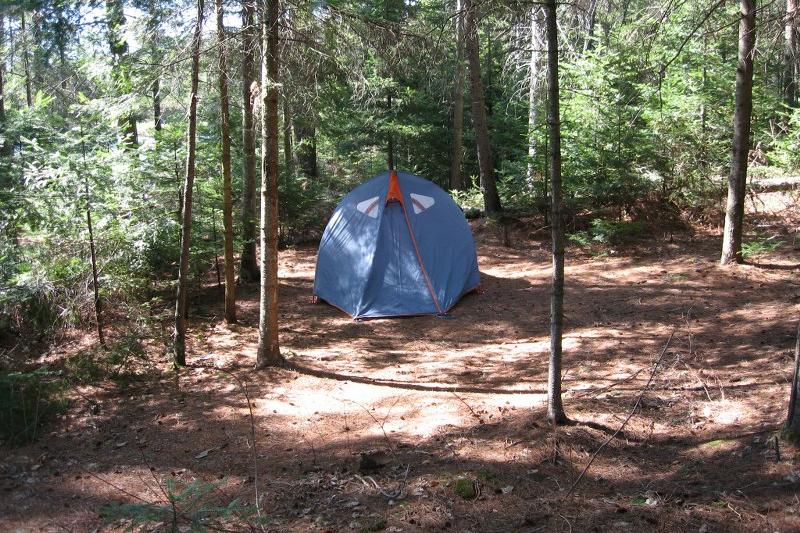 I finally arrived at Tom Thomson Lake a little after 1 p.m. My intention was to camp on the northern campsite on the island in the south end of the lake. I had read good things about this site on a forum, so I thought I’d check it out for my first night. Did I mention it was windy today? The campsite on the island was heavily exposed to the winds and when the air temperature is already a little cool, it makes the campsite less ideal for the conditions. I thought the site on the southern side of the island might be better protected from the wind, so I paddled down and around to go check it out. It was just as windy because the wind was being funneled between the shore and the island. I decided my best bet would be a site facing south with thick forest behind it. So I paddled across the lake to the point that separates the north half from south. I checked out the eastern site and I did not like it. It was too small. I got back in my canoe and paddled across the bay to check out the campsite at the mouth of the creek to Bartlett Lake.  It was a very large site, with plenty of level tenting areas. The location of the firepit was near the creek to Bartlett and the winds were a little strong there due to the openness of the forest. Almost everywhere else along the campsite the winds were not present. I set up a wind blocking tarp near the fire and it proved to be very helpful. I took a walk to the thunder box and I found it was surrounded by logs, creating a 3-4 foot privacy barrier – I suppose this was because the forest was so open in that area. Next I set-up my tent away from the winds, tucked in the forest. I was really happy to be on an Algonquin Campsite for the first time since a long winter. I decided it was time for lunch.
​

I continued north, passing cottage after cottage. This was my first time paddling a lake with cottages on it and as much as I’d love to be the owner of one, they really take away from the true Algonquin Lake experience. I much prefer seeing nothing but an orange campsite sign here and there plus the odd yellow portage sign. I arrived at the portage to Joe Lake just after 11 a.m. I decided that since it was only 260 m I would double carry it. I brought my backpack over and returned for my canoe. The whole portage taking about ten minutes. I stopped at the Joe Lake end for a quick snack of a large pepperoni stick and some water. While eating I walked over to the old dam and I noticed it was not flowing as much as I had expected given how early in spring it was. On my way back to the portage landing, my canoe came into sight. I began to rate my experience with it so far and I came to the conclusion that I was really happy with how it was performing in this strong headwind. To be fair, I knew I would love it as I had rented one last September and at the end of the trip I said to myself “When I buy a canoe, this will be the one.” Little did I know, less than three months later I would place an order for one of my very own. I launched on to a windy Joe Lake and once passed the bridge leading into Joe Lake proper, the wind intensified. Although I was solo, by using the double blade paddle I was able to maintain a good pace, but beginning to feel tired and requiring more breaks.  While passing through Teepee Lake I could see the cabins of Camp Arowhon and wondered how alive it must be in the height of summer. As for now, the camp was deserted and the cabins were awaiting their first occupants since the long, cold winter. I thought perhaps I’d get a break from the wind in the Little Oxtongue River and Fawn Lake. The wind did subside a bit while passing through the Little Oxtongue River and seemed almost gone while paddling through Fawn Lake. I took note of how close all the campsites are to one and other. This is not somewhere I would want to be if all, or even a few, campsite were occupied. You would easily be able to hear everyone, and it would be much less enjoyable. Perhaps it’s not a bad area to host a gathering though. I kept to the western shoreline when passing Little Doe Lake and I finally arrived at the beaver dam in the narrows between Little Doe and Tom Thomson Lakes. Once I made the simple life-over I spotted a Cow Moose along the northern shore munching on some underwater plants. She didn’t look too good. She was missing a lot of fur in large patches. I figured she endured enough stress over the winter, so I kept more of a distance than I normally would. I snapped only a couple pictures and continued on my way, leaving her to enjoy her lunch.

Lower side of the Joe Lake dam 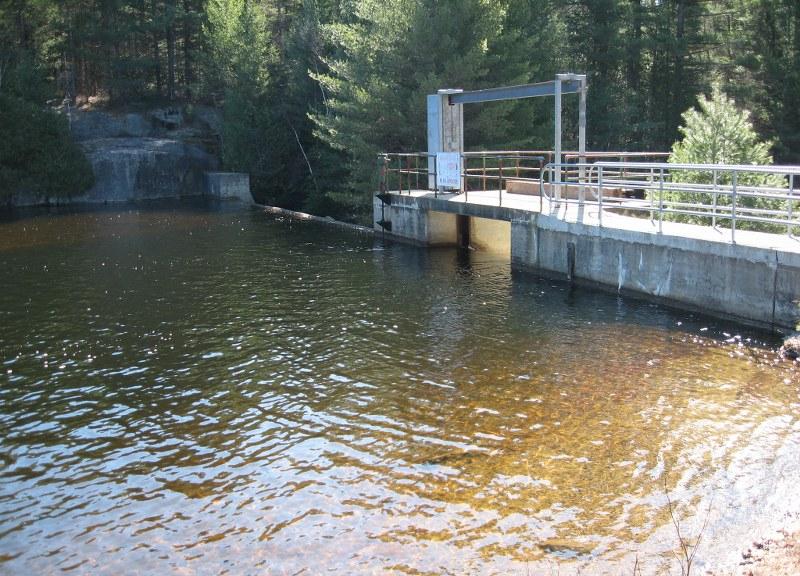 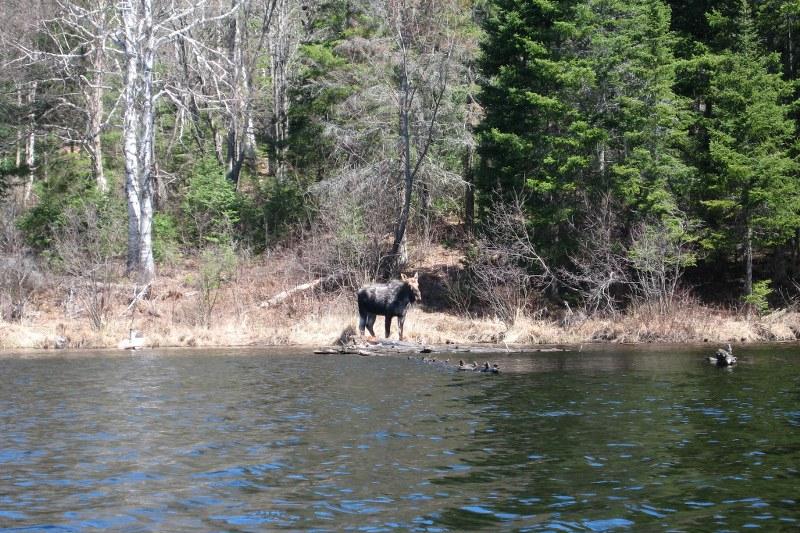 My new canoe, ready for her maiden voayage! 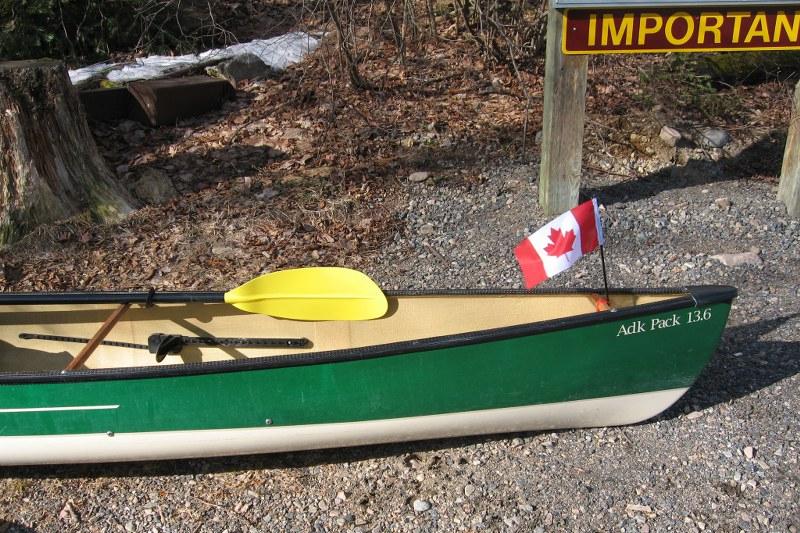 For this trip I brought a few items I would not normally bring had it been a longer trip, or a summer trip. I did this because the route was to be very easy with only one short portage and it was going to be cold, so I wanted the extra comport items. Among those items was a folding camp chair and it proved to be very useful. The easy route also enabled me to take a little extra weight, as well as some foods that would otherwise spoil in the heat of the summer.  For lunch today I had a deli meat sandwiches consisting of regular and hot salami as well as Montreal smoked meat. I warmed the meats over the fire, toasted my bagel and sliced up some marble cheese. I topped the sandwiches with mustard and it had to be one of the best lunches I’ve ever had in Algonquin. It’s amazing how something so simple at home can be much more satisfying while out in the wilderness.

It was close to 3 p.m. and decided I would fill my six litre dromedary bag for the next two days. Pumping six litres of water didn’t take as long as I had expected, probably 15 minutes or so. With the water pumped I spent a good amount of time gathering more fire wood and preparing it for the night. I had collected enough for the morning fire as well. It’s nice not having to work so hard for wood, but it’s important not to go over-board and burning it all needlessly.  Firewood was easy to find because it was so early in the year and campers have yet to have the chance at harvesting the deadfall from winter. I didn’t have to use my saw on this day; I simply found sticks and twigs and made my fire from them.  Next I hung my bear rope about 50 feet behind the campsite and left it for later on when I would return to hang my food and cookware. I had brought along a fire stick for this trip (and of course a lighter) and only intended to start my fires from the stick. I had seen it done many times and knew it could not be very hard. I retrieved some birch bark from the ground, crinkled it between my palms and placed it on the firepit floor. I collected tiny twigs for when the birch bark caught the sparks, then a series of larger twigs and sticks along with small logs. With all my preparations complete, I made about a half-dozen strikes on the fire stick and the birch bark caught a spark. I had fire without using a lighter! Awesome!  I sat around for a few hours and after a dinner of Mr. Noodles (I had a big steak, red pepper and corn on the cob scheduled for tonight, but I was too tired to enjoy it, so I saved it for night two) I made a mug of hot chocolate while watching the last few logs burn down. Since I was really tired from both my terrible sleep last night and my 15 km paddle against the wind, I decided to head to bed a little early. I hung my food pack and cookware in the tree and I hit the sack at around 9:30 p.m. I slept through most of the night without incident except for one very cold outing for a pee around 4am (-3) then I hurried back into the coziness of my sleeping bag.
​ 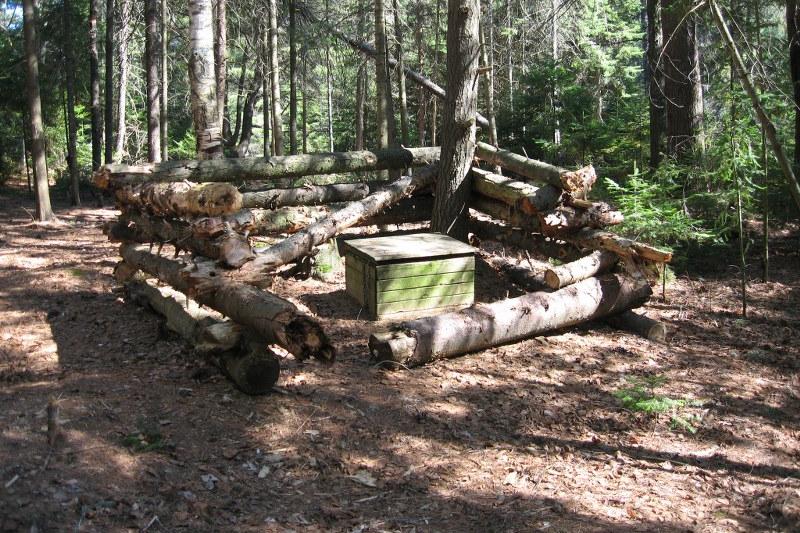 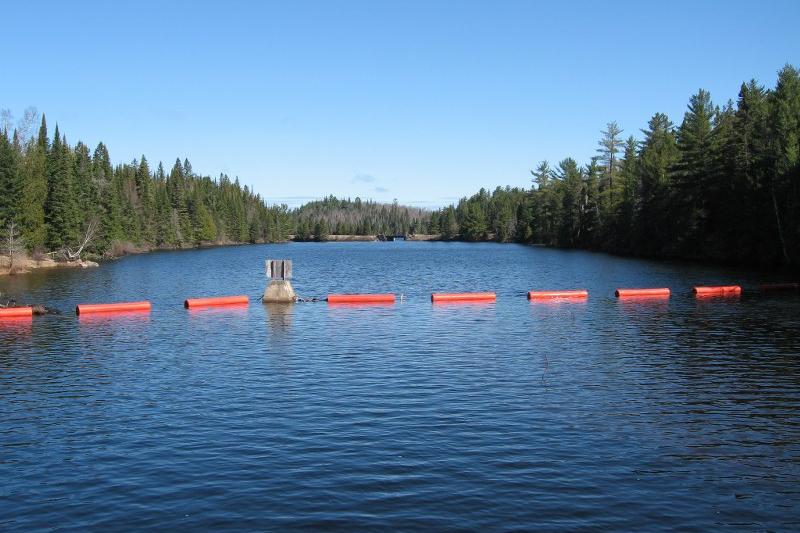 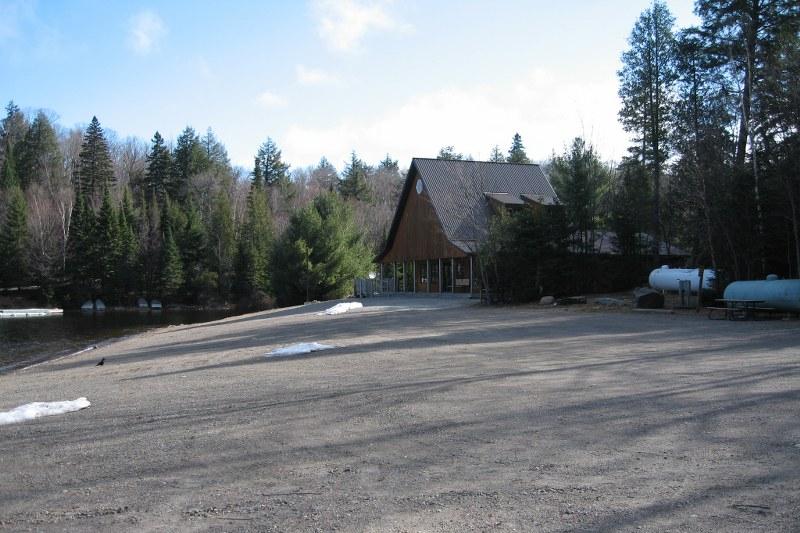 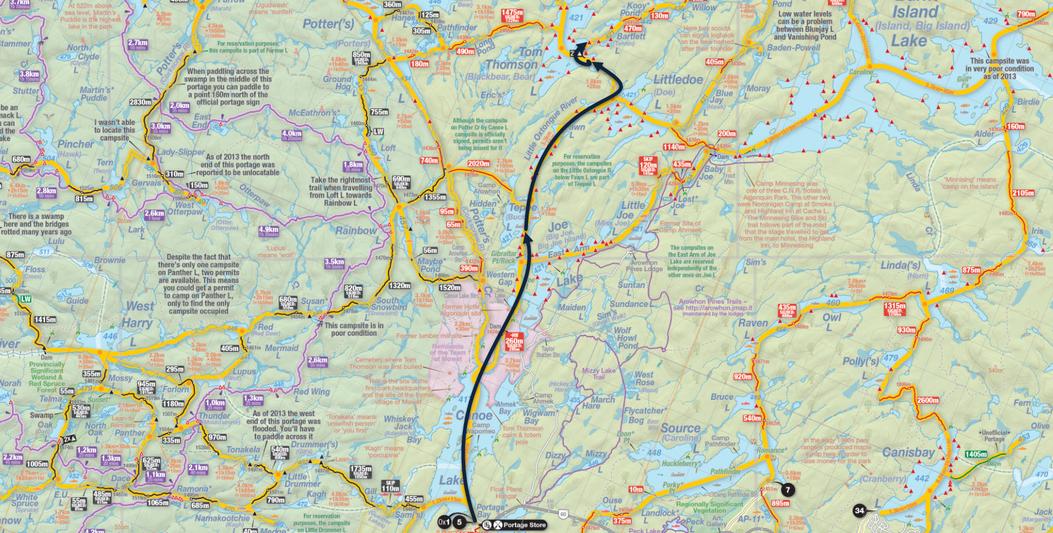 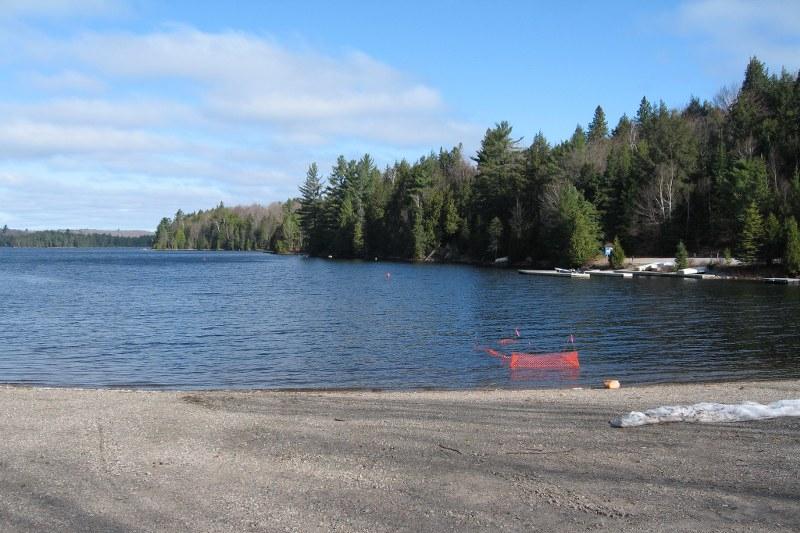 A great place to hide from the wind

Upper side of the Joe Lake dam 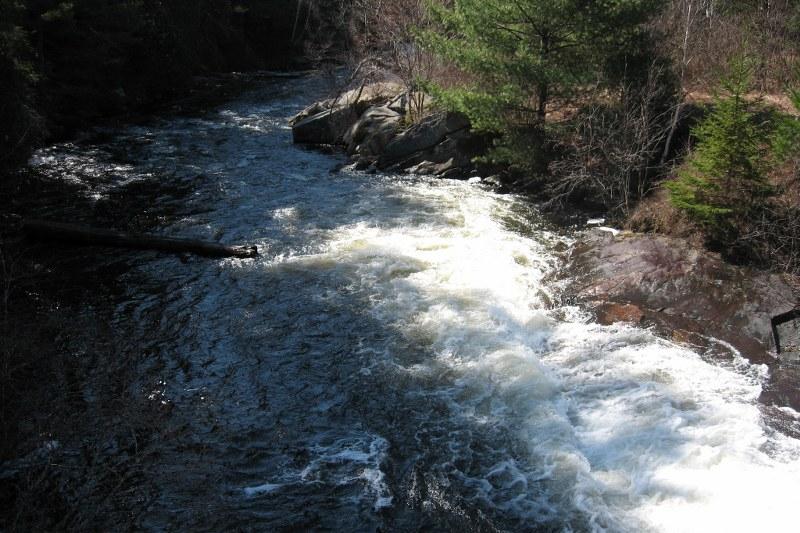 This was my first time launching on Canoe Lake and only my second time launching along the highway 60 corridor. I prefer to seek the most remote and out of the way areas in The Park, well away from highway 60. I enjoy the low-maintenance routes as I find them to be a little more of a challenge.  However, I had the need to cross this area off my list simply due to rich history here. I figured since this is such a high-traffic area in the summer, perhaps now is the time to explore in peace. I launched on a windy Canoe Lake at exactly 10:00 a.m. It was a bright and sunny day with a cloudless clear-blue sky. I was welcomed by a cold and strong headwind. It didn’t take me long to realize that this might be a windy battle all the way to Tom Thomson Lake, as the route is generally heading north (and into the wind) the entire time. “It’s better than a cross wind”, I thought. I made my way up the lake, staying close to the eastern shore. I would try to hide from the wind behind a few islands to catch a break and have a little water. I crossed Ahmek Bay and approached the point where the Tom Thomson cairn is... or was supposed to be.  I don’t know where it was and all I saw was a red steel frame filled with rocks to weigh it down. I suppose the remove the cairn for the winter? I was a little disappointed to say the least.

Launching into the wind!

It was a sunny, but cool weather forecast for the next five days that inspired this trip. Throughout the winter I had planned to canoe in Algonquin on Easter Weekend but without the record-early ice-out, it was merely a dream. I was even more excited than usual to get to The Park this year because I had purchased a new canoe (Swift Adirondack Pack 13.6). I’ve been waiting all winter for the chance to paddle an Algonquin Lake for the first time in my very own canoe. Mother Nature must have felt my anticipation as not only did we have an early ice-out, we had the earliest ice-out ever recorded – beating the old record by nearly two weeks! And thus a trip was born.