Back to All Ruins
Continue to
Basin Depot Cabin 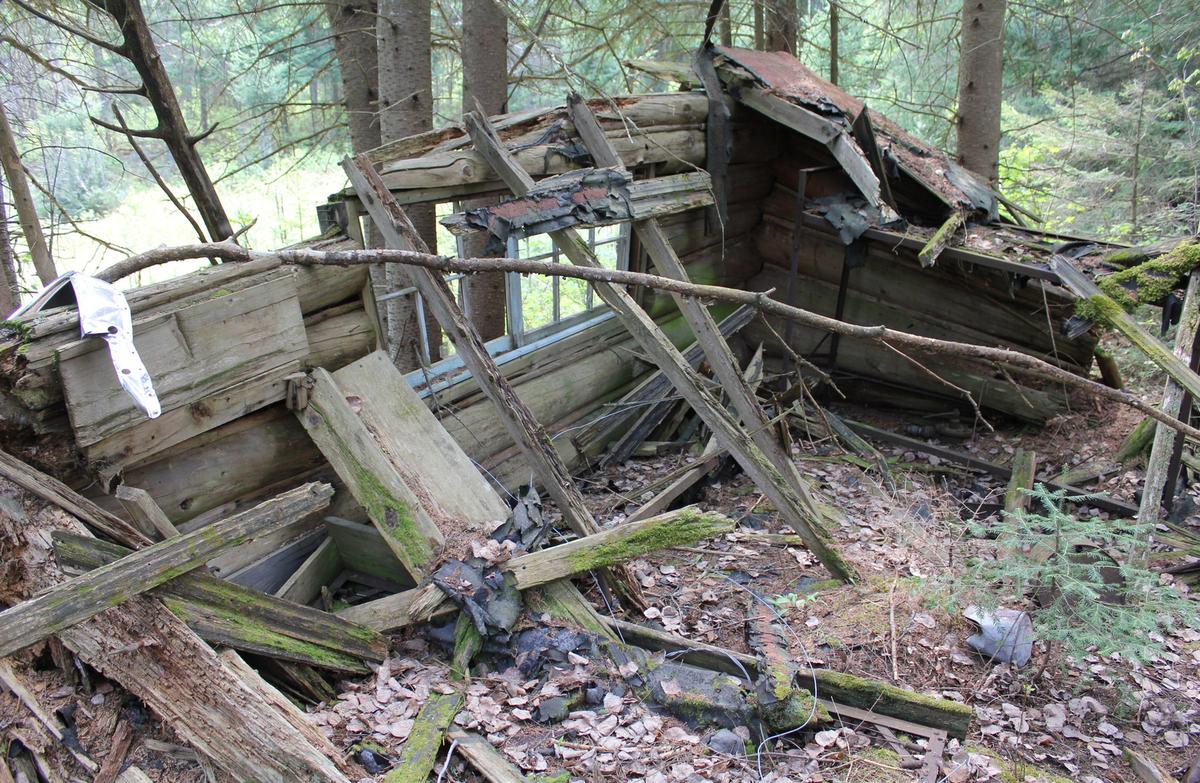 Let's begin with The Standard Chemical Co. (or S.C.Co.) and their history in the area. They were located in South River with their logging railway and operations extending into Algonquin Park to their timber berth. Anyone who has driven on Chemical Road from South River to Access #1 (Kawawaymog Lake) was driving on the what used to be the old S.C.Co. logging railway line. Their Camp #10 along with another camp were used as P.O.W. camps in 1943. The S.C.Co. had other camps east of the P.O.W. Camp after the rails were removed in 1946 and a truck haul route was established. They also had a camp further up river at Winnifred Lake. The Turner Lumber Co. ran log drives 1902 - 1907 on the South River prior to S.C.Co. receiving the Berth and the nearby dam remnants would have been  constructed by them and abandoned in 1907.

​The S.C.Co. built a new saw mill in South River in 1924/25 and slowly started to extend their railway from their new camp #1 at Music Lake into Algonquin Park. By 1946 they operated and abandoned 17 camps - most of which were outside the park - however camps 9, 10, 11 & 16  were within Algonquin's boundary. Sometimes the end of the steel (railway line/tracks) which ended about two miles from camp 10 was referred to as camp 18 because there were hay sheds and other storage buildings there but no cookery or bunkhouses.

Due to the shortage of manpower during the war, the S.C.Co. requested prisoner labor from the Federal Department of Labor. There were three classes of P.O.W. camps in Canada: Black, Grey & White - all based on the prisoners degree of Nazi indoctrination. Black being officers and full fledged Nazi's, while white was reserved for the least threatening. S.C.Co.'s allotment of prisoners were deemed to be 'white' or low security risk individuals. None of the S.C.Co. camps had even a wire fence. The whole bunch at camp #10 were German Merchant Mariners, most of them had been interned in other camps in Northern Africa and even some in India. When Rommel invaded Africa the Allies moved all the prisoners out. All of the prisoners at camp 10 could speak broken English.

Most of the black & white P.O.W. Camp photos above were taken by a local boy (age 16 at the time) with a brownie camera. Although blurry they are to date the only photo records of the camp that have surfaced. Several WWI veterans were housed at the camp to guard the prisoners, they were armed with 303 rifles. These fellows stayed in their own cabin and cooked their own meals. An Algonquin Park Ranger, D. Stringer, also kept a cabin at the camp  but he took his meals with the prisoners along with employees of S.C.Co.  The 16 old camera fellow was an employee of the S.C.Co. and was a camp clerk scaler as well as an unarmed bush guard. He went to the bush every working day with the prisoners. The armed guards seldom went to the bush, but all infractions of the rules, sick days and attendance was all reported to them. The P.O.W.'s had Sundays off and often took bush hikes etc. One became lost in the bush for about 7 days and was found about 10 miles from where he was last seen by his mates. One other fellow did escape in 1944 but was recaptured in Windsor, Ontario. At Camp 10 the task was to cut cord wood for the chemical plant and the P.O.W.'s carried out all operations without civilian workers. While at camp's 9 & 11 - both being logging operations - they had civilian teamsters working with the P.O.W.'s.

None of these prisoners were allowed to stay in Canada and they were all shipped back to Germany where a lot of them assisted in the Allied reconstruction following the war. In March of 1945 there were 30,623 P.O.W.'s and 3,149 Merchant Mariners still in Canada.

The son of one of the P.O.W.'s that worked in one of the S.C.Co. P.O.W. Camps was moved (along with his father) to some other camp in South River where he and his father had escaped and remained in Canada. After being on the loose for seven years he turned himself in to the RCMP. By that time he had married a Canadian girl and they had a family. Being a good citizen for the intervening 7 years, the RCMP let him go and he became a naturalized Canadian citizen.